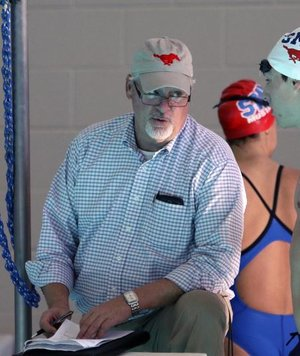 SMU coach Eddie Sinnott has been selected by his peers for the 2019 National Collegiate Scholastic Trophy, which is presented to the coach who has made "the greatest contribution to swimming as a competitive sport, and as a healthful, recreational activity in the province of undergraduate and scholastic education. Current photo via SMU Athletics

Eddie Sinnott, the longtime men’s swimming coach at SMU has been selected by his peers for the 2019 National Collegiate Scholastic Trophy. The trophy is presented annually by both the CSCAA and the National Interscholastic Swimming Coaches Association (NISCA) to the coach who, in the estimation of the recipient’s peers, has made “the greatest contribution to swimming as a competitive sport, and as a healthful, recreational activity in the province of undergraduate and scholastic education. Sinnott will be recognized at the 59th Annual CSCAA Awards Banquet on March 6th in Myrtle Beach.

For the past thirty years Eddie Sinnott has led the SMU men’s team.  The sixteen-time conference Coach of the Year has led SMU to 16 league crowns in the past 22 seasons.   A lifelong Mustang, Sinnott was the Southwest Conference Champion in the 400 IM in 1973 and earned CSCAA All-America honors for SMU in 1973 and 1974.

Sinnott’s impact on the sport, however, extend well beyond his conference titles, Olympic Gold Medalists, and All-Americans. Sinnott, along with women’s head coach Steve Collins, was instrumental in fundraising for the new Robson & Lindley Aquatics Center and Barr-McMillion Natatorium.

Sinnott has devoted his life to the sport of swimming.  Former assistant Andy Kershaw explains “Eddie continually pushes both his student-athletes and his competitors (coaches) to push the boundaries of our sport while still maintaining the foundation of our sport. The time, energy and passion he has devoted have been life changing for those who have the privilege of interacting with him.”

Beyond the college teams, Sinnott helped teach in the SMU swim lesson program for most of his forty years on campus. This included working with youth who lacked any swimming experience. Sinnott has spent countless hours in the water teaching children how to be safe in and how to love the water. Said Kershaw, “Eddie always made sure to give those children time to play and develop a love for swimming in general.”

“We are delighted for Eddie that he is being recognized for his contributions to collegiate swimming,” SMU Athletics Director Rick Hart added. “He has significantly impacted our university and community during his time on the Hilltop and his lifelong dedication to the sport has shaped the lives of hundreds of students.”

About the CSCAA
Founded in 1922, the College Swimming Coaches Association of America (CSCAA) is the first professional association of college coaches the United States. The CSCAA is dedicated to serving and providing leadership for the advancement of the sport of swimming and diving at the collegiate level.

The CSCAA works to

Give him the trophy and an excedrin