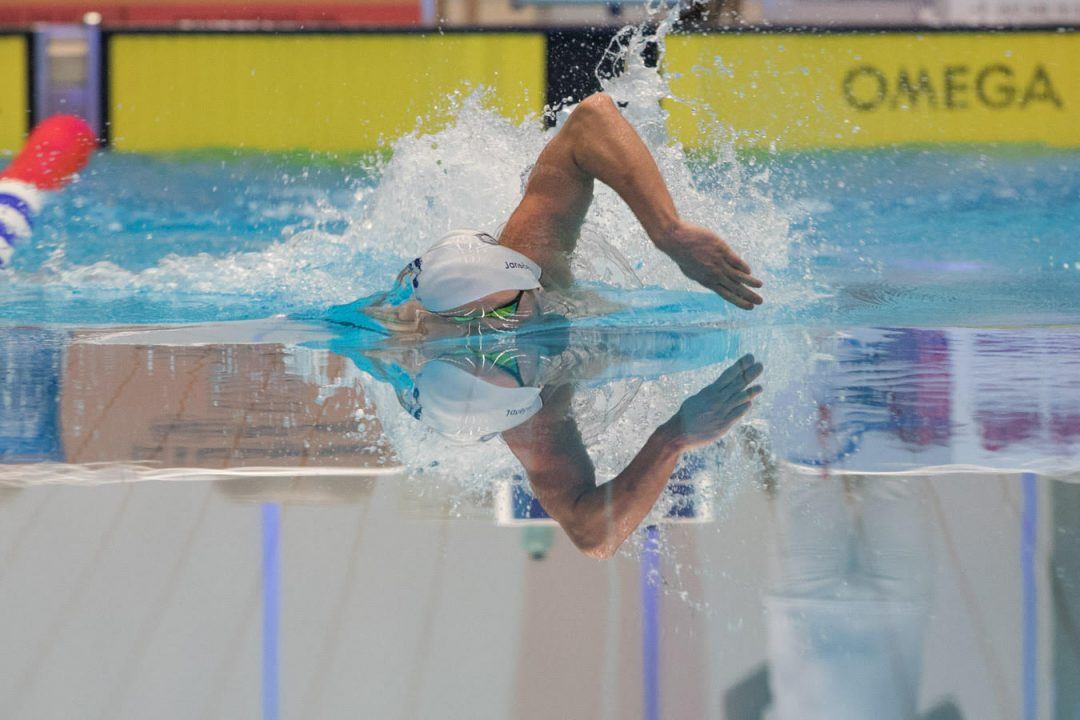 The SMU men’s swimming and diving team hosts Texas A&M in its last dual meet of the season Friday at... Current photo via “Rafael/Domeyko Photography”

The SMU men’s swimming and diving team hosts Texas A&M in its last dual meet of the season Friday at 6:30 p.m. CT at the Mansfield ISD Natatorium. The Mustangs are 3-0 in dual action this season with wins over Connecticut, TCU and Incarnate Word, while the Aggies are 3-1 in dual events. Live results can be found at SMUMustangs.com or on the Meet Mobile App by searching “SMU Men vs Texas A&M”.

LAST TIME OUT
The Mustangs improved to 3-0 in dual action this season with a 177-114 victory over Incarnate Word on Jan. 11. Junior Jonathan Gomez led the way for the Mustangs as he posted wins in three events, coming away with victories in the 1,000 free, 200 fly and 200 IM.

Simon Golczyk led a trio of Mustangs including Ziga Cerkovnik (2nd) and Garrett Carson (3rd) on the podium in the 100 fly, and Bartosz Krzyzaniak doubled for the Ponies, sweeping backstroke events. In the 100 breast Ziga Cerkovnik paced the field, which included Mustangs in the top four positions.

Sprint freestyle events went to Ralph Koo (50) and Nick Badsky (100), and in relay action, SMU won the 200 medley relay to open swimming events, and closed the afternoon with a win in the 400 free relay.

For the third time this season, Bryce Klein swept diving events in a dual meet with wins on 1 and 3 meter.

SCHOLAR ALL-AMERICA
The men’s swimming and diving program has earned the first of two possible College Swimming Coaches Association of America (CSCAA) team awards this season. To be selected as a CSCAA Scholar All-America Team, programs must have achieved a grade point average of 3.00 or higher over the fall semester. The Mustangs registered a 3.29 GPA placing them in the 18th spot of 86 teams listed, and positioning them above the national average of 3.22. Mustang seniors have been honored each semester on the Hilltop thus far.

WEEKLY WINNERS
Junior Bryce Klein has won the American Athletic Conference Diver of the Week honor a league-leading four times this season (Jan. 17, Nov. 22, Nov. 8, Oct. 25). His most recent award came on the heels of the Mustangs’ dual meet win over Incarnate Word where Klein won both the 1- and 3-meter events. Classmate Jonathan Gomez has the lone nod for the swimmers this season, winning the award on Oct. 25.

2017 AMERICAN CHAMPIONSHIPS
The 2017 American Athletic Conference Swimming and Diving Championships will be held Feb. 15-18 at the CRWC Natatorium on the campus of Houston. Tickets can be purchased on the American’s Championship Central page. This will be the second straight year Houston has hosted the Championships, and the event is slated to come to SMU in 2018.

MARCH MADNESS
Junior Bryce Klein will make his third appearance at NCAA ZonesMarch 6-8, after posting qualifying scores on both the 1- and 3-meter springboards at the Mustangs’ first event this season. Klein advanced beyond Zones to the NCAA Championships a season ago, finishing 17th on 3 meter. Junior Jonathan Gomez has also posted provisional standards in the 200-yard butterfly (1:43.36 (c)) and 400-yard individual medley (3:50.84 (c)) and looks to improve on those times for the NCAA Division I Swimming and Diving Championships held March 22-25.

WINTER DIVING ACTION
Bryce Klein earned a silver medal on synchronized 3 meter at USA Diving Winter National Championships. The junior also advanced to the semifinal on 3 meter, placing 10th. At the Tennessee Diving Invite, Klein was second on 1 meter, his only event of the competition.

NCAA QUALIFIERS
Nine Mustangs posted NCAA provisional standards a season ago, with Ziga Cerkovnik (50 free, 100 free, 100 breast), Bartosz Krzyzaniak (200 free, 100 back 200 back), Christian Scherubl (100 free, 200 free, 500 free) and Sam Straughan (100 back, 100 fly, 200 fly) posting three each. Stefan Popov earned B standards in the 100 and 200 breast, while Lucas Schenke achieved the status in the 500 free during his first season. Bryce Klein, Parker Meinecke and Daniel Pitts all registered qualifying scores for the Zone D Diving Championships with Klein advancing to compete at the NCAA Championship on 3 meter.

When will the SMU Natatorium be finished?