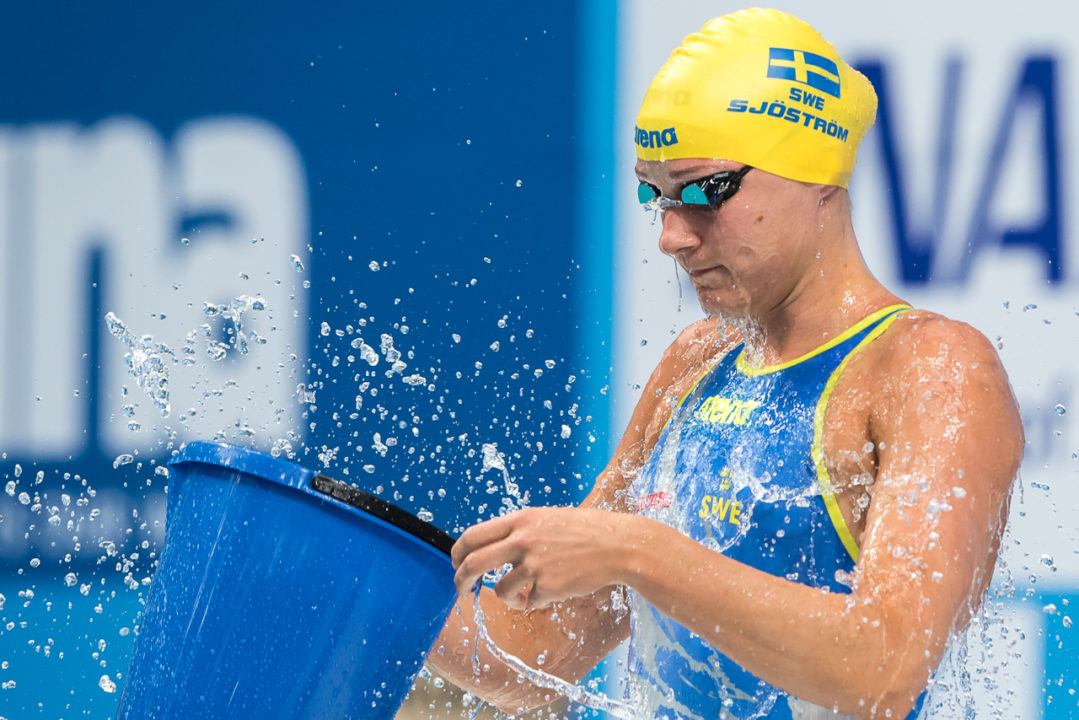 Sarah Sjostrom gets it done again, clocking 51.02 in the women's 100 SCM freestyle in Eindhoven this morning.

The final stop of the 2017 FINA World Cup Series cluster #1 kicked off in Eindhoven today, with a good mix of talent taking to the Pieter van den Hoogenband Swimming Stadium. Even with the new option of World Championship and Olympic medalists not being required to swim prelims, big names such as Sarah Sjostrom, Katinka Hosszu and Tom Shields still got wet in the morning to help prepare for tonight’s finals.

Current holder of an astonishing 8 world records, Swede Sjostrom fired off a speedy 100m freestyle morning mark of 51.02 to claim the top seed by well over a second. Splitting 24.47/26.55, Sjostrom’s time was the only sub-52 result of the field and her outing now checks in as the 4th fastest performance of all time.

Challenging her tonight will be a home country duo in Femke Heemskerk and newly-minted short course 50m freestyle world record holder Ranomi Kromowidjojo. The Dutch women sit in the 2nd and 3rd seeded positions with morning swims of 52.48 and 52.54, respectively.

However, another medal candidate enters the pack tonight, as Australian Brittany Elmslie will be inserted into the final with a seeded time of 51.81. Elmslie is the short course World Champion in this event from last year in Windsor.

The consummate competitor, Hosszu cranked out two mega swims on the morning starting with the 200m backstroke. In a field containing just 6 swimmers, Hosszu still swam her own race, slamming the wall in a quick 2:00.53 to finish a solid 10 seconds ahead of the next-fastest competitor. Her time this morning checks-in as the 15th fastest performance ever.

Ruta Meilutyte and Alia Atkinson will duel in the women’s 100m breaststroke tonight, with each woman earning an AM time of 1:04.75. Spain’s Mireia Belmonte will also be in action, having raced the 200m butterfly event this morning in Eindhoven. Even with a prelim time of 2:05.65, the Olympic champion will be seeded with a much quicker 2:01.25 time for tonight.

For the men, Marco Orsi from Italy will battle Dutch national record holder Jesse Puts in the splash n’ dash, while American Tom Shields and rival South African Chad Le Clos are set to duel in the 200m butterfly tonight.

As a side note, there appears to be some inconsistency with the finals seed times for World and Olympic champions, leading us to reach out to FINA for clarification. Brittany Elmslie, for example, is seeded in the women’s 100m freestyle event with the time she clocked when winning the short course title in 2016 (51.81). However, compare that to Mireia Belmonte’s time in the 200m butterfly for tonight and she appears on the start list with 2:01.25, not the 1:59.61 with which she won the title in 2014.

The same holds true for the men’s 50m freestyle. Dutchman Jesse Puts is seeded with his personal best of 21.05 and not the 21.10 it took him to win the title in Windsor. Morozov is seeded with a seemingly random 20.73, a mark he earned at the Tokyo stop of the 2016 FINA World Cup.

Haha I thought it was long course at first, silly me.

The funny thing is, it totally could be. She’s capable.

had the same thing here – haha

Sjostrom “only” has 7 records now. Though I’ll be on the edge of my seat this whole World Cup watching the 50 free/fly.

I think she’s going to break the world record in the 50 fly tomorrow, so then it will be 8.

Can she swim the 50free here? I think there’s a limit now to the events in a single cluster and she’s already done 50free in the last two.

Looking at the prelims results, there seems to be a large Stanford contingent of swimmers there. Anyone know why?

eh, i counted 4. ella eastin, katie drabot, kim williams, and incoming freshman grace zhao. i wouldn’t consider that to be a lot.

Well, look at the comments on the Taylor Ruck article — apparently Stanford has recruited every single female swimmer, so makes sense there’d be a large contingent of them anywhere.

Just guessing, but maybe since it is a quarter school and doesn’t start for over month.