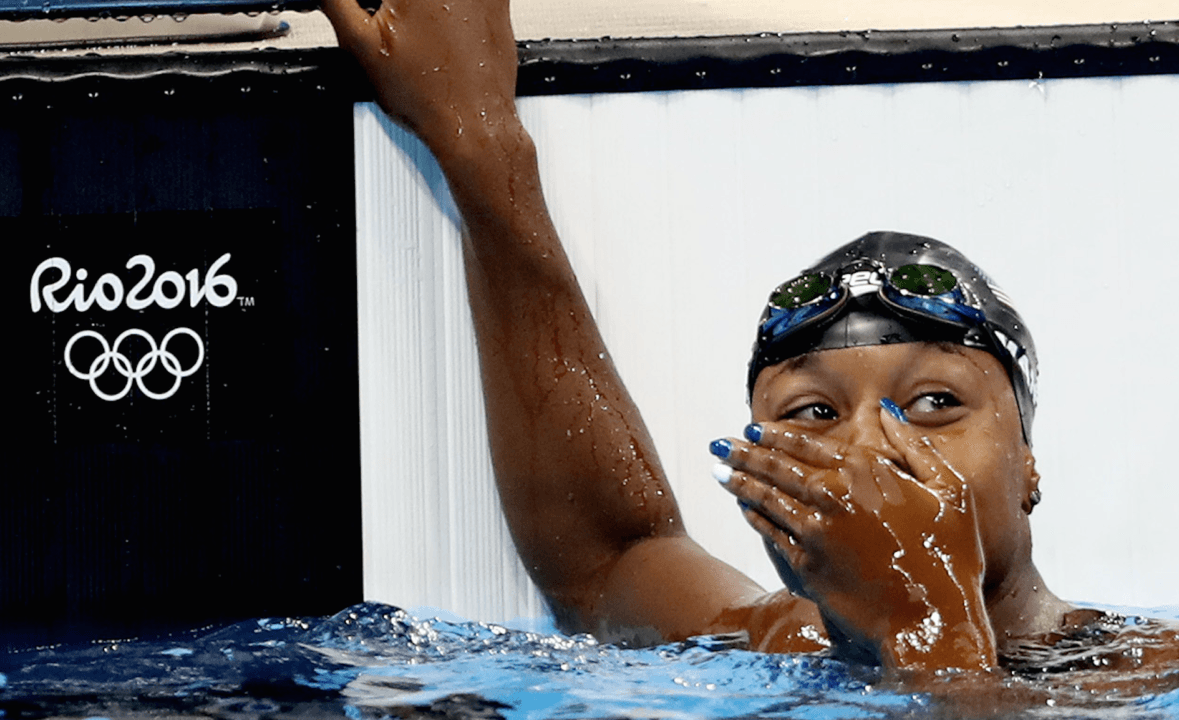 American Simone Manuel pulled a shocking upset in the 100 free to become the first black woman ever to win an Olympic gold medal in swimming. Current photo via Simone Castrovillari

American Simone Manuel pulled a shocking upset in the 100 free to become the first black woman ever to win an Olympic gold medal in swimming.

Manuel, a heavy underdog to world record-holding Australian Cate Campbell, surged into the finish for a massive persona-best in 52.70. That time tied her with Canadian teenager Penny Oleksiak for gold.

Based on our research, that marks the first time a black woman has topped an Olympic podium in swimming.

The first black Olympic swimming medalist was the Netherlands’ Enith Brigitha, who picked up two bronze medals at the 1976 Olympics in Montreal. Her medals came in the 100 and 200 frees.

It wasn’t until 2004 that a female African-American swimmer won an Olympic medal. That was Maritza Correia, who won a silver medal in Athens as part of the American 4×100 free relay. Correia, now Maritza McClendon, wrote an opinion piece for SwimSwam just last year to reflect on a historic 2015 NCAA meet that saw the first-ever 1-2-3 sweep by black swimmers in an event at the NCAA Championships.

The winner of that event? Manuel herself, swimming for the Stanford Cardinal.

The first black swimmer to win an Olympic swimming gold was Anthony Nesty, who competed for the nation of Suriname in the 1980s. He won the 100 fly at the Seoul Olympics in 1988.

More recently, Anthony Ervin became the first African-American swimmer to win Olympic gold, winning the 50 free in 2000. Cullen Jones followed him in that feat at the 2008 and 2012 Olympics, and now Manuel becomes just the 3rd overall swimmer in that exclusive group.

The shock of the meet is Simone Manuel. Last year we were saying that she always goes a 53.5. She was tagged as the hope for American sprinting in 2013. But for nearly 3 years she didn’t get any faster. At Trials she was 53.5 again, looking very unimpressive. But unbeknownst to most of us, she was not tapered for trials. For years the Americans have needed a 52 second flat start sprinter. Simone looked good but not great in the prelims. Then she had a ‘breakthrough’ 53.11 in semifinals. I thought that was all she had in her. But it is clear now that she has been preparing and focusing all year for a single moment: August 11th. I… Read more »

I would wager heavily that she was tapered for trials. But by no means let me ruin your poetic retelling of events.

I’m curious why you think she was not tapered for trials. Any inside info or just speculation?

She was slower at trials because she swam 200 free prior to her 100 free. I knew she would be faster minus that 200 free

Newsflash Simone Manuel was tied with a CANADIAN 16 yr old swimming in her first Olympics.
NBC conveniently ignores this fact .If Abby Wetzel had tied Manuel for the gold , which swimmer
Would have been downgraded to second string as Penny Oleziak of Canada was ?

How about we not talk about race?. She had a great swim. Campbell collapsed. End of story.

this article is written to talk about the race

Because African-Americans are not the only black pepole that exist in the world.

Because an African-American woman winning a gold medal in swimming is a big story.

Why? Because the media says so? Simone is an American period.

Because race is still an issue in America, and because African-Americans are still rare in swimming for a variety of reasons. It’s not just the convenient “media” scapegoat that thinks so – Simone herself knows that it’s important and said so:

“Hopefully it will get them inspired,” Manuel said. “The gold medal wasn’t just for me. It was for people who came before me and inspired me to stay in this sport, and for people who believe that they can’t do it. I hope that I’m an inspiration to others to get out there and try swimming. They might be pretty good at it.”

Afro-Americans are only 14 percent of the US population and of course do better in elite basketball and track and field. Non-Hispanic whites are still over 50 percent of the population in many states, one reason why you would see them in the elite level in swimming more than Afro-Americans and Latinos. In fact, when Jesse Vassallo won a medal in 1984 it wasn’t pointed out that he was Puerto Rician which is interesting. Swimming had top Asians and pacific islanders years ago in the US. The Duke K was a pacific islander who was not white either. Its ok to point these things out if one wants to that some Afro-Americans, Asians and Latinos have done well in swimming.

Afro-Americans are only 14 percent of the US population and of course do better in elite basketball and track and field. Non-Hispanic whites are still over 50 percent of the population in many states, one reason why you would see them in the elite level in swimming more than Afro-Americans and Latinos. In fact, when Jesse Vassallo won a medal in 1984 it wasn’t pointed out that he was Puerto Rician which is interesting. Swimming had top Asians and pacific islanders years ago in the US. The Duke K was a pacific islander who was not white either. Its ok to point these things out if one wants to that some Afro-Americans, Asians and Latinos have done well in swimming.

Can you articulate why you think we shouldn’t talk about race?

Because not all black people are American?

Because that would limit the story. There are Black swimmers that are not American

That is true. There are some us swimmers that have Asian ancestority like Nathan Adrian for example.

…why? Black people exist outside of America, you know. She’s the first person of African descent period to win a medal. African American is just narrowing it down to one country.

I think maybe because she is the first black woman from anywhere to when a gold. That is a much bigger deal.

Seriously its not a big deal. People need to stop getting offended when someone says “black instead of african american. Its not slang and its a perfectly acceptable term. No one complains when someone say “white” instead of caucasian. Personally I am asian and Ive never heard any of my asians friends insist on being referred to as “asian americans” just call us asian.

Manuel is a hero; both for the sport of swimming and her country.

Simone, we couldn’t be more proud of you, your swimming, and most of all your class.

Everything you said is accurate but let me add. This resonates so much with any black swimmer especially female. If we are being honest it’s human nature to look around, not see anyone that looks like you and feel uncomfortable. Ask a woman who walks into r

…repair shop full of men. Or a white male that walks into a black barbershop(I see you Phelps). Often times these can be uncomfortable situations. Simone accomplishment is going to make black kids feel like they belong in the sport. If you can’t understand that, I encourage you do find the nearest black person and have them explain it to you. Just please don’t be demanding. Listen, ask questions and then try to understand.