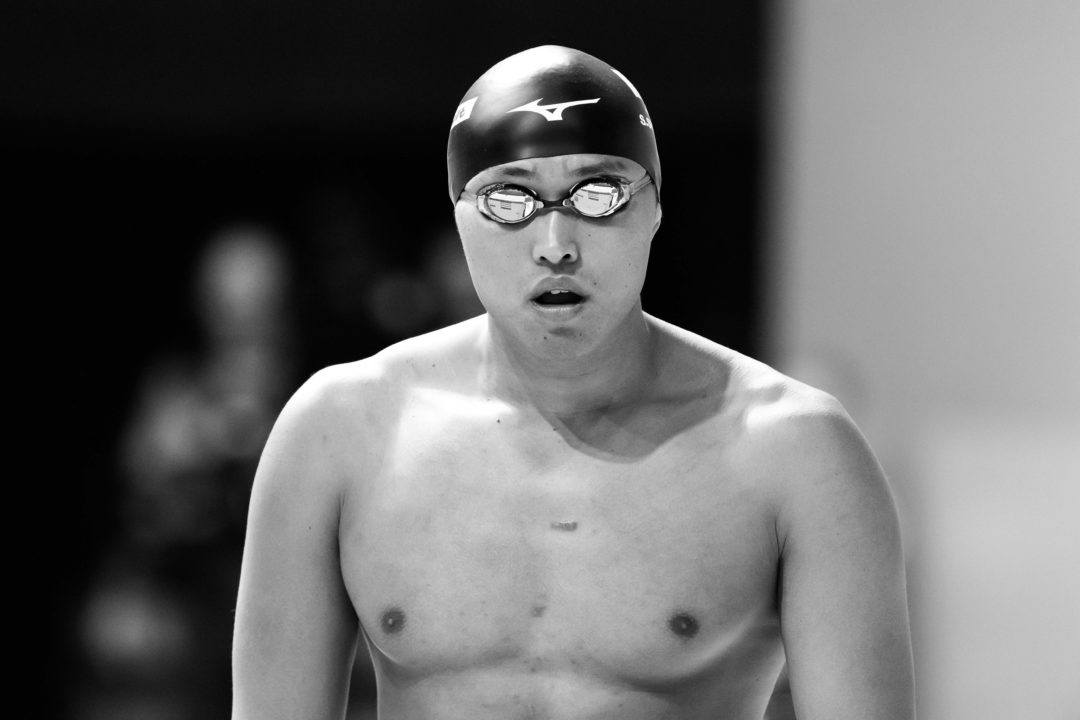 The 2019 Japan National Sports Festival wrapped up last night at the Ibaraki Swimming Arena with seasoned veteran Shinri Shioura taking away the men’s 50m freestyle title. Shioura told the press he took a break from the pool after becoming Japan’s first 50m freestyle World Championships finalist since 2001 but is now back to racing with eyes on Tokyo.

Matsui actually gave Shioura a run for his National Record-money during yesterday’s men’s 4x50m freestyle relay. Matsui led his Niigata squad off with a big-time split of 21.88 to check-in with a new 50m free personal best, but also a meet record. That sub-22 second mark is the first-ever by Matsui and it came within .21 of Shioura’s NR of 21.67 set just this past April.

The women’s 50m free last night was even closer, with the top 2 swimmers separated by just .01. Imai Tsuki put up the best time of her career with a gold medal-worthy result of 25.00. That sliced .03 off of the previous meet record and held off a charging Aya Sato who touched in 25.01. Chihiro Igarashi was finished in 25.34 for the bronze.

Tsuki is a close teammate to Rikako Ikee, the 2018 Asian Games MVP and 2016 Olympic finalist who is currently battling leukemia. She was among the Nihon University athletes for whom Ikee cheered at last weekend’s Student Swimming Championships.

World Junior Championships silver medalist Miyu Namba made an appearance on the final night of competition at Ibaraki, with the teen firing off a winning time of 4:09.23 in the 400m free. Namba represented the only swimmer of the final to delve under the 4:10 barrier and she was rewarded with a new meet record for her effort. Her time overtook the previous meet standard of 4:09.82.

Namba took silver in Budapest at this year’s World Juniors in the 800m free. She was a medal contender entering the 400m free race, holding a personal best of 4:08.37 headed into the meet. But, she managed just 4:15.77 to place 8th in the final there in Budapest.

The men’s and women’s 4x100m medley relays were the final events of the National Sports Festival and each ended the competition with a bang. The men’s team from Aichi got the job done in a collective time of 3:34.24, composed of the following splits: 54.74 from Takeshi Kawamoto, 58.77 from Yoshiki Yamanaka, 51.23 from Shinnosuke Ishikawa and 49.50 from Takaya Yasue.

As for the women’s edition, Team East Kyoto did major damage to the field, wrangling up gold in a new meet record time of 4:01.04. Miyuki Takemura led-off in 1:02.21, with Reona Aoki keeping up the speed with a breaststroke leg of 1:06.22. Suzuka Hasegawa logged 58.06, while Hiroko Makino finished off the medley with a solid 54.55 anchor.

Additional notable splits across the 2 races included a 48.58 free anchor from Juran Mizohata in the men’s, while Rio Shirai logged 59.63 on her squad’s opening backstroke leg. Tomomi Aoki registered the fastest women’s anchor in 54.29.

Now imagine how many of these winners won’t swim in Tokyo because they couldn’t hit the qualifying standards.