Seliskar To Swim 200s of IM, Free, and Breast at His Final NCAA Champs 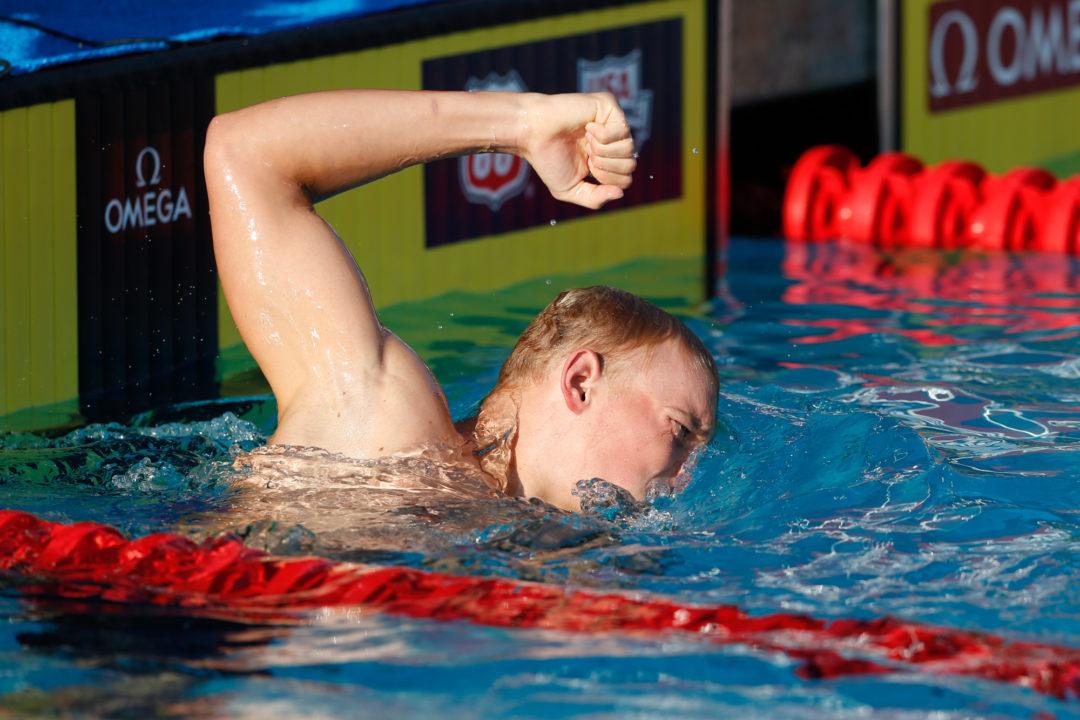 Cal senior Andrew Seliskar will once again switch up his NCAA lineup, this time dropping the 400 IM for the 200 free on Day 3. Current photo via Tim Binning/TheSwimPictures.com

Cal senior Andrew Seliskar will wrap up his NCAA career by swimming his third different event lineup, dropping the 400 IM while sticking with the 200 IM and the 200 breast.

On one hand this isn’t all that surprising. Seliskar has swum the 200 IM each of the past four years, and he was the runner-up in the 200 breast last year, after swimming the 200 fly his freshman and sophomore years.

Additionally, it was essentially a given that he’d swim the 200 free, since he hadn’t competed in the 400 IM at all this season. While he’s made the 400 IM A-final each of the past three years, the 200 free has been an increasing focus for him over the past year. He won the 200 free at last summer’s National Championships, then earned a silver medal in the event at Pan Pacs. After getting back into short course, he swam a 1:30.86 at the Georgia Fall Invite, a time that now ranks him at #4 all-time.

Granted, he’s not guaranteed a win in the 200 free, as he’ll be facing fellow senior Townley Haas of Texas. Not only did Haas earn the gold medal at Pan Pacs, but he’s the fastest man of all-time in the 200 free (SCY), and he’s the three-time defending champion.

Seliskar came out of high school already as one of the most versatile age group swimmers ever, and chances are he could score in just about every NCAA event. While he’s made the 200 IM A-final every year at NCAAs, he did pop a 4:13.02 in the 500 free at the Georgia Fall Invite, which puts him 11th in the NCAA this season. Impressive as that is, he does sit at the top of the 200 IM on the psych sheet, with a 1:40.53. Last year he posted the fastest time in prelims with a 1:40.40, before fading to 5th in finals with a 1:40.69.

He also has the fastest entry time in the 200 breast, with his 1:49.80 exactly half a second ahead of Ian Finnerty of Indiana. Last year, Finnerty won the 200 breast in 1:50.17, while Seliskar took 2nd in 1:50.42. Seliskar made the A-final of the 200 fly at each of his first two NCAA championships, but last year made the switch to breast, presumably due at least in part to Cal’s depth in the 200 fly. Even without Seliskar, the Bears still put three men into the A-final at the 2018 NCAA Championships.

Seli is going in, can’t wait for the March madness to begin

Don’t forget Andreas Vazaios who is the fastest returner and has been under 1:40.

Seli is only swimming the 2 free

Best chance seems to be that 200IM.

I honestly think thats his worst chance. His untapered 200 breast time this season is already faster than anyone’s best time. He was also right next to haas in the 200 last summer despite it not being an event he usually focuses on. I would bet he spent the last 6 months training 200 freestyle more than any other previous season. Personally, I expect him to sweep his individuals this year. He is on fire

You really think townley can lose a Yards 2 free?

I love how everyone keeps sleeping on Townley…just keep fueling that fire. Seli is going to be lucky to get within one second of him in the 200 Free. As great as he is, I don’t think Seli can crack 1:30, much less go a time to beat Townley, which is probably going to be 1:29 low. My money is on Haas breaking re-setting the 200 Free record, and making a serious run at the 500 record, if not setting that also. The only thing that can beat Townley in those two events is sickness.