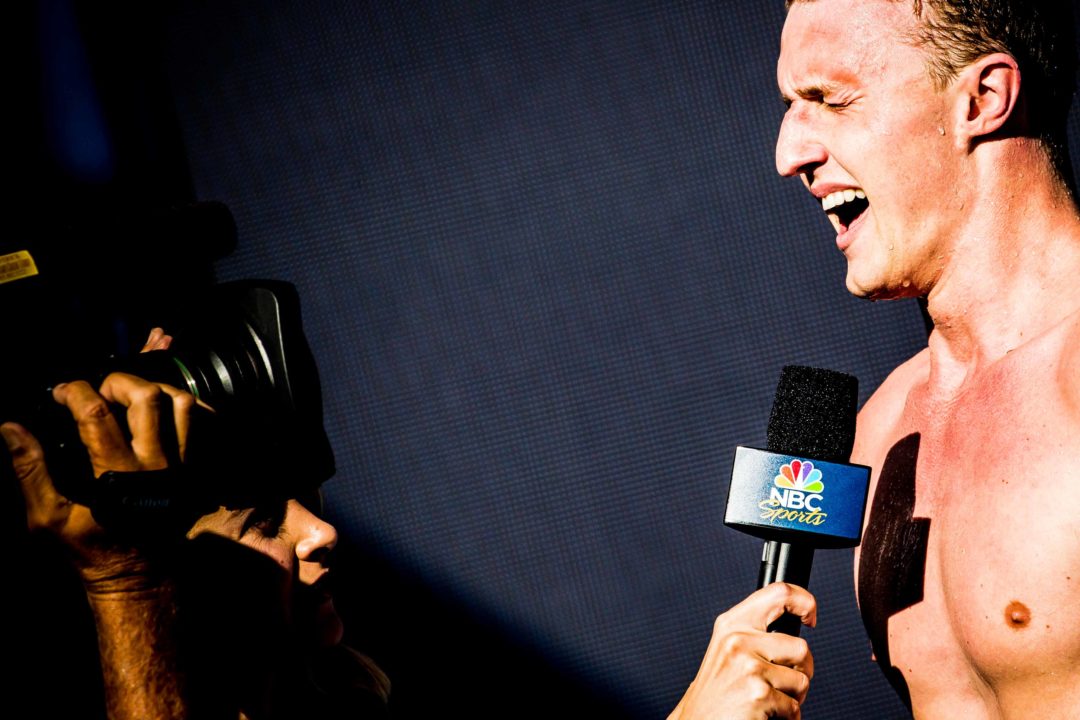 Elijah Winnington was the big winner of the visiting Aussie & British squads who raced at U.S. Nationals, with the Bond swimmer nabbing 2 golds. Archive photo via Jack Spitser/Spitser Photography

Strong contingents from both Australia and Great Britain wrapped up their racing campaigns at the 2019 U.S. National Championships in Stanford, California. We saw the likes of Elijah Winnington from down under do his thing at Avery Aquatics Center, while 3-time Olympian Hannah Miley produced some comeback sparks in her races representing Great Britain.

As the dust has settled from the 5-day competitive affair let’s see how the 2 visiting nations fared over the past week at U.S. nationals.

19-year-old Bond University star Winnington powered his way to 2 victories in the men’s individual events, taking the 200m free and 400m free against some very stacked stars n’ stripes talent. Winnington, who had a rocky Aussie World Trials that rendered him off the Gwangju squad, rocked a time of 3:47.39 to take the men’s 400m free, while also producing a time of 7:55.11 in the 800m free for 4th.

His big-time performance came in the men’s 200m free, where he notched a gold medal effort in a time of 1:46.19 to mark the 2nd fastest time of his young career.

Winnington was also a member of Australia’s gold medal-winning 4x200m free relay, opening in a split of 1:48.46, while producing a leg of 49.70 to help the Aussies win 4x100m free relay silver as well.

New South Wales Touring Team swimmer Abbey Webb finished 2nd in the C-Final of the women’s 100m free, hitting the wall in a time of 55.49. Edward Marks of Carlile made the men’s 100m fly C-Final, finishing 6th there in a time of 53.61.

A combined effort of Victoria/New South Wales finished with the bronze in both the women’s 4x100m free and 4x100m medley relays.

Bowen Gough and Matthew Temple were in the mix as well, both placing in an A-Final individually. Bowen clocked 1:56.65 to finish 5th in the 200m fly, while Temple produced a time of 52.11 to win bronze in the 100m fly.

Miley raced her way to 4th in the women’s 400m IM, but accomplished a big personal milestone by getting under the 4:40 threshold in a time of 4:39.00. The Aberdeen native underwent ankle surgery late last year, with this swim representing her fastest since last year’s Commonwealth Games. Miley also finished 6th in the 200m IM in a mark of 2:14.07.

Stirling’s Craig Benson got on the board with a silver medal in the men’s 100m breaststroke, producing a near-lifetime best of 59.79. He also finished in 5th place in the 200m breast in 2:11.27.

Lewis Burras won the B-Final of the men’s 100m free in a time of 48.58, becoming the 5th fastest British performer in history in the process. You can read more about his historic feat here.

They couldnt swim finals but heats are open.

Aussie boys Bowen Gough 200 Fly, Daniel Cave & Sam Williamson breastroke also made A Finals & the Aus Boys also dominated the relays winning Gold in the Medley relay in addition to their gold in the 200 free & silver in the 100
Free relays

Vote Up10Vote Down Reply
Aussie on the spot

And the girls Vicnsw team won gold in the 4 x 100 free relay.