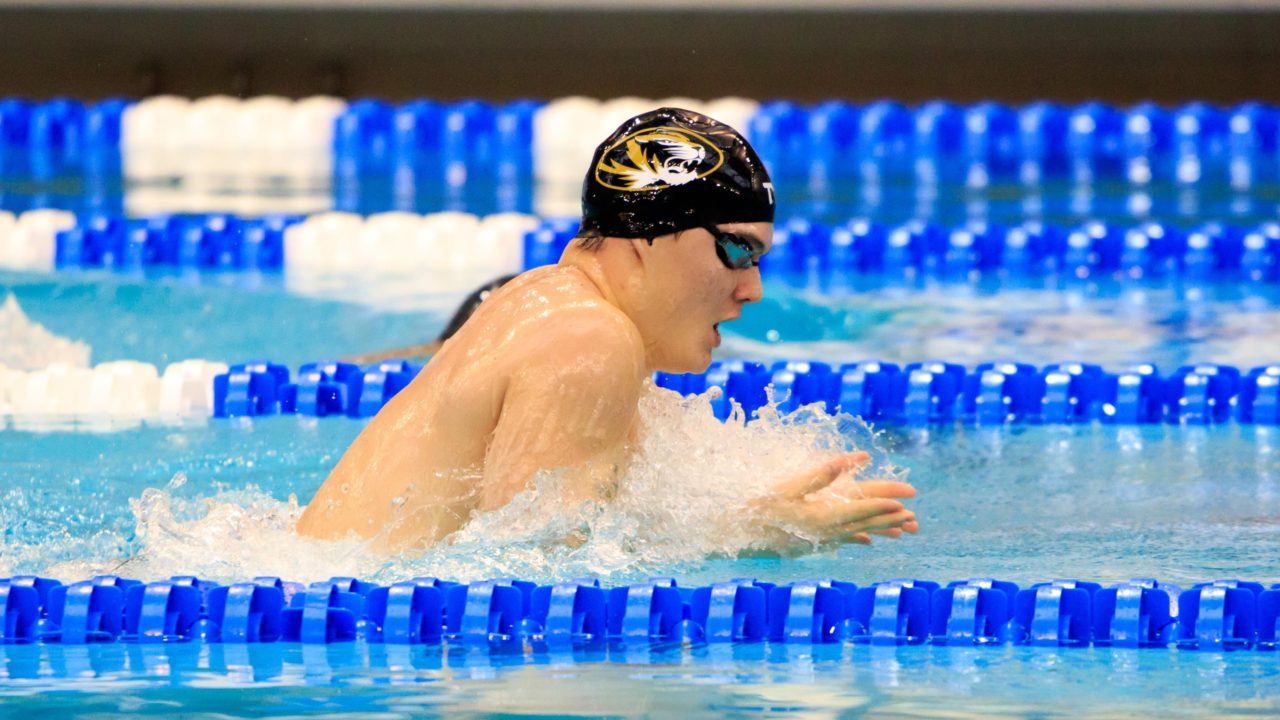 Now that all the major mid season invites are complete, pretty much every team in the country has had a... Current photo via Missouri Athletics, Justin Casterline

The next conference on the list: the SEC. From a team competition point of view last year’s SEC meets were pretty dull affairs (there were other sources of excitement to keep swim fans interested). Florida won the men’s meet by 243 points over Texas A&M for their 6th straight title. The Texas A&M women won their third straight title by nearly 300 over Georgia.

This year by contrast is set up to be an absolute barn burner for both the men and women. The Tennessee women, Missouri men, and Texas A&M men all have strong chances at their first ever SEC title. There are 5 men’s teams within striking distance of 1st right now. I don’t know which conference meet will be the fastest this year, but the SEC is definitely the most interesting. Both the men and women’s competitions have so much to unpack that I needed to split this article into two. The women’s analysis will be posted tomorrow.

There are 5 teams that could plausibly win this meet. In a ten team conference, that’s ridiculous parity. The 5 teams aren’t all equally likely to pull out the win, but none of them can be dismissed out of hand. The current Swimulator projection has Missouri 1st with 1162.5, Texas A&M 2nd with 1001.5, Florida 3rd with 994.5, Tennessee 4th with 908, and Georgia 5th with 904. Let’s walk through the arguments for and against each team.

The pro Missouri argument is simple. They have a 161 point lead on the next best team right now, and that lead would be bigger if they had a time in the 800 free relay. Their lack of a time there means they are projected to score 0 points by Swimulator costing them likely about 50 projected points. This gives them a virtual lead of around 210 points. Missouri are a deep, veteran team. Their lowest scoring individual event, the 1650, still has them projected to 47 points. 685.5 of their 934.5 projected points come from juniors and seniors.

Now for the cons, and they are some significant cons. Missouri were projected to score 919 points in the mid season projection last year and they ended up scoring only 713 swimming points at SEC’s. A repeat points drop off of 200 points will almost certainly see them passed for the title. Missouri were faster at their mid season invite this year than last year – a sign that another SEC dropoff may be in the cards.

Missouri also only return 55.5 diving points which is more than Florida, but more than 80 fewer than Texas A&M and Tennessee. Also, there has been some chaos with their coaching situation which usually isn’t helpful.

In the past Missouri has rested mid season and mostly swum through SEC’s to focus on nationals. That’s partly why we saw such a dramatic points drop off last year. However the incentives are different this year. There isn’t an unbeatable Florida team sitting in the top spot. Missouri have a shot at their first ever SEC title. Chasing that championship might be more appealing than getting 12th at nationals instead of 17th. We’ll have to wait and see what they decide to do.

A&M sit in second with 1001.5 points. Unlike Missouri they didn’t drop off their mid season projected total at SEC’s last year. At mid season they were projected to score 780.5 swimming points and they scored 774 swimming points. A&M also return 137 diving points, 81.5 more than Missouri. If Missouri fall off a cliff again, all Texas A&M might have to do is hold serve in the pool, and the title could be theirs. Even a small drop off from Missouri and a good meet from the Aggies could get it done because of their diving advantage.

Florida, Georgia, and Tennessee are lurking, but A&M’s diving points should give them some cushion against possible charges from those teams. A&M are led by their solid freshman class (279 projected points) and a couple of top seeded relays. Given Missouri’s history, A&M have at least an equal chance of winning the meet. As with Missouri, a win would be a first ever SEC title for the Aggie men.

Florida are an interesting team this year. In the current projection of swimming points they sit only 7 points behind Texas A&M in 3rd. Last year they improved 157.5 points over their mid season projection at SECs, but last year they were coached by Greg Troy. It’s hard to say if that is going to happen again under the Anthony Nesty. From the outside it’s hard to guess how much their training cycle has changed. Florida were a bit faster at their mid season meet than last year, but not a crazy amount. A big points jump still seems plausible. If they explode like last year, Florida are right back in the mix. They lost last an incredible 443 individual points to graduation, but their awesome freshman class (projected 293.5 points, top in the SEC right now) have helped to plug that hole a bit.

Florida only return 9 diving points, so the swimmers will have to do everything again if the Gators want to make it 7 in a row. Without Caeleb Dressel, Mark Szaranek, and Jan Switkowski, Florida are unlikely to make it to 1200 points again this year, but it probably won’t take that many to win. 1100 might do it, and that number looks achievable for this team. Florida were on the edges of the national title conversation last year. They aren’t this year, but something they can do is defend their SEC title. A win would be a statement. “Dressel might be gone, but we’re still here.”

There’s a lot going on with this team. In the current Swimulator projection they are 4th, 86.5 points behind Florida and 4 ahead of Georgia, but if we account for returning diving points (Tennessee have 135), Tennessee rank 3rd. Like Missouri, last year Tennessee had a large drop off from their mid season projection at SEC’s (mid season 939.5->SEC’s 704.5).

Tennessee have the most returning individual points from last season with 520, but their freshman class is only projected to score 42.5 points. That total might be boosted by the possible January arrival of Michael Houlie, a junior worlds finalist for South Africa.

Tennessee are good in the right places. Their second highest projected scoring event is the 50 free which gives them solid relays (compared to Georgia who’s three worst events are the 50 free 5 points, 200 free 13 points, and 100 free 15 points).

For Tennessee, this is their year. Now or never. They have 644 projected individual swimming points. 577 of those come from juniors and seniors. Their superstar diver, Colin Zeng, is a senior. The winning point total at the SEC championships might be lower than it has been in a long time. If Tennessee are ever going to win their first title since 1996, this is it. Like Missouri, Tennessee’s incentives for this meet are different than in past years when the SEC title wasn’t within reach. They might be able to avoid the large drop off by focusing more on this meet.

Georgia might not be the national power they’ve been in the past, but they’re still real deep (13 swimmers projected to score 25 or more points). They are currently 5th with 904 projected points. Accounting for returning diving points (they return 64), Georgia are only 28 points behind Florida. Georgia were projected to 903 points at mid season last year and ended up falling off a little to 879.5. However, unlike Georgia teams in the recent past, they don’t have the luxury of looking past this meet to nationals. Georgia only have 4 swimmers with times that would’ve been invited to last year’s national championships and they have 0 relay cuts. If Georgia even want to go to nationals, they need to go fast at SEC’s. This would obviously help their scoring prospects at SEC’s.

Of the top 5, Georgia and Tennessee have probably the two toughest paths to the title, but the path does exist for both of them.

Swimulator points do not include diving

Is it me, or is the use of the plural pronoun throughout this article a bit ….. off?

Vote Up100Vote Down Reply
JP input is too short

Author might be British? I think they refer to teams as a plural as opposed to singular.

The SEC is really weak this year…sad. BUT a great opportunity for TENNESSEE!!! With the diving points they could actually pull it off!!!

there could be 4-5 new guys coming aboard in January

who and for which teams

Vote Up10Vote Down Reply
Someone

Will Greg Rhodenbaugh be back soon? Anyone hear anything on his status? Will this make a difference?