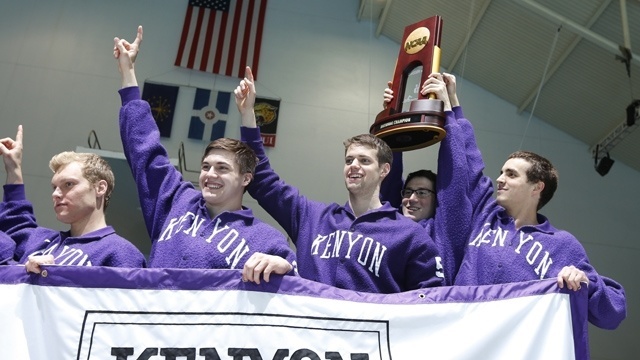 The Bears were hot off the blocks, winning five of the first six races, propelling UNC to a big lead early and they never looked back.

With Allen Weik – Denison ’14 – the NCAA 500 record holder, having graduated, this year’s 500 freestyle is up for grabs – and so are many other titles. This article has you covered for everything going into men’s NCAA Division III championships, which will be held from March 18th-21st in Shenandoah, Texas, just outside of Houston.

Using the top-16 from the psych sheet in order to prescore the events, here are the (predicted) team totals for the 2015 NCAA D-III Championships:

Williams senior Thad Ricotta – who finished 11th overall in the event last year – swam a quick 4:25.93 at NESCACs this past weekend – a swim which earn him the first place seed. Hopkins sophomore Andrew Greenhalgh, however, took fourth in the 500 last year and is going into NCAAs right behind Ricotta – seeded with a 4:26.08. Additionally, sophomore Arthur Conover – of Kenyon College – placed third last year and is seeded just hundredths of a second behind Greenhalgh with a 4:26.11. With big names like no. 7 Williams, no. 1 Kenyon, no. 3 Emory, no. 2 Denison, no. 6 Hopkins, and no. 12 Keene State all having swimmers seeded in the top eight, this race could be anyone’s.

The amount of time the top two athletes in this event have dropped over the course of the season since last year’s NCAAs is astounding. Conover is nearly ten seconds faster than he was at NCAAs in 2014, and sits only five seconds away from the national record established by Al Weik in 2012. Greenhalgh is also considerably faster than he was ranked last year going into NCAAs. Last year he dropped 12 seconds from his seed time. If he duplicates that feat this year, the mile is going to be an explosive race! Resman was fifth in the mile last year, behind a few graduated seniors. He is also already two seconds faster than where he was at the NCAA meet last year, and ten seconds ahead of where he had been coming into the meet in 2014.

For the men’s 200 IM Emory junior Andrew Wilson – who finished fifth last year – is already seeded in first with a time of 1:47.59 – a time that would’ve placed him in a close second behind three time NCAA champion Jeff Depew. Coming into the NCAA meet, Depew is about a second faster than where he was last year when he won the event. Anderson of Mary Washington will also be up there in the mix. Last year he came into the meet seeded four seconds slower than he is this year and proceeded to whip his way through to a silver. With the tightness of this event this year, it’s one worth keeping an eye on.

Wilson is also a shoo-in for the 100 breast – as he is seeded first by over a second. Last year he was under the meet record, but so was Michael Lagieski – a then-freshman from Wash. U. – who touched the wall just before Wilson. Lagieski is seeded seventh heading into NCAAs in the 100 breast.

It might be a while before Zach Turk’s (Kenyon ’12) 50 free record (19.38) falls – yet Jason Potter – a senior from Gettysburg is going to give it a shot. Potter finished third over all in the 50 free last year with a 20.32 – yet is already seeded first in the event with a 20.10. Jerimiah Crowley – a senior from NYU – didn’t even make the C final at last year’s NCAAs – finishing 35th overall with a 20.85. Crowley, however, had an amazing senior season and is seeded just behind Potter with a 20.13. If Crowley can shave another :00.72 off of his 50 time at prelims, Turk’s record might fall. Only .26 seconds separate the first Potter from the eighth seed Austin Caldwell (Kenyon ’15) – this could be anyone’s race.

For the 200 Medley Relay, Emory’s nearly-record-breaking team last year was made up of three seniors – the only veteran from that relay is IMer Andrew Wilson  – who split a 24.68 on the breaststroke leg. No. 3 Emory is seeded seventh in the event, while no. 7 Williams, no. 2 Denison, and no. 5 TCNJ hold the first, second, and third spots, respectively. Last year Williams finished seventh overall – but with junior Jake Tamposi just breaking the NESCAC breaststroke record, Williams is the favorite.

Last year, as a junior, Mary Washington’s Hugh Anderson broke his own 400 IM record by over a second – lowering it to 3:49.25. Anderson goes into NCAAs seeded first – yet Kenyon sophomore Trevor Manz – who finished third overall last year is close behind in second. Third seed goes to Denison sophomore Jack Lindell – who finished ninth at finals last year yet is seeded with a 3:52.81. While Anderson is a shoo-in for first place, second, third, and fourth are completely up for grabs.

Last year the 100 fly came down to one-one hundredth of a second – with then-junior Karl Mering (47.91) taking the title over then-senior Sam Gill (47.91). Mering – now a senior for Whitman College – is seeded tenth overall with a :48.73. First seed goes to Rose-Hulman junior Orion Martin – who finished seventh in finals last year. Martin claims first with a quick 47.92 yet is only in first by a small fraction of a second – to Wash. U. junior Reed Dalton – fourth place finisher in 2014.

For the 200 free, Austin Caldwell, a Kenyon senior, might be unrivaled this year. Caldwell narrowly placed first in 2014 – with second, third, fourth, and fifth all going to seniors who have since, graduated. Caldwell heads into the 2-free seeded with a 1:36.91 – closer to the record than anyone has been for a while. Seeded in second and third, are Whitman senior Karl Mering and Hopkins sophomore Evan Holder, respectively. Mering may be swimming at a disadvantage having just come off a 100 butterfly minutes before going into the finals of the 200 freestyle.

Last year Emory was just four-hundredths off of the NCAA 400 medley relay record – yet lost their backstroke and freestyle legs to graduation. Emory takes fourth place seed this year, followed by first seed Kenyon, Denison, and Williams, respectively. Although Williams’ 400 medley DQed in the finals last year, all of the members of the relay will be back swimming at NCAAs again this year.

Speaking of Williams, senior Thad Ricotta also is seeded first in the 200 fly – but by only :00.03 seconds – to 400 IM record holder Hugh Anderson. Both Ricotta and Anderson are seeded over a second from the third place seed and will most likely take first and second. Anderson won last year with a 1:45.36.

2014 fourth-place finisher Benjamin Lin – a sophomore from Williams – is set to take the 100 back title. That being said, Harrison Curley – a senior from Kenyon – finished seventh in finals last year and is seeded just behind Lin at second.

With Kenyon seeded first in the 800 free relay by nearly seven seconds, last year’s champions, Johns Hopkins, will have a lot of ground to make up if they want to jump from their third seeded spot to take first place. Number two is currently claimed by Denison.

Last year in the 2-back, Harrison Curley and Kevin Lindgren, of Kenyon and the Marines, respectively, battled it out: going into finals just five-hundredth apart then finishing first and second with less than a third of a second between them. This year, both Curley and Lindgren are seeded in first and second, respectively, both of them being the only men seeded under 1:46.00.

In the 2-breast, Andrew Wilson also claims the first place spot with 1:57.18. Wilson is almost three seconds ahead of the number two seed, Kyle Walthall and will likely beat last year’s champion, Steven Van Deventer, who is seeded fifth.

The last event – the 400 free relay – went to TCNJ in 2014, but with half their relay having graduated, TCNJ comes into this even seeded third. Kenyon, however, is seeded first by nearly three seconds – to rival Denison – the second seed. With six schools already having broken the 3:00.00 mark, this race is going to be a quick – and exciting – one.

Check back here in March for more Division-III NCAA info!

It’s hard to pre-score diving, but teams like Denison and Chicago will probably bring several divers. As we all know, it was Denison’s strength on the boards that allowed them to break the famous Kenyon Championship streak. Chicago was as close to Emory this year at UAA’s because of a boatload of points off the boards. Assuming an 8th and 9th place finish (one “up” and one “down”) for diving for either Denison or Chicago or anyone else bringing divers, and that’s a potential 40 pt push, enough to push Chicago 10th to 6th on paper.

Last year, who ever predicted the D3 nats winners failed to pick Jeff Depew after he was a two time defending champ in the 200 IM. This year, he isn’t even in the top three after being a three-peat champ? Come on.

Jeff Depew should be in the mix for all three of his races. I heard he was doing doubles up to the day of his conference meet. Talk about gutsy!

A lot of swimmers do doubles up until or through their conference meets. Especially if they already have cuts. I don’t doubt Depew will do great but this is hardly a valid point in his favor.

Jeepers… those “purple fuzzies” are still around… Kenyon Swimming is a great institution, but those things are possibly more impressive in their resilience!