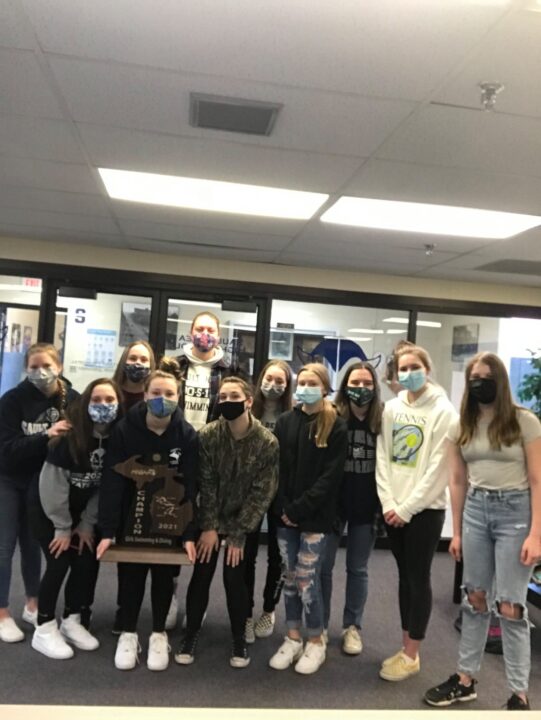 All eyes will be on Simone Manuel tonight as the four-time Olympic medalist has her last chance to get on the U.S. Olympic team.

Caeleb Dressel Ties His Own American Record with 21.04 50 Free

The win gives Dressel his 3rd individual event for Tokyo, and puts him in line for a 7-event schedule in Tokyo when relays are included.

Follow along here as Rebecca Smith, Kelsey Wog, Jeremy Bagshaw, and Gabe Mastromatteo, and many more try to punch their ticket to Tokyo.

Marquette would take the lead in the meet as they placed three swimmers in the top four of the 200 freestyle. Senior Lexi LaCombe of Marquette was behind at the 150 mark by over a second. She used a 31.85 last 50 to surge ahead to win in 2:04.97. This was LaCombe’s second individual state title of her career as she previously won the 100 backstroke in 2018.

Marquette had the advantage in diving as they placed first and third in the event. Senior Haddie Ketzenberger would end her career with a state title with a score of 186.00.

Freshman Adelaide McRoberts of Kingsford High School made an impact in her first state meet. Her first individual swim resulted not only in a state title but a state record as well. Her time of 58.89 in the 100 butterfly erased the mark of 59.27 that Roberston set as a freshman. She would win her second state title of her young career as she captured the 100 backstroke in 59.68.

Another freshman that made an impact on the meet was Grace Sobczak of Marquette. She won the 500 freestyle in 5:31.13 and led a 1-2 finish for Marquette to stay in the title hunt.

Marquette would begin their trek to the state title with a dominant victory in the opening event from a quartet of sophomores. Andrew King (29.12), Colin Vanderschaaf (28.14), Liam McFarren (25.56), and Maverick Baldwin (22.67) would combine to win the 200 medley relay by over five seconds with a time of 1:45.49.

McFarren and Vanderschaaf led Marquette as each won two individual titles. McFarren’s first title came in the 200 freestyle as he swam to a six second victory in 1:54.84. McFarren led a 1-2-3 finish for Marquette in the 100 butterfly as he won in 59.84 for his second title of the meet and third of his career as he won the 100 freestyle last year.

Senior Morgan Burd of Sault Area was another double-event winner. His first win came in the 50 freestyle as he outswam the field to win by .20 seconds in 22.68. Burd would win the 100 backstroke for the second year in a row. His time of 55.55 won the event by over eight seconds and was just off his winning time of 55.33 from last year. Burd finishes his career with four individual titles.