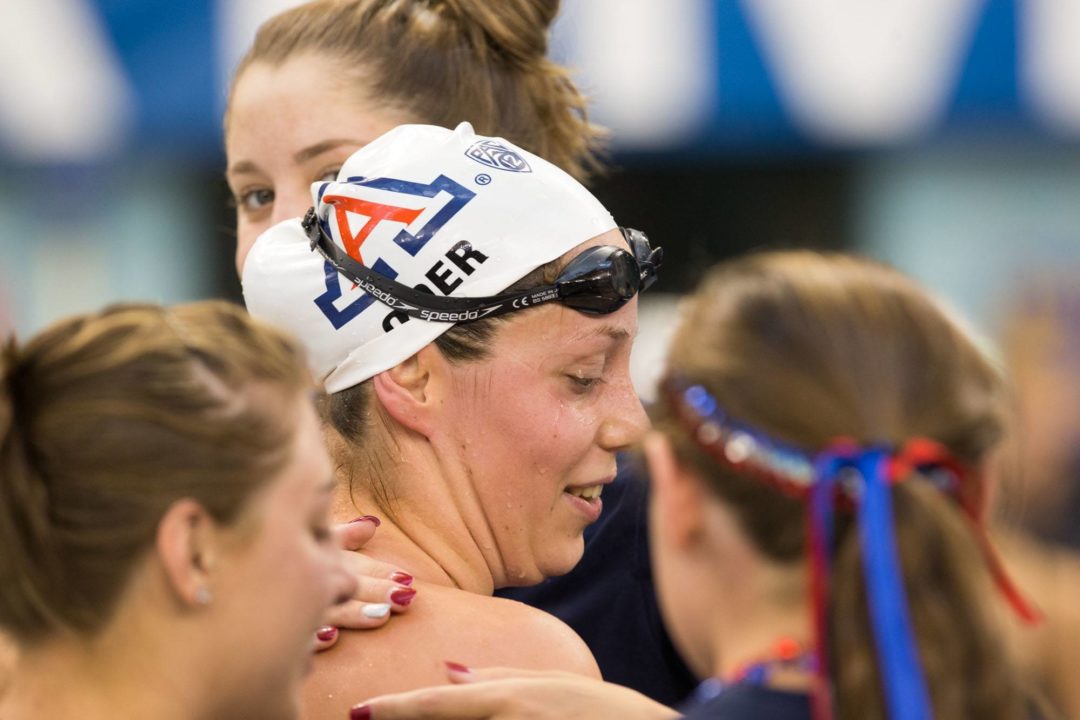 Arizona All-American miler Tjasa Oder (above) will have a new group Archive photo via Tim Binning/TheSwimPictures.com

Steve Brown, the head coach of the Sarasota YMCA Sharks in Sarasota, Florida has been picked as the new assistant coach of the Arizona Wildcats, according to several sources close to both sides. Though neither Arizona or Brown were able to confirm the decision late Thursday evening, but Brown did confirm to the local Herald-Tribune paper in an article released Thursday.

Brown has developed his Sarasota Y program into one of the top junior distance programs in the entire country, becoming a breeding-ground for NCAA Division I talent of all types, and especially in the distance racesThis, however, will be his first foray into college coaching (that we’re aware of).

Among his accolades as the coach at the Sarasota YMCA includes being named to the coaching staff at the 2012 Jr. Pan Pac Championships in Hawaii. He joined the Sarasota YMCA staff in August of 1994, just after graduating from Ball State, and has been with the program ever since. As part of that work, he was named Florida’s Age Group Coach of the Year in 1998.

The list of swimmers that he’s coached to a high level could go on for a long time, but among the highlights include Nicholas Caldwell, a National Age Group Record holder who committed to Florida and has since transferred to Wisconsin with a revived success; Florida Gators Ashlee Linn, Taylor Katz, and Corinne Showalter; Florida State standout McKayla Lightbourn; Texas commit and Junior National Team breaststroker Bethany Leap; and Junior World Championship team member and Michigan commit Alex Katz.

This Arizona coaching vacancy is one that has been flying a bit under the radar because they haven’t actually lost an assistant. Rather, Rick DeMont was promoted to head coach earlier this year after the mid-season resignation of Eric Hansen, having spent a long time as the program’s Associate Head Coach. The hiring of Brown should be an excellent complement to DeMont’s work – while DeMont was a distance swimmer as an athlete, he’s built his reputation as a coach by working with sprinters and stroke swimmers. Brown’s ability to churn out a high density of distance talent in Florida should prove useful to Arizona.

In all, the Arizona staff, with Adam Byars, Brandy Collins, grad assistant Jesse Stipek, and volunteer assistant Matt Grevers, along with Brown and DeMont, is a very well-rounded group. Strikingly so, in fact, from a number of different angles: from their level of personal success as athletes, to their coaching histories, the types of athletes and specialties they’ve had success with, and even with their regional connections, this is a very complete staff that should provide some stability for the team headed into next season.

What a great guy! Congratulations on stepping to the next level! He has been terrific to our family swimmers every holiday we swam in Sarasota over Christmas break, and even with such a short time he gave guidance and encouragement to guest swimmers! Good job Steve!

So excited and proud of you Coach Brown! Best wishes :)!

Congrats go out to my old college teammate Steve and the Arizona program. Sarasota will surely miss him and I will miss seeing him on deck here in Florida. However, I know he will continue to be a force in swimming and for his swimmers. Best of Luck Buddy!

Perhaps a safer swimmer environment will be left behind. I left because of the sexual culture and the eventual banning of Brown’s brother-in-law from USA Swimming (Mark Matuszak, see http://www.usaswimming.org/ViewMiscArticle.aspx?TabId=1963&Alias=Rainbow&Lang=en&mid=10011&ItemId=5107). Last weekend at a swim meet in Sarasota, a swimmer suffered a concussion and another a perforated ear drum.

Ex Shark – glad you are just that. Coward’s way of spoiling a great accomplishment. Steve has done a terrific job as head coach of the Sharks and leaves the team in great shape and form. Good luck Steve!

BTW where are you an official?

Many people here refuse to use their real names on this site, but I actually stand behind what I say. I’m glad you are no longer with the program; based on your comments you clearly didn’t understand the core principles the YMCA stands for. Just a tip from a proud Shark alum and Harvard grad; attacking someone’s character and leadership while spreading rumors won’t get you anywhere.
Steve Brown is one of my biggest role models. I’ve been blessed to develop personal relationships with a lot of exceptional people but Coach Brown stands out as one of the best. His mentorship on and off of the pool deck has made me who I am today. I have no doubt… Read more »

Steve is a great guy and coach! Hate to see him leave Sarasota as he has done such a great job there, but I wish him the very best.