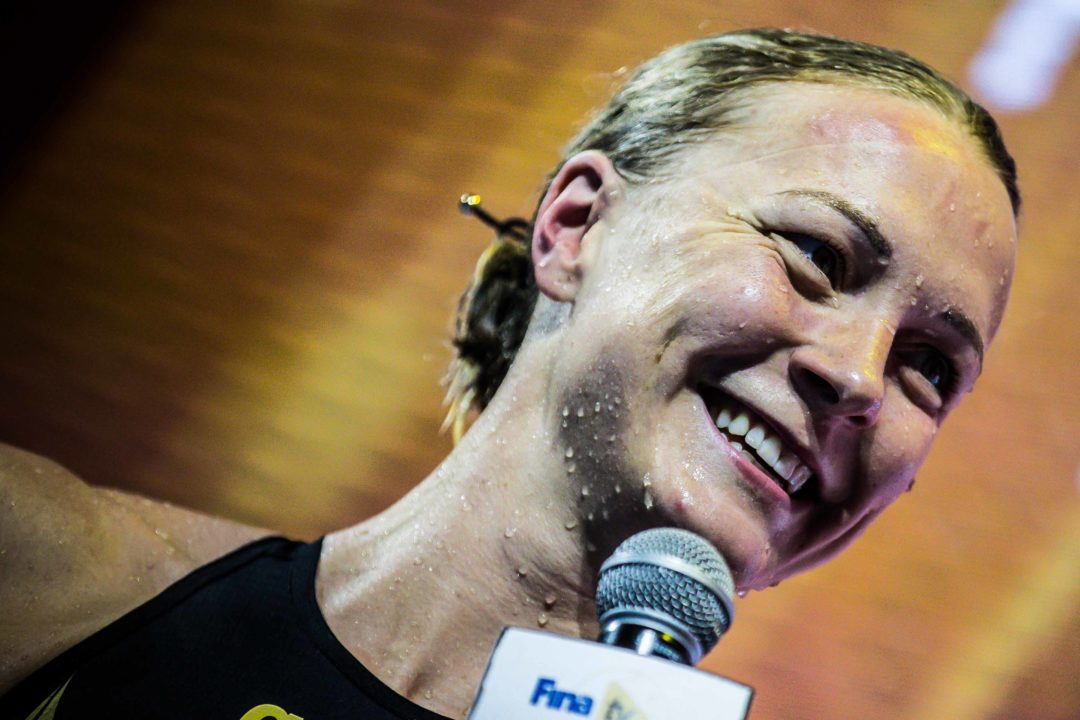 The amount is smaller than the $314,4000 that Sjostrom earned at the FINA World Cup Series, but was also earned in 15 fewer days (21 vs. 6) of racing. Current photo via Jack Spitser/Spitser Photography

The 100 Freestyle is Too Long for Bruno Fratus (Video)

Although he barely broke 50 in the 100m free in Indianapolis, it was a good sign for the Worlds medalist who’s still recovering from a recent surgery

Even without swimming any relay events in Indianapolis, Sweden’s Sarah Sjostrom came away with the money-winning top prize, just inching out Michael Andrew, who needed anything-but-4th in the final relay, the mixed medley, to surpass the Swede.

Sjostrom’s $44,000 on 5 individual swims this weekend capped off a whopping $148,000 series for Sjostrom. In total, she won 12 individual events across 3 stops and was runner-up on 2 other occasions.

Hungary’s Katinka Hosszu finished 2nd with $123,000, though it took her more swims (15 individually) to get there. Michael Andrew was 3rd with $103,500 on 14 swims, as the trio clearly separated themselves from the pack in the overall earnings. Saturday also gave Andrew his first individual win of the meet, a gold in the 100 fly.

In her first appearance of the season, breaststroker Lilly King came away with the most gold medals, 4, of any swimmer, including the punctuating 100 breaststroke and 400 medley relay titles on Saturday. That was good for $34,500 in her biggest prize-money payday so far as a pro.

For sake of comparing, the top earner at the 2018 FINA World Cup Series was Vlad Morozov, who captured $332,000, albeit across a 7 meet series. That comes out to just over $47,000 per stop, which is fairly close to the $49,000+ that Sjostrom made per-meet at the Champions Series.

The biggest difference in prize money distribution came in the secondary tier of athletes. For example, only 19 swimmers (10 men, 9 women) earned more than $10,000 at the FINA World Cup Series. Even with just 3 meets, 83 swimmers earned at least $10,000. That is where, like the ISL intends to do, this series has helped close the gap – swimmers like Vlad Morozov, Sarah Sjostrom, and Katinka Hosszu are going to ‘get theirs’ no matter the format. For swimmers like Arno Kamminga and Gabriele Detti and Imogen Clark and Hali Flickinger, that amount of money, with a relatively-small commitment to competition, can make the difference in being better-able to support their Olympic dreams deep into their 20s and 30s.

The Americans came away with the biggest prize haul in the series, earning $621,000 as a group, followed by the Russians ($313,000) and the Chinese ($303,000), the latter of whom did most of their damage in the home meet in Guangzhao. Hungary earned $204,000 thanks to a lot of “fill in” opportunities at the Budapest-hosted meet, while Sjostrom by herself ranked 5th among national money overall in the series.

Did Sarah and Katinka say “no relays for me please”?

It will be taxed the way that anybody else’s income would be taxed, based on where it was earned. There was a great article about this topic in an old issue of SwimSwam Magazine if you want to read more. But, for example, only the money he earned at the Indianapolis stop will be hit by the Indiana Income tax rate, which last year fell at 3.23%.

He can deduct expenses and anything else as applicable by law, just like anybody else.

All the prize money goes through USA swimming, they take the tax out and rest goes to Michael! All above board