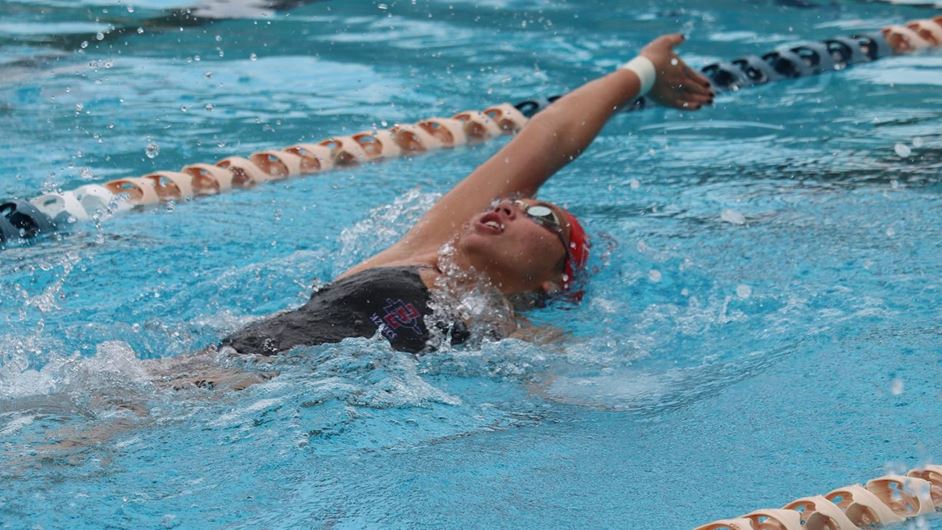 The San Diego State women jumped out to an insurmountable 66-11 lead after four events and went on to an 81-65 victory over the Pepperdine Waves. Current photo via San Diego State Athletics

MALIBU, Calif. – The San Diego State swimming and diving team jumped out to an insurmountable 66-11 lead after four events and went on to an 81-65 victory over the Pepperdine Waves at the Raleigh Runnels Memorial Pool on Thursday.

The victory is the program’s 29th straight dual meet win and improves the Aztecs’ record in duals this season to 2-0. San Diego State has not lost a dual meet since Jan. 8, 2018, and, since the 2016-17 season, the Aztecs have defeated the Waves 11 straight times, including six straight in Malibu.

In the opening event, the 200-medley relay, the Aztecs recorded four of the top five times, but only counted its first and second place finishes. The team of Mia McKenna, Klara Thormalm, Kristina Murphy and Lizzie Menzmer earned the victory in a time of 1:45.35, with Alex Roberts, Jessie McMurray, Riley Tapley and Meredith Smithbaker coming in second in 1:47.09. Lexi Anderson, Ashlyn Hemphill, Fiona Trotz-Chavez and Cassandra Phillips had the third fastest time, 1:49.02, but they, along with Lauren Torchiana, Brynlee Busskohl, Paige Mitchell and Ryan Dulaney who compiled the fifth fastest time, 1:51.19, did not figure into the scoring after their races were exhibitioned.

In the 50 back, San Diego State swept the first three spots with Evonne Stehr winning in 26.50 seconds. Tapley and Anderson were second and third, respectively, in times of 26.80 and 28.01.

In the final swimming event, the 200 free relay, San Diego State again had four of the top-5 times. The team of Geyer, Menzmer, Murphy and Cooper finished in the quickest time (1:36.40). Phillips, Thormalm, Dulaney and Gebhardt touched second in 1:37.72, while Smithbaker, Johansson, Trotz-Chavez and Stehr were the third fastest at 1:39.63. Mitchell, Anderson, McKenna and Torchiana finished in 1:43.73, the fifth team to touch the wall.

Six Aztecs competed on 1-meter board, the lone event diving event of the day, and San Diego State took the top three spots led by Summer Westmoreland (248.04 points). Lexi Letts was second with a score of 237.90, and Olivia Zamudio finished in third with a score of 233.94.  San Diego State’s other three divers were Juliana Harrison, who recorded a personal best of 215.34, Gilliam Garcia had a total of 191.86 and Emma Duggan finished at 158.77. Harrison, Garcia and Duggan dove as an exhibition.

NEXT UP
The Aztecs will spend the next two days, Friday and Saturday, in Fresno, Calif., competing in the Chick-Fil-A Invitational. The first swim on Friday, the 200-medley relay, is scheduled to start at 11 a.m. Other team competing in the event are UCLA, California, Washington State, and San Jose State as well as the host Fresno State.

MALIBU, California – The Pepperdine swimming and diving team completed its first competition of the 2021-22 season, falling to San Diego State by a score of 81-65 in the dual meet.

In the diving portion of the event, Lexie Martin (Keller, Texas/Keller HS) was the top performer for the Waves. The freshman finished with a total score of 220.14 and came in fourth.

NEXT UP: Pepperdine has a short turnaround, as the Waves host the Rodionoff Invitational Friday and Saturday at Raleigh Runnels Memorial Pool. Diving starts at 10:00 a.m. on both days, while the swim portion of the meet commences at 5:00 p.m. on Friday and 11:00 a.m. on Saturday.