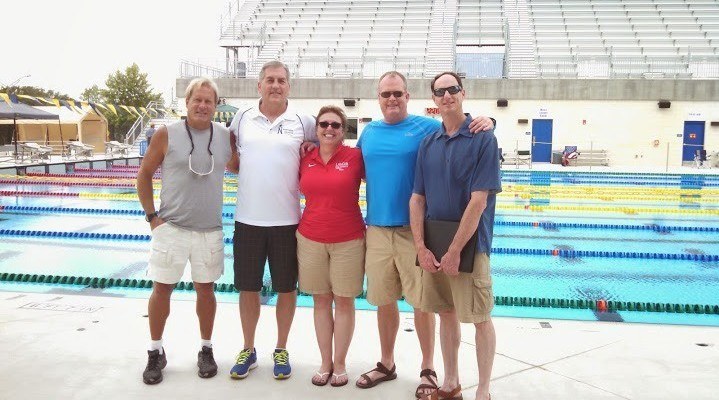 Deaf Swimming officials pose for a photo at the Northside Aquatic Center in San Antonio, which will host the 2015 World Deaf Swimming Championships

In the wake of Russia’s invasion of Ukraine, Ukrainian athletes have largely fled to other countries in Europe which have opened their arms to accept them.

The USA Deaf Swimming organization today announced that San Antonio Texas has been selected to host its top international meet – the 2015 World Deaf Swimming Championships slated for August 17–22, 2015. The San Antonio Northside Independent School District’s Northside Swim Center will host the competition and is truly set to become the focal point of American and International swimming in 2015.

The event is considered the key venue for American and International Deaf swimmers competing to attend the 2016 Rio de Janeiro Olympic Games and other International Committee of Sports for the Deaf (ICSD) competitions around the world.

‘We look forward to having Team USA athletes compete in both the USAS and USADS competitions’ says Ben Hobbins, USADS Head Coach. ‘I expect great things again in both competitions from Marcus Titus (28) and Matt Klotz (18) and our other swimmers’. USADS swimmers have been placing consistantly in finals A, B and C in Arena Grand Prix meets this year. ‘I expect great things ahead.’

For San Antonio, USADS is planning a series of unique Make-A-Splash events in partnership with the US Swimming Foundation with the Deaf Team USA teaching about pool safety and swimming. Just last January 18 2014, Team USA organized a MAS event at the World Swimming Championships in Rochester NY, the very first of its kind with the entire Team USA and a Team Great Britain athlete – teaching 800 youth and adults about pool safety and swimming. In May, USADS partnered its Ambassadors at USSF’s Phillips 66 Make-A-Splash Tour at the Belmont Olympic Training Ctr in Long Beach with US Olympians.

‘The MAS Rochester NY event was ‘watershed’ for our USADS Team USA and USSF’, says Team USA athlete Ashley-Anne Hobbins who worked with USSF to organize the event. ‘We have so many things to develop in partnership, so much goodwill for our organizations’. All Team USA swimmers are ‘USADS Ambassadors’ for swimming. ‘Rowdy and Judy (Gaines) are big supporters, a family friend. Did you know his daughter ‘signs’?’ adds Ashley-Anne. San Antonio’s own Abby McAlpin is a USADS Ambassador!

In Water, We are ALL Deaf.

USADS intends to partner with USAS at the national and state-by-state levels for identifying and welcoming more Deaf individuals into the world of swimming. ‘Our coaches, team-mates, parents, volunteers and officials need training for facilitating outreach and working with the Deaf, for encouraging and keeping Deaf individuals in the ‘swimming family’ at all levels’, states Coach Hobbins.

Greater San Antonio is home to the historic Alamo, Sea World, Six Flags Fiesta Texas, NBA Champ Spurs. The Metro area has a population of over 2.23 million, the 25th-largest metropolitan area in the United States and third-largest in the state of Texas.

NISD’s district-wide enrollment for the 2013-2014 school year was 101,477 -the fourth largest school district in Texas behind Houston, Dallas, and Cypress-Fairbanks. NISD has a substantial Deaf and Hard of Hearing student community among its student population as do other districts in San Antonio. The district remains one of the fastest growing school districts in Texas, opening three new schools for the 2013-2014 school year.

I would like to be involved as helper, former deaf swimmer during 1970’s and early 1980’s We are looking forward to it.