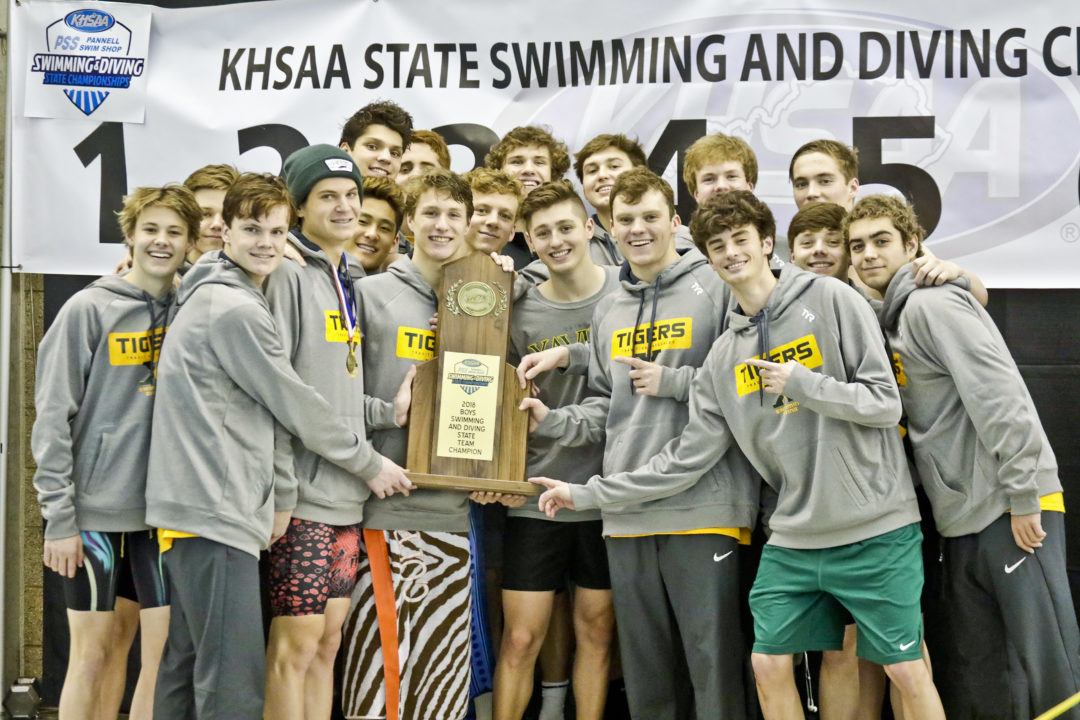 Sacred Heart and St. Xavier both extended their mega-state-title winning streaks, although there were head-turning performances across the board, including a 19-point men's 50 freestyle. Current photo via Chip Dumstorf, Bisig Impact Group

American Record holder Josh Prenot finished 17th in this morning’s 200 breast prelims, missing the semifinal by about one third of a second.

Lexington Catholic wound up on top of the Kentucky High School State Championships combined team scores when all was said and done at the Ralph Wright Natatorium in Louisville. With a total of 316 points, Lexington Catholic took the overall KHSAA team title, bringing it back to a Lexington-based team for the first time since 2003.

Specifically on the boys side of the house, St. Xavier High School snagged its 30th straight state championship and 54th state title overall. Their point total of 453 crushed the competition, which saw Lexington Catholic claim runner-up for the men in 229, followed by Fort Thomas-based Highlands in 154.

Helping the St. X boys match Bolles with the longest boys state championships was Arizona-bound Aldan Johnston, who decisively claimed 2 individual titles. First in the 200 freestyle, Johnson split 46.58/48.18 to earn a final time of 1:35.76. That smashed his own state record of 1:36.89 set last year, and beat the next closest competitor, Will Cole of St. X, by almost 3 seconds.

Johnston’s next victim was the 500m freestyle, where the senior clocked the only sub-4:30 mark of the field. Touching in 4:25.31, Johnston dominated the race from start to finish, comfortably holding off Henry Clay’s Matthew Street and St. X’s Michael Jones who finished in times of 4:31.48 and 4:32.14, respectively.

Finally, Holden Smith, Dominic Tomchek, Kang and Streater collectively scored a final time of 1:25.11 in the 200 free relay to make it a clear relay sweep.

Making his mark in the sprint events was Trinity’s Hunter Tapp, who fired off a time of 43.99 in the 100 free to become the first Kentuckian high schooler ever to go sub-44 in the event. He held the old mark at 44.65 from the 2017 edition of the meet, but stepped up to a new level and make a name for himself on the national high school sprinting scene.

Tapp fell just short in the splash n’ dash, settling for silver in 20.40 behind North Oldham’s William Tarvestad. An 11th grader, Tarvest cranked out a monster 19.94 to become the first Kentuckian ever under the 20-second threshold in the splash and dash. His time overtook a long standing record of 20.03 set by Dunbar’s Eric Bruck back in 2009.

Lexington Catholic saw 2 of its swimmers snag individual state titles, with Matt Menke nabbing the 100 back win in 48.90, followed by Zach Hils’ victory in the 200 IM. Hils’ time of 1:46.83 checks in as the new state record by over 2 seconds, obliterating his own time of 1:48.93 from last year.

Hils found himself victorious in the 100 fly as well, collecting the top prize in a time of 48.93. The state record of 46.29 is held by now-National Age Group record holder and 200 fly ACC champion Nicolas Albiero of the University of Louisville.

As for St. X’s dominant performance and growing legacy, Coach Todd Larkin told SwimSwam, “The streak is important, but it only plays a small part in who we are as a program.  It motivates the students to add to the legacy, but they also realize that teams from 5, 10, or even 15 years ago can’t help them in the present. We try to take winning and losing out of it. We promote doing your best at all times. Making it happen in the present is what counts, and having nothing left when you touch the wall!”

Larkin continued, “What impresses me so much about our students during this era is the respect they have for the tradition, their faith in the process, and how they embrace being champions. Being a champion means you must respond in an instant, when opportunity presents itself, and having a collective responsibility toward each other. If you don’t have each other’s backs, and you can’t take advantage of opportunities, it’s hard to sustain any type of success.

“I think this year’s teams identity was created by a rough meet vs. our rival Cincinnati St. X earlier in the year. We learned from that experience, and we were determined to get better. We knew we couldn’t just show up at meets, we had to show up! We built some momentum, knocking down pool records, region records, and now state records. The pride this year’s team had for the program was obvious at the end. Our seniors leave a legacy we can build on for the next few years. We realized what a privilege it is to wear the “X”, not a right. I’m very proud of this team and how the swam today at Championships.”

The Sacred Heart Valkyries took their 6th straight girls’ championships, making it 29th overall. Finishing with 520.5 points, the women absolutely dominated the competition, whose next closest point total was represented by North Oldham with 198 points.

In that final women’s event, freshman Crush clocked a wicked fast opener of 50.18, a time that would have claimed silver in the 100 free individual event. Lenihan followed with a solid 51.77, with Donan and DeBeer earning splits of 50.83 and 50.66, respectively, to bring the winning time to 3:23.44.

Christian Academy’s Gabi Albiero, daughter of the men’s ACC runners-up the University of Louisville, was also a double winner, with the sophomore ripping a quick 22.64 50 freestyle, followed by a 100 butterfly win in 53.04. In the former event, Albiero was able to top her own previous state record of 22.80 (set as an 8th grader!) as she battled 4 Sacred Heart swimmers in the splash and dash final.

Notre Dame’s Sophie Skinner won her 4th consecutive 100 freestyle title, taking the win in 50.06. That falls .27 shy of her own state record of 49.79 set in 2015, but was enough to represent the only swimmer under the 51 second mark in the race.

Runner-up in that 100 free was Greenwood’s Maggie Gholston in 51.24, followed by Mary McAtee and Emma Hixenbaugh who both touched in 51.98 to tie for 3rd.

Taking the 200 IM title was Donan, as the 10th grader also from Sacred Heart registered a winning effort of 1:59.63.

Aldan’s 200 Free final time was 1.35.76. In the 500 free Michael Jones’s time is transposed and it’s Michael Jones not Matthew Jones. In the 50 free Will’s last name is spelled wrong. Was someone sleeping when they wrote the article?

C’mon SwimSwam, please proofread the posted articles…It does not take that long…”to earn a final time of 1:36.89. That smashed his own state record of 1:36.89 set last year”