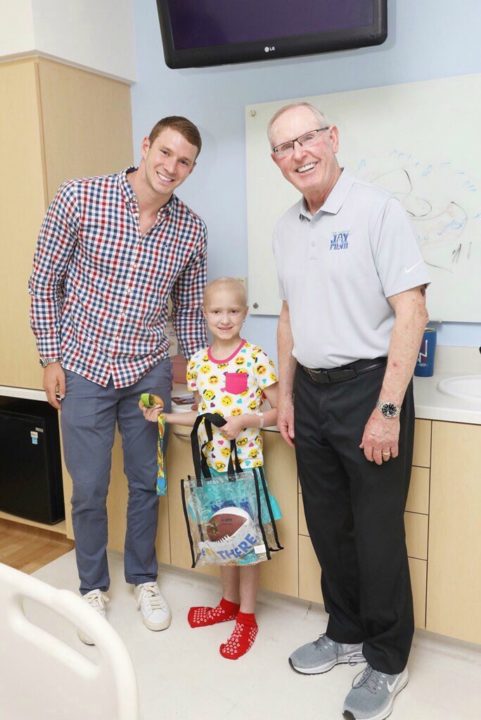 Multi-Olympic medalist Ryan Murphy is staying upbeat during the coronavirus pandemic and is spreading that positivity through his work with the Jay Fund.

Multi-Olympic medalist Ryan Murphy of the United States is staying upbeat during the coronavirus pandemic and is spreading that positivity through his work with the Jay Fund.

Murphy worked with the organization back in 2018 and, when the 2020 Olympic Games were officially postponed to next year, the organization approached the former Cal Bear with an opportunity to continue his personal support through visits to cancer patients.

“He’s a real natural at connecting with people, and the kids loved it,” Keli Coughlin, the funds’ executive director and daughter of Coughlin said of Murphy.

Although 24-year-old Murphy is used to interacting with personal visits, due to the pandemic and COVID-19 restrictions, the swimming star uses technology, such as Zoom calls, to reach out to the patients relishing the personal contact.

His help is especially needed as, according to MSN.com, requests to the organization for assistance have increased 55% this year compared to the same period in 2019. Coughlin points to layoffs, furloughs, and assuming caregiving roles as reasons why there is such a need during this time.

Additionally, these patients have suppressed immune systems, which make them extra susceptible to possible coronavirus infection. This fact alone weighs heavily on them and their families during this crisis.

As such, having a bright light to the tune of an Olympian’s smile and words of encouragement can mean all the world to the kids seeking some relief both emotionally and physically.

Below is our recent conversation with Murphy on what this organization means to him and how he originally got involved.

1) How did you become involved in Tom Coughlin Jay fund?

Tom Coughlin is a staple of Jacksonville.  He was the first head coach of my hometown NFL team, the Jacksonville Jaguars.  He led the Jags to their best seasons ever, and went on to win 2 Super Bowls with the NY Giants.  He came back to the Jaguars in 2017 as EVP of Football Ops.  He is super involved in the community through his foundation, the Tom Coughlin Jay Fund.  The fund assists children with cancer and their families by providing emotional and financial support.  It’s an incredibly successful foundation with footprints in the Jacksonville and NY/NJ area.

I had met Tom Coughlin a couple of times following the 2016 Olympics at Jaguar games.  He had mentioned that his foundation would like to collaborate.  The first event I did with Tom Coughlin Jay Fund was in September 2018.  September is Childhood Cancer Awareness Month, represented by a gold ribbon.  We visited the Wolfson’s Children Hospital and visited the kids.  He brought signed footballs for each child, I brought Speedo beanies, and took pictures with my Olympic Medals.  You could see the powerful impact he had on each child, and it made me realize the importance of giving back.

2) How would you describe your role with that organization?

I’ve been involved mostly on the emotional support side, as their Annual Gala has fallen too close to swimming’s major competitions.  Recently, I’ve been involved in Zoom calls with some of the families that the foundation supports.

3) What do you and the patients typically talk about in the Zoom calls?

4) How do you inspire one another?

I’m inspired by people and the mentality of great people.  I like to learn about people that have done impressive things.  A child with cancer has managed more than I could ever imagine, and there’s a mentality and level of maturity that helps these kids in their hardest moments.  They’re fearless.  I had a conversation with a 15 year old girl who was going to some chemo treatments that day after the call.  I asked her what her emotions were heading into that treatment?  She replied that she was honestly happy to be able to leave the house.  That gave me chills.  All of these children were optimistic and have an incredible perspective on life.  I learned so much from them.

Delighted to see Ryan Murphy take on these positive and uplifting duties at such a difficult time in world history. I made a small accordion noise and sulked for hours when I learned that the 2020 Games had been postponed; Ryan had MUCH more reason to sulk, but he’s a champion! Go Golden Bears! Go Ryan and the young folks he’s aiding in their struggles!