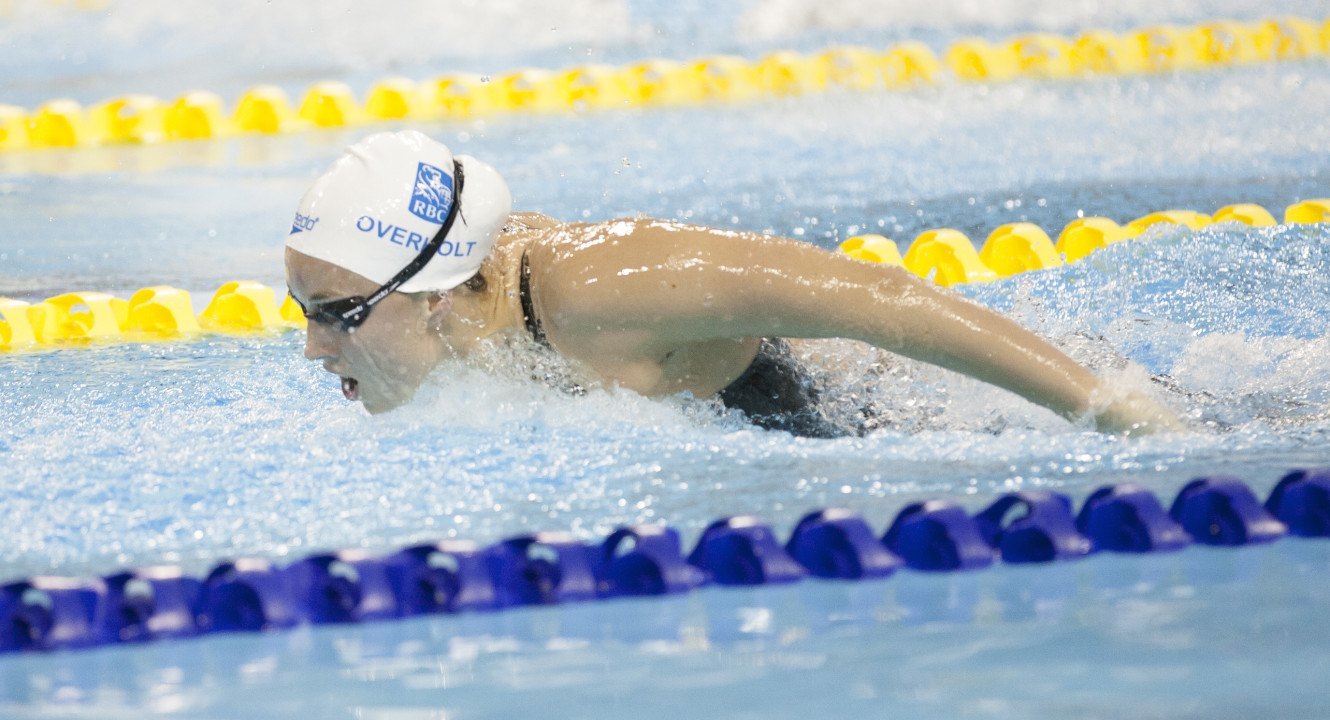 Emily Overholt had an emotional win in the 400 IM on day 1 of Canadian Pan Pac Trials. Archive photo via Chris Tanouye

The opening day of the Canadian Pan Pac Trials have wrapped up, and 13 swimmers have booked their ticket to next month’s Championships in Tokyo.

Taylor Ruck popped off a very impressive 1:55.45 to win the women’s event, and Kayla Sanchez, Penny Oleksiak and Rebecca Smith all secured their spot on the team in 2nd, 3rd and 4th. Ruck, Sanchez and Oleksiak were also three of the six who swam under the ‘A’ cut on the night, joined by Markus Thormeyer, Kierra Smith and Emily Overholt.

Thormeyer won the men’s 200 in 1:47.66, a lifetime best, and will be joined on the relay at Pan Pacs by Alex Pratt, Javier Acevedo and Jeremy Bagshaw.

Smith won the women’s 100 breast in 1:07.57, getting under the cut by .01, while Rachel Nicol and Faith Knelson narrowly missed out.

Overholt had an impressive and emotional win in the 400 IM, coming back from an injury plagued year in 2017 to clock in at 4:42.77. She slid under the cut of 4:43.06, while runner-up Sarah Darcel was a bit off in 4:44.21. Also of note was top seed from prelims Sydney Pickrem scratching out of the final late.

Also booking their ticket to Pan Pacs with wins were Richard Funk in the men’s 100 breast, Mackenzie Padington in the women’s 800 free, and Tristan Cote in the men’s 400 IM.

Note: Sanchez and Oleksiak are given ‘200 FR’ instead of the 4×200 relay under events because they were under the FINA ‘A’ standard. Once at Pan Pacs, swimmers can swim whatever events they want, so ultimately it doesn’t really matter.

Weird that Blair Evans swam like 5 secs faster in 400IM and won’t get to swim at pan pacs and a 4.42 in Canada gets a ticket to Tokyo .. Blair Evans should change citizenship lol

The selection is definitely weird this year in Canada, winner automatically qualifies AND any qualifiers can swim any event once they are on the team. Therefore, I think a lot of competitors at trials this week aren’t very rested and counting on winning 1 swim to get to swim their signature events. Its all strategy with their coaches and training goals. However, regarding the 400IM specifically, it was a strangely slow race… considering Overholt, Pickrem, Seltenreich-Hodgson, Darcel, and Sophie-Harvey are all sub 4:40 swimmers. Scratches, health problems, unusual team selection period (for Canada its normally early April). WEIRD.
– Side note: I bet Ruck could even through down a solid 400IM, her PB is 4:50 from 2015 and her… Read more »

I agree it’s somewhat perverse that someone likely to qualify for the final of the women’s 400IM fails to win selection but that is what happens when national federations impose arbitrary selection standards. My view has always been that if you finish in the top two at trials and meet the international qualifying standard you should be put on the team. That way, we wouldn’t have all these ridiculous, subjective arguments about who merited selction and who didn’t.

Agree 100%.. by the way I don’t get th “down votes” on my previous post.. I was stating facts nothing else .. Overholt fans slightly sensitive, not dissing her win

I think it is the changing citizenship idea that is causing the down votes not the slighting the race winner.

Can Alex Pratt go to both junior Pan PACs and senior Pan Pacs ?