Rosary Girls Back on Top At Illinois States 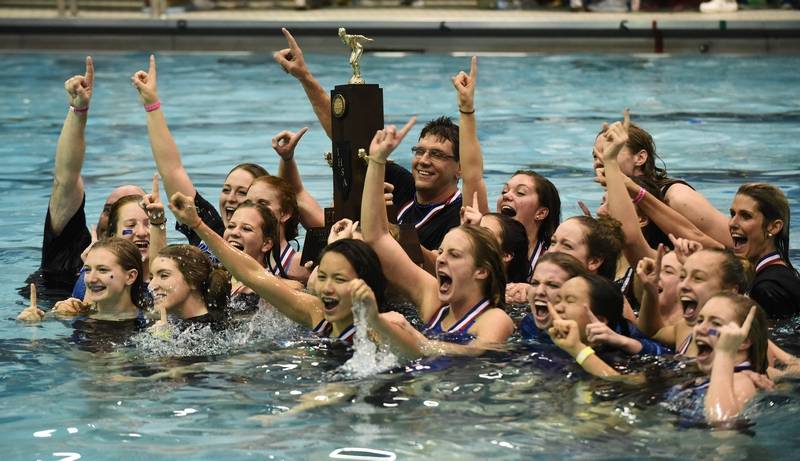 Rosary had not won since 2009, but they were the runner-up last year. Current photo via Rosary High School

The Rosary High School Girls swimming and diving team improved on their runner-up finish at last year’s championship to win the Illinois State championship handily. The team had previously won four championships in a row from 2006-2009.

As usual, the meet was very fast- every winning time under the NISCA Automatic All-American standard for 2015-2016.

Lake Forest had not finished in the top two since they won back-to-back championships in 2002-2003.

The Beads led from the very beginning, winning the opening 200 medley relay in 1:43.69. Junior Alexis Yeager won her second straight 200 IM title in 2:01.58. Freshmen Athena Ye was the only other individual title winner for Rosary, taking the 100 backstroke in 54.97. They also won the 200 freestyle relay in 1:33.72. Unfortunately no relay names were available in results.

Lake Forest junior Daria Pyshnenko had the most impressive performances on the night, winning the 50 and 100 free against tough competition. In the 50 she blasted a 22.59 with two other swimmers coming under 23 seconds: Effingham senior Avery Braunecker (22.81)) and Edwardsville junior Bailey Grinter (22.95). Pyshnenko went 49.70, running down Braunecker with a blisternig 25.65 back half to capture the 100 freestyle.

Another exceptional performance came from Barrington senior Kirsten Jacobsen, who won both the 200 (1:48.15) and 500 freestyle (4:47.08). In winning the 500 freestyle, she matched the achievement of Illinois high school legend Mary Descenza, both won an individual state title all four years. While Descenza did it in the 100 butterfly, Jacobsen is the first Illinois swimmer to do so in the 500 freestyle.

Other individual winners on the day:

As of posting, winners in the events for swimmers with disabilities were not available. We will update this recap as soon as they are posted.

The Rosary Beads led from the very beginning. The Scouts are from Lake Forest. Great job to all who swam!