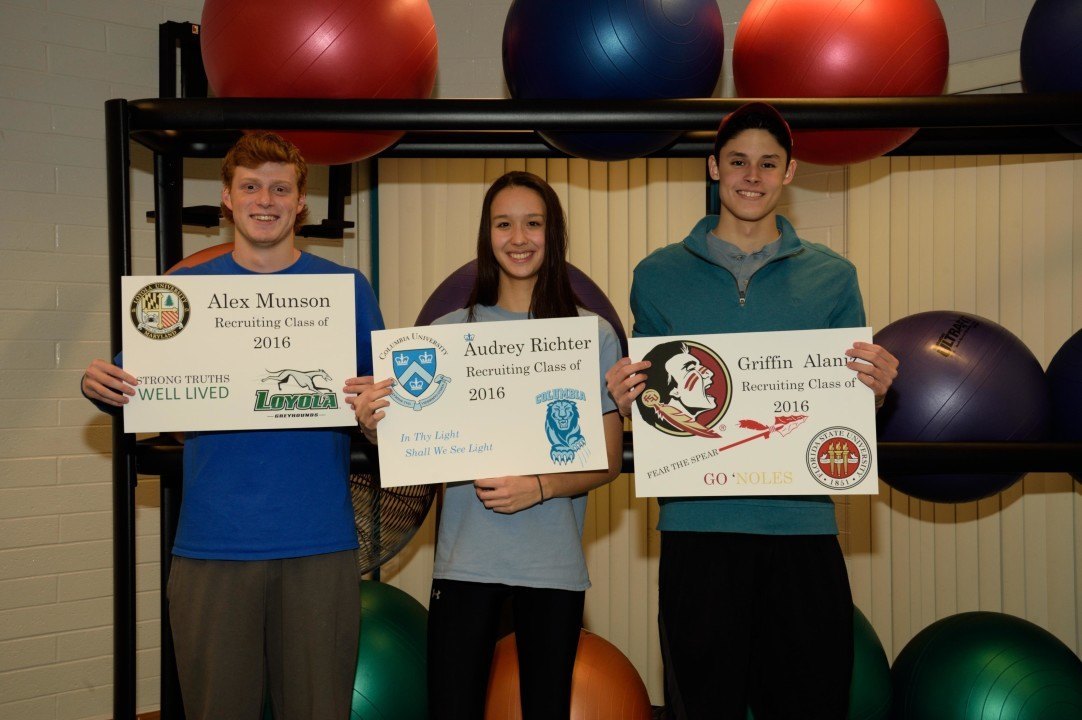 Alaniz is a Winter Nationals and Summer Junior Nationals qualifier, and has represented RMSC at several NCSA Junior National meets. He is a senior captain at Rockville High School, where he is the defending Maryland 3A/2A/1A State Champion in 100 free and 100 back, and the Montgomery County Public Schools record holder in 100 back. Last year, he was First Team All-County and Honorable Mention All-Met. He is also a member of PVS and RMSC team records in the 15-16 200 free relay and 400 medley relay. Griffin was named to the USA Swimming Scholastic All-America Team for the second time this year, and looks forward to joining the Seminoles.

After narrowing his athletic focus on swimming during his sophomore year of high school, Munson has improved rapidly. He is an NCSA Junior National qualifier in several events, and his versatility should help the Greyhounds immediately. Munson attends Our Lady of Good Counsel High School, where he is team captain. He has been a Metros finalist, and was named All-County and Honorable Mention All-Met last season.

Richter is also a two-time member of USA Swimming’s Scholastic All-America Team, and has competed in several NCSA Junior National meets for RMSC. She is a senior captain at Richard Montgomery High School, and multi-time Metros finalist. She enjoys the sprint events, where she has been recognized as All-County and Honorable Mention All-Met. She also is a relay star, and is part of four current RMSC team records in freestyle relays. Richter is looking forward to achieving her goal of attending and swimming for an Ivy League school, and is excited to join the Lions’ sprint corps.

*DISCLAIMER: Richter has not yet been officially accepted to Columbia. As is true with all Ivy League schools, Columbia’s Admission Office will not send its acceptance letter until the beginning of December, along with those of all Early Action candidates. The procedure for a recruited athlete like Richter is for Admissions to review her transcript and SAT scores, “support her application for admissions in the fall,” issue a Likely Letter, then offer her acceptance into the class of 2020.

The three swim in the National Training group at RMSC’s Olney location under coach Dave Kraft, and comprise his first graduating class since he began coaching the group in 2013. Long-time teammates, they also swam together under Kraft in RMSC-Olney’s National Developmental group as middle-schoolers in 2010 and 2011.

Thanks Dave, you’ve made these kids who they are today.

Congratulations, Alex!! Good luck at Loyola! I’ll be waiting to hear all about it.Love, Aunt Jean.