Rikke Moller Pedersen Takes Over Top Spot In The 100 Breaststroke 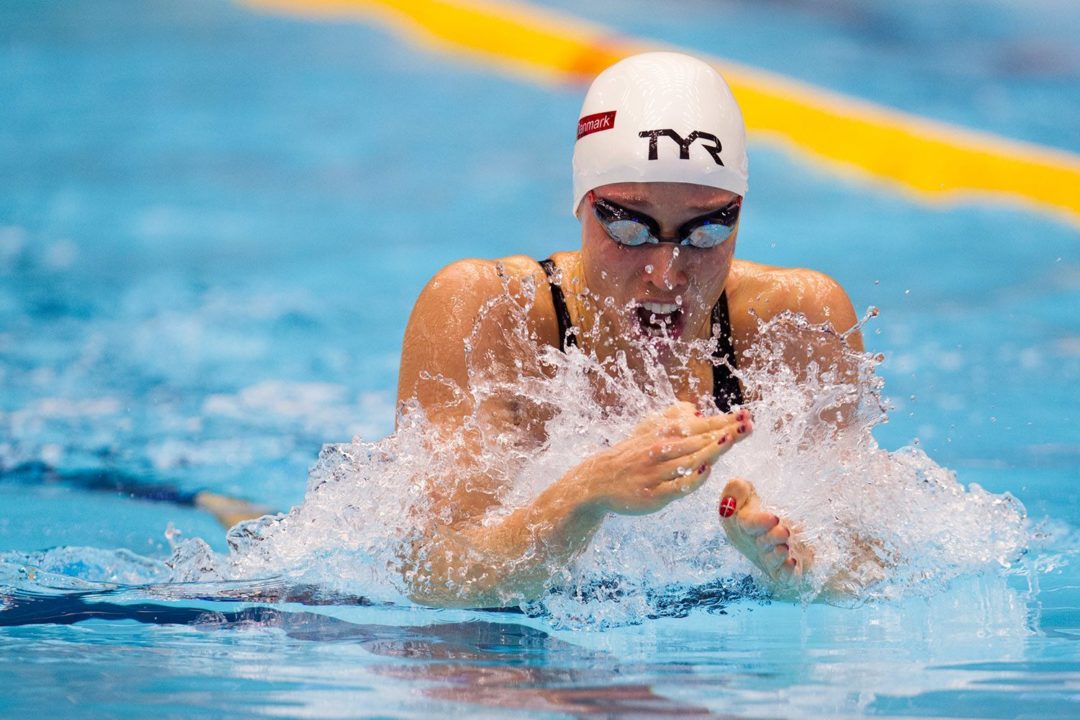 Rikke Moeller Pedersen of Denmark recorded the world's top time in the 100 breaststroke, taking the event at the Danish Cup in a time of 1:06.19... Current photo via Jesper Nielsen | www.sttfoto.dk

On the first day of the Danish Open in Copenhagen 200 breaststroke world record holder Rikke Moller Pedersen of Denmark recorded the world’s top time in the 100 breaststroke, taking the event in a time of 1:06.19.

Pedersen takes over the top spot from American Jessica Hardy whose time of 1:07.05 had been the fastest posted this year. Hardy kept Pedersen off of the medal podium in the event in Barcelona beating the Dane by 41 one-hundredths of a second to win the bronze.

Pedersen was not far off her lifetime best of 1:05.93 which she recorded last summer at the world championships. When looking at her preparation she is ahead of where she was at this time last year where she won the Danish Cup in a time of  1:06.40.

Knowing that she is not fully rested and is focusing on the Swim Cup in Eindhoven it will be exciting to see what the she can do in two weeks time.

Jeanette Ottesen of Denmark took the 50 freestyle in a time of 24.74 just missing her season and lifetime best of 24.54. She was followed closely by Danish teammate Pernille Blume who recorded a lifetime best time of 24.82 putting her tied for fifth in the world rankings with Australian Bronte Campbell and Sarah Sjostrom of Sweden.

Danish swimmers Mie Nielsen and Julie Levisen tied for third in a time of 25.38.

World Championships double gold medalist Lotte Friis won the women’s 800 freestyle in a time of 8:33.34. Friis missed her season’s best of 8:28.65  that she put up at the Austin Grand Prix, which currently ranks fifth in the world.

Daniel Steen Andersen and Viktor Bromer, two men currently in the Great Danes program, battled it out for the 100 butterfly title. Both men recorded lifetime best times with Andersen taking the event in a time of 53.34 followed by Bromer who posted a time of 53.59.

Sebastian Szczepanski of Poland finished third in a time of 53.92.

Brazilian Raphael de Oliveira Rodrigues took the men’s 50 breaststroke in a time of 28.12. Dawid Szulich of Poland finished second in a time of 28.41 followed by Christian Rasmussen of Denmark who posted a time of 28.85.

In the semi-finals of the men’s 50 breaststroke Mathais Andersen set a new Danish Record posting a time of 28.59, qualifying for the final in the third place position. He breaks Niklas Hedegaard‘s 2012 record of 28.72.

RMP already looks very good.
I think she wants to take back her 200 breast world record next summer.
Hopefully she will do it.
I can’t stand that a cheater owns a world record.
Go RMP at the European championships! I will push you. 🙂

one comment on the photo – there is an illegal position of the arms – not in same horizontal plane. She is DQ’d.

I was thinking the same thing! :O