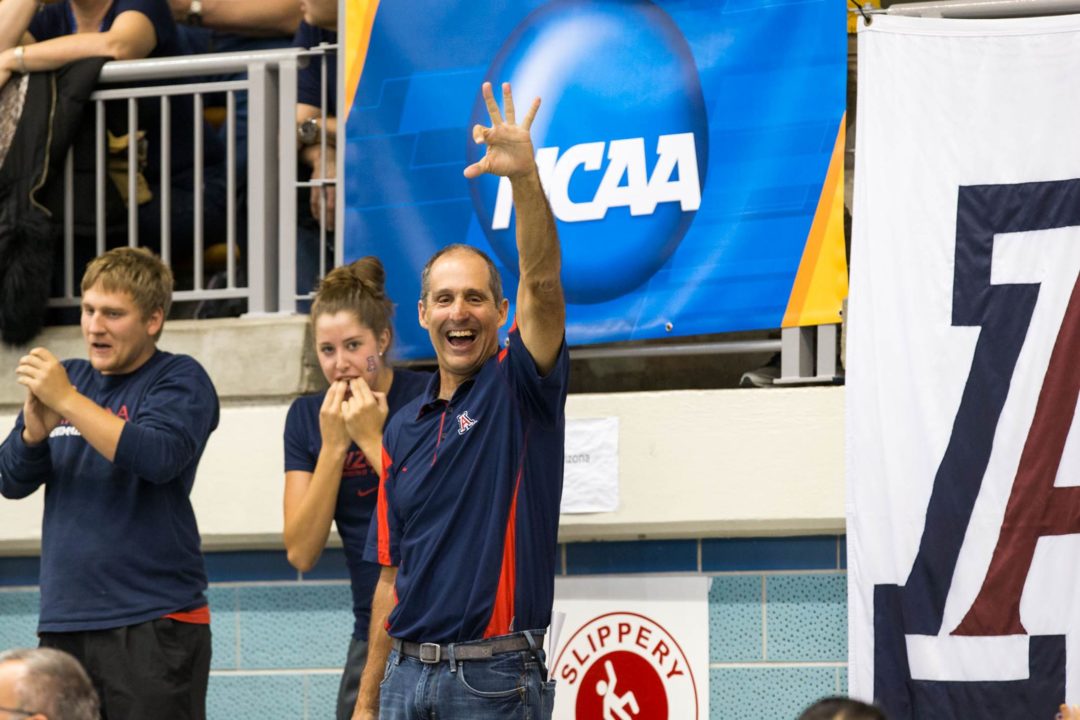 When speaking with Rick DeMont it doesn’t take long to learn that he has a unique outlook on the sport... Current photo via Tim Binning/TheSwimPictures.com

Hopes for herd immunity at the Tokyo Olympics have received a boost after two pharmaceutical companies pledged additional COVID-19 vaccines to the movement.

Rick DeMont is an accomplished swimmer, coach and artist. After having a conversation with him you begin to understand how each one of those roles influences the other.

History in the Sport

DeMont’s achievements over the last 50 years both, as a swimmer and a coach are impressive.

As a swimmer he was the first athlete to break the four minute mark in the 400 freestyle winning the event at the 1973 World Championships in a time of 3:58.18. He also won the same event at the 1972 Olympics, but was later stripped of the medal for testing positive for a banned substance. That substance was in an asthma medication that he had cleared with the USOC before the games.

After his swimming career he started a 30-year coaching stint at the University of Arizona where he was a long time assistant before becoming the Head Coach in 2014. He eventually retired from that position and full-time coaching in 2017. During his tenure he coached 27 NCAA Champions.

DeMont has guided many athletes to Olympic success including Matt Grevers, Roland Schoeman, Lyndon Ferns, Darian Townsend and Ryk Neethling. He was also on the South African Olympic Team coaching staff at the 2000, 2004 and 2008 Games.

In 1990 he was inducted into the International Swimming Hall of Fame.

When speaking with DeMont it doesn’t take long to learn that he has a unique outlook on the sport.

One of the reasons he stepped away from full-time coaching was to dedicate more time to his painting, “I’ve been doing art my whole life and I want to dive deeper into that,” said DeMont.

Painting is something that energizes him and gives him a chance to experience a state of flow, “It gives me energy. I come out ahead when I’m painting. Actually I come out brand new. I don’t even know how to explain it.”

“I like to be there. Sometimes it’s hard to get there, and I wonder why I struggle to sit down and go to that moment. Every time I’m there I know I’ve done the right thing. It puts you in the present moment, and there’s just nothing like it. It is a beautiful state of mind.”

He approaches painting and coaching in very similar ways, “I definitely coach with the same side of my brain as I do art with.”

“It is interesting. I have a note pad when I’m painting because thoughts on swimming flow out of my head. I keep track of little solutions that will come to me. Things like what I’m working on with a specific person, a drill, a stroke, race strategy or technique. All that stuff flows pretty freely when I’m painting.”

“I don’t know why but it opens up pathways to creativity that can be manifested in coaching as well.”

DeMont’s love of swimming has given him an opportunity to gain a greater understanding of peak performance, “I love the sport, I love working with people, and I love the water.”

“I have a passion to explore all the aspects that make up peak performance. That’s fascinating to me.”

“There are tons of ingredients that go into that. Fueling your car, resting your car, visualization as well as mental and physical fitness. There’s a ton of things that add up to it.”

On their journey he hopes the athletes he has worked with have learned more than just how to move through the water quickly, “I want people to be students of themselves. I think I just try to get people on the road to self improvement, and self actualization.”

“My goal is to help people get on that path and to try to reach as many people as possible that way.”

“Connecting with people, and figuring out how people connect is something I feel like if I could understand more about I could reach more people.”

“I don’t think everybody connects in the same way. I know in my coaching career I have connected with certain types of people much better than others.”

Looking back through his years in the sport he has experienced many fantastic moments, but does not see one as more important than another, “I’ve had a lot of moments in my life where I go wow, I wonder if I’ll ever experience that again. That was a lifetime experience, maybe a once in a lifetime experience.”

“I’ve had a bunch of them. It’s seeing people achieve, and accomplish their dreams. It doesn’t necessarily have to be an Olympic gold medal, it is just seeing the light bulb go on for people. Watching them become empowered is hugely gratifying for me.”

We just had Rick on the podcast and it was amazing! Check it out:

I agree Mr. Demont is an icon.

Any update on the retaliation lawsuit against Rick Demont, SwimSwam?

read the article before you downvote you fools