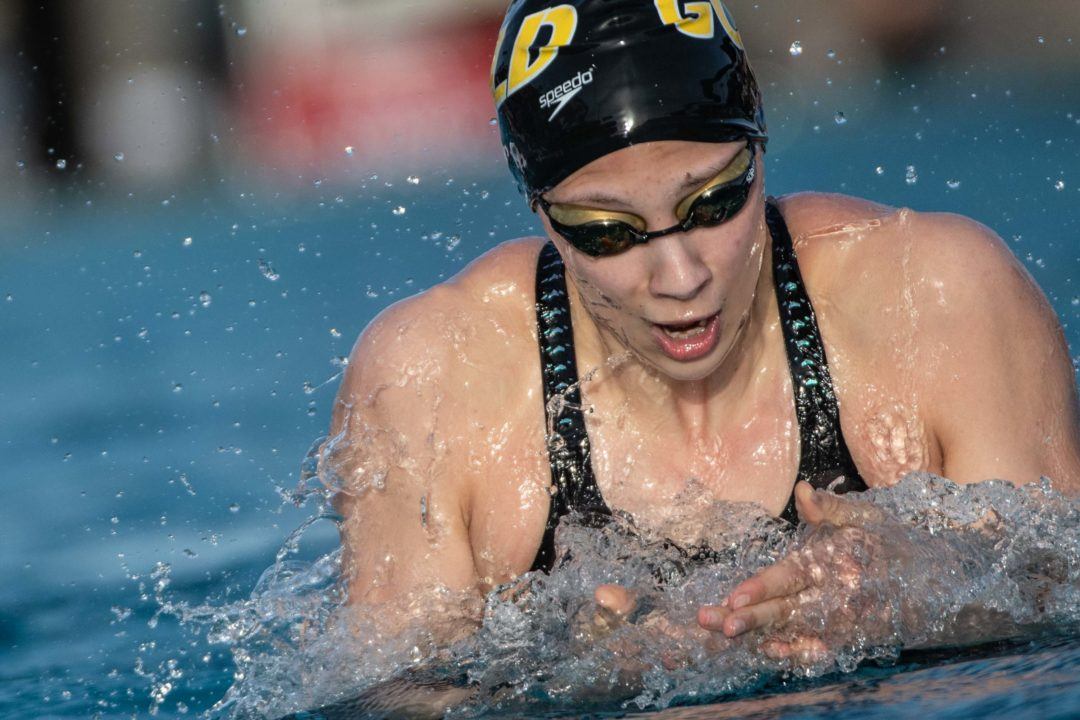 “After my swim in 2016, I was like ‘Thank God I’m not doing another meet,'” Micah Sumrall née Lawrence said when reflecting on the 2016 U.S. Olympic Trials. Well, turns out she swam a few more meets, and tonight, she’s a U.S. National champion and America’s top delegate in the 200 breaststroke heading into the Pan Pacific Championships in Tokyo in two weeks’ time. So, if you don’t remember Micah Lawrence from the London 2012 Olympics, it’s time to refresh your memory, ‘cuz she back!

Sumrall didn’t seriously train for a year after the 2016 U.S. Olympic Trials where she placed 4th, only 54-one-hundredths behind Molly Hannis for the second spot on the Olympic Team. After that disappointment, her career seemed to be finished. Though she ranks as the 2nd-fastest American of all time in the 200m breaststroke thanks to her bronze medal performance at the 2013 FINA World Championships in Barcelona (2:21.74), she missed the Olympic Team. Despite that, tonight she finished ahead of presumptive favorites Bethany Galat of Texas A&M and Indiana’s Lilly King, the world record holder in the 50 and 100 meter breaststroke and two-time Olympic gold medalist.

Inspired by the swimmers she coaches at Chattahoochee Gold near Atlanta, GA, Sumrall got back in the water and attempted to branch out and improve her secondary strokes so that she was no longer “all breaststroke all the time.” Whether she has is still in question; what we do know is that tonight she became a U.S. National Champion in the 200m breastroke by a margin of 1.16 seconds over Bethany Galat, the 2017 FINA World Championships silver medalist in this event, posting a 2:22.06 over Galat’s 2:23.32. King, the favorite, finished 5th in 2:25.31. Heading into Pan Pacs, Sumrall has the 4th-fastest time in the world.

Glad to see her perseverance pay off. Only inspires the young ones that there is a swimming future after college swimming! Congrats!

She dahlia’d me with that last name change.

Really happy to see her come out with a win! Didn’t know that she had been struggling with mental health problems (especially in a sport where “bigger” names like Allison and Missy have opened up more publicly about their challenges), so kudos to her for the courage and perseverance to come back and storm out there. Happy for all of the comebacks that everyone is forging.

I think that to do almost any sport at a world class level, there has to be some element of obsession in the athlete’s thought processes. You have to be obsessed to go through the grind that it takes, mentally and physically, to get to that level. This can lead to great things, but it can also lead to a lot of pressure-induced disordered thinking. Now that swimming is a sport that some athletes can actually make a career on (as opposed to retiring at 22 after college to get a real job), I think that that pressure has only increased in recent years. Fortunately, society is in the midst of de-stigmatizing mental health concerns, so hopefully those athletes who… Read more »

What money is there in swimming? I’m genuinely interested in how swimmers can make a career out of turning pro. I can understand million dollar payouts from other sports, but swimming doesn’t have that. Would you have any additional information on their careers versus just making enough to survive?

Katie Ledecky just signed a $7 million endorsement deal with TYR. That’s a nice start. Phelps probably made at leeast $100 million in her career. Katinka Hosszu made $1 million in prize money alone before the age of 30. Ryan Lochte, after Rio, after the doping, has $800,000 in endorsements still, according to Darren Rovell. Numbers on the endorsements are often hard to come by, but Olympic medalists can generally do very well for themselves. Olympic gold medalists (especially individual medalists) can become very wealthy, and anybody who wants to stay in the sport for the long-run gets to jump a few rungs on the ladder based on having made international teams, which is a long-term benefit that is at… Read more »

I echo the good wishes but she doesn’t have “mental health problems”. She had a normal reaction to a stressful life situation. She stepped back from the sport, took care of herself, and is now racing fast again from a place of enjoyment. I’d say she showed extremely strong mental health.

You doubt what she’s gone through. You think she’s lying about having to deal with stuff you know NOTHING about? That’s pretty poor of you, coach. If I were a coach I would hope I’d be savvy enough to know when I might be the cause of mental distress.

Do you know her personally? How can you say she has no mental health problems? I don’t think anyone would lie about that..

Video wasn’t up when I put my original post. I was responding to what seemed like an assumed diagnosis in a comment when there was no mention on her part of anything other than a difficult year. I don’t doubt that she had struggles at all, or that hers are unique. I was taking issue with the phenomenon that anyone who isn’t happy all the time is labelled with a ‘mental health problem’. Struggling to deal with the pressures of being an elite athlete is not a problem, it’s a normal and common process. When people are made to feel like they have a problem because they have difficulty coping with pressures, expectations, motivation, etc, they have more difficulty reaching… Read more »

I didn’t imply anything. But if you took it that way maybe you oughta do something about it. Not here: at the pool, with your athletes. Because I know from experience that some coaches have everything to do with the mental health of their athletes.