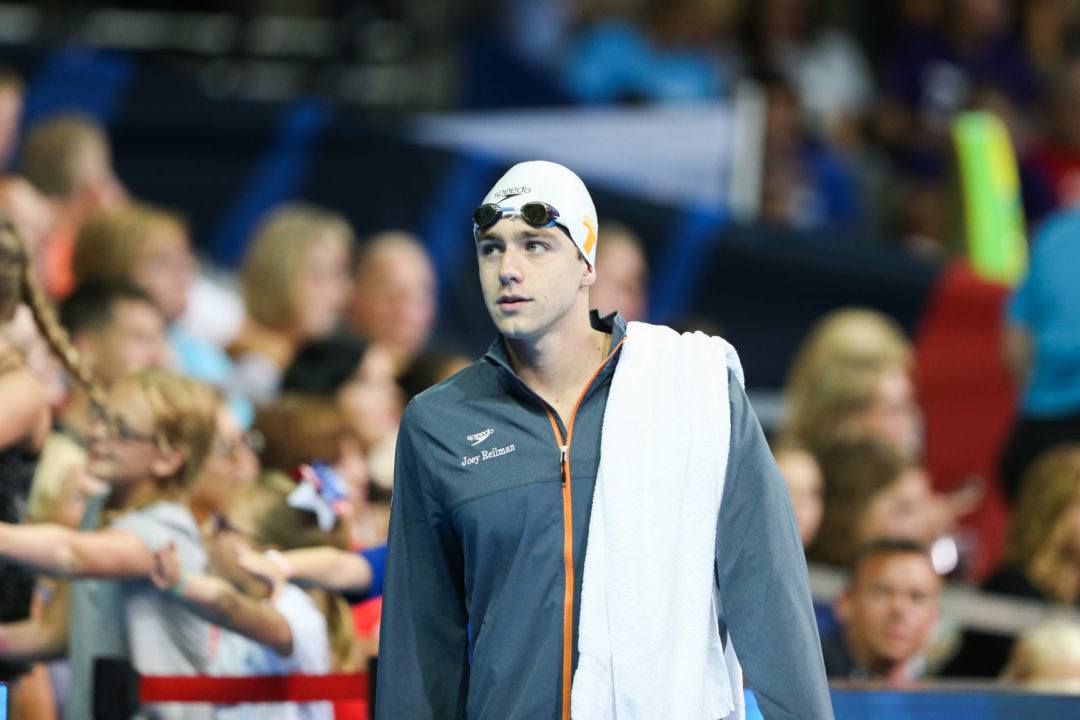 Reilman's PR of 1:58.87 was a best time, moving him right behind Clark Beach in the U.S. rankings. Archive photo via Tim Binning/TheSwimPictures.com

Rising Tennesee senior Joey Reilman became the 4th-fastest American in the 200 backstroke this season, posting a 1:58.87 to finish about two seconds ahead of 2nd place Ian Grum of Dynamo (2:00.74 PR). Reilman finished 7th in this event at the 2017 U.S. Nationals, but just 25th at NCAAs — he’s projecting as more of a LCM swimmer, which will help his chances to qualify for an international roster at the upcoming U.S. Nationals.

Tennessee also got a win out of rising senior Kyle Decoursey, who was 50.38 to take the men’s 100 free.

The Walsh sisters Alex and Gretchen both swam to wins on the final night of this meet in Athens.

browns swim looks like it was probably butterfly. I wonder if she knew it was a freestyle race or intentionally did the wrong stroke lol

Are you referencing to the splits?

Vote Up1-5Vote Down Reply
JP input is too short

If she didn’t know it was a freestyle race, IIRC she did the same thing in a relay at NCAAs last year. That would be really bizarre to make that same mistake twice.

Alex Walsh will make the team this summer in 200 IM heard it here first.

Which team? You mean for worlds next year? It would be cool. She has the 4 strokes to do it. Behind Margalis it looks very open. Eastin is the question. Can she finally translate her SCY success into LCM? I don’t forget Cox. And Baker? Great fight in perspective for the 2 spots.

Madyson Cox hasn’t swum a meet I don’t think since Atlanta GP in March. Something wrong? I am beginning to think so. Hope not!

I disagree, Pebley is on a roll

Not as much as Katz is. Katz was 1:56.7 last summer and has made huge increases over the year. Pebley more or less seems the same.