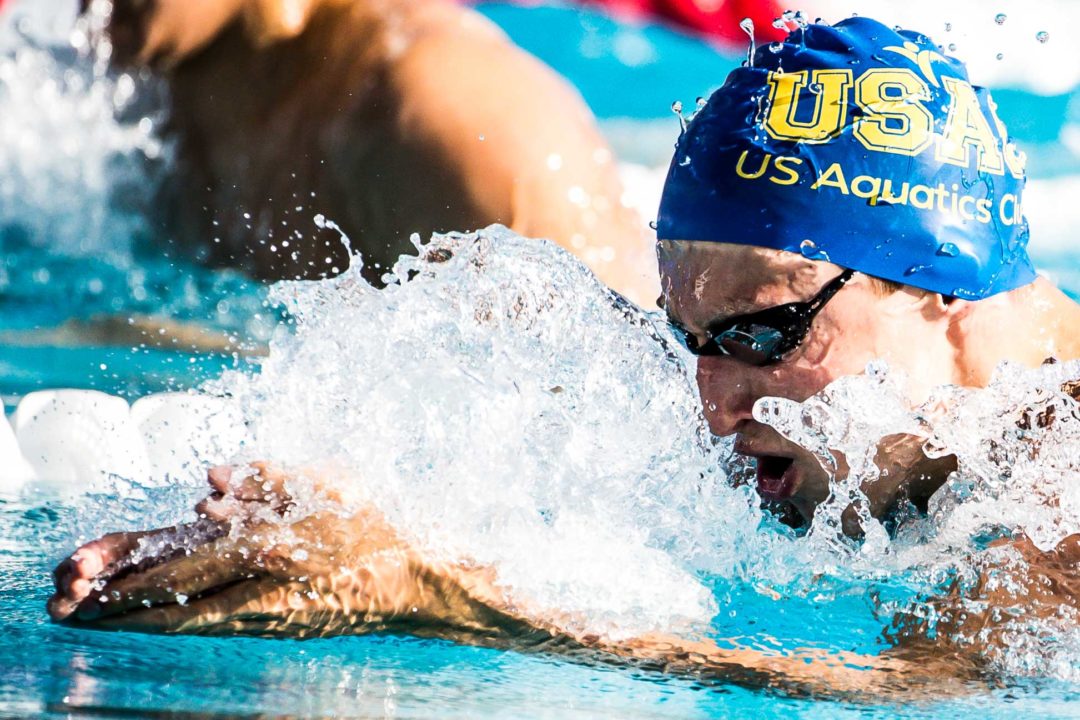 Liam Bell is the best 100 breaststroker in this recruiting class, and he highlights one of the top 10 classes nationwide. Archive photo via Jack Spitser/Spitser Photography

Futures qualifier Carley Caughron has committed to swim for DI Iowa State University beginning in the fall. She will join the Cyclones’ class of 2025.

Riley Trout has committed to swim for DI Florida Atlantic University beginning in the fall of 2021. She will be joining the Owls’ class of 2025.

U.S. Open qualifier Micah Lowe has verbally committed to the College of William and Mary for 2021-22.

South Carolina Gamecocks: the inverse of the past two teams, South Carolina’s class isn’t deep, but has one huge standout. Transfer Lewis Burras went 22.1/48.5 in the long course freestyles this summer – if he can be even close to that fast in yards (rough conversions are 19.2/42.5), he’s a huge pickup.

Florida Gators: Not quite as stellar as last year’s freshman class for the Gators. They loaded up on distance men, though. Three milers come in with times 15:24 or better, and Brennan Gravley is 15:06. German Eric Friese is a great long course butterflyer (52.4) and is going to have a big impact if his speed transfers over well to the short course yards pool.

Northwestern Wildcats: It’s an outstanding class for Northwestern, headed by elite Italian prospect Federico Burdisso. The 51.7/1:54.3 long course flyer projects to be one of the best 2-3 recruits in the entire class. The Wildcats also got Kevin Houseman, another member of a great nationwide breaststroke class. (He’s 53.0/1:57.1). The only downside for Northwestern is that outside of Houseman, pretty much all their high-impact recruits are internationals, and you just don’t know how well they’ll transition to short course racing. Aleksa Bobar (23.7/50.0/1:50.1 long course free) of Serbia is pretty solid in freestyle and Sam Dailley (54.5 long course fly) another good fly pickup.

The distance group gets a boost with 15:08 Will Barao and 15:11-to-1:35.5 rangy talent Luke Thornbrue from opposite coasts. Topher Stensby (19.7/44.1) is probably an underrated recruit in this deep sprint class. This is also a huge freshman group, totaling 14 at present. And they cover a good range of events.

Fast riser to watch: Wilburn, who has been dropping steadily in short course but also had a good long course season, most notably dropping from 51.3 to 50.0 in the 100 meter free.

Another big, deep class with a handful of good ones at the top. Jack Armstrong is a rare 19-second sprinter out of high school, and brings 19.7/43.3 speed to the freestyles. He doesn’t have a great third event yet, but that doesn’t make too much difference – he’s going to have tons of opportunities swimming for accomplished sprint coach Gideon Louw. Armstrong has also had pretty major improvements over the past year, dropping six tenths in the 50 and more than a second in the 100.

In a recruiting coup of sorts, Auburn stole some top Georgia prospects to pad their backstrokes. Aidan Stoffle (47.2/1:44.9) is a solid two-distance prospect who also brings 20.2/44.0 freestyles to the relay pool. Lleyton Smith (48.4/1:44.6) is much more geared to the 200. That’s a big recruiting pool for Auburn to tap, as it not only improves their roster, it keeps top talent away from SEC rival Georgia.

Beyond that, Auburn gets a solid distance swimmer in Grady Wheeler (15:19/4:25/1:38), who should train with distance-oriented head coach Gary Taylor. The rest of the class have some high ceilings: a 54/1:59 breaststroker in Tyler Babinec, plus some more developmental sprint depth from Cole Bruns (20.4/45.2) and Niklas Eberly (20.4/45.8), the latter of whom is also a 47-second butterflyer.

Pretty much the polar opposite of the past two classes, Alabama’s group isn’t big, but does have a couple true standout blue-chippers. Top of that list is Liam Bell, one of the more exciting breaststroke prospects in the nation. Bell has risen from an unranked recruit in 2018 to #13 in the nation as of this spring, and the drops just keep coming. Bell was 55.1 and 2:02 in the breaststrokes as a high school junior, but went 52.2 and 1:57.3 this season. He also brings exciting sprint free talent to the table as well, with best times of 20.2 and 44.1. That’s especially important given one of Alabama’s biggest graduations was sprint breast/free talent Laurent Bams. Bell helps potentially keep that defending NCAA champ 200 medley relay afloat, even with half the legs graduating.

Derek Maas out of Michigan is another good one, with a very strong 1:45.7 IM and nice breaststroke range (54.2/1:56.4). He’s been training with US National Champion Devon Nowicki at his home club. Maas and Bell should make excellent training partners, and their strengths complement each other quite well. ‘Bama went all-in on the breaststrokes this year, with 55-second Jack Zhu also in the mix.

Fast riser to watch: Bell, who notably surged from 2:19 to 2:15 in his 200 breast this summer and is probably in line for another big drop in his 200-yard breast.

Bill Dorenkott has only been the Ohio State men’s head coach since 2017, and this is essentially his second recruiting class. The way he’s been recruiting, Ohio State should only continue to rise in the Big Ten and nationally. This year’s class is outstanding, and really follows what Ohio State does well in recruiting: a few blue-chippers with depth padded out by high-upside in-state prospects.

Jonah Cooper was one of the top talents on the market. He brings 46.3 backstroke speed to a program that mostly punted the medley relays at NCAAs last year for want of a backstroker. Pair him with former top-20 recruit Paul DeLakis (now a junior), and Ohio State has built out the bones of a pretty good medley. Cooper is also 1:44.2 in the 200 back and 1:36.6 in the 200 free, and he could contribute on any of the free relays down the road.

Some NCAA programs mostly ignore diving, and some make it a clear priority. Ohio State is in the latter, and they usually reap the diving point benefits come NCAAs. Lyle Yost is an elite dive prospect, a senior national finalist who has represented Team USA at World Juniors.

Internationally, New Zealand’s Thomas Watkins could be a good pickup. His 2:00.16 in the long course 200 back could make him a 1:42-type coming in the door in short course yards, though transferring long course talent to the short course pool is never a given.

For the rest of the class, Ohio State hauled in a lot of developmental in-state prospects. None of them are early-impact types, but most of them have an intriguing event or two. Jay Johnson (20.5/44.4/1:36.7) might have the quickest road to scoring with his relay ability. The Buckeyes tend to carry a very large roster, but their ability to develop talent also gives them a depth advantage, especially at the conference level.

This must be the first time ever that Stanford men’s recruiting class wasn’t even ranked! The only way for the future could only be up….

They’ll get a big boost too if Alberto Mestre is back, and Grant Shoults gets back to some semblance of pre-injury, and LeVant is 100%. Those were relay legs – not to mention individual points – they really could have used at NCAAs.

Whatever happened to Alberto Mestre? Did he ever leave?

Maybe was hurt? Because he swam at Pan Ams, as well as several meets in the spring/summer, still on the Stanford roster on their website.

Hasn’t he been training with the UF pros all summer.

Christian Stzolcman is a rising sophomore at Auburn not an incoming freshman.