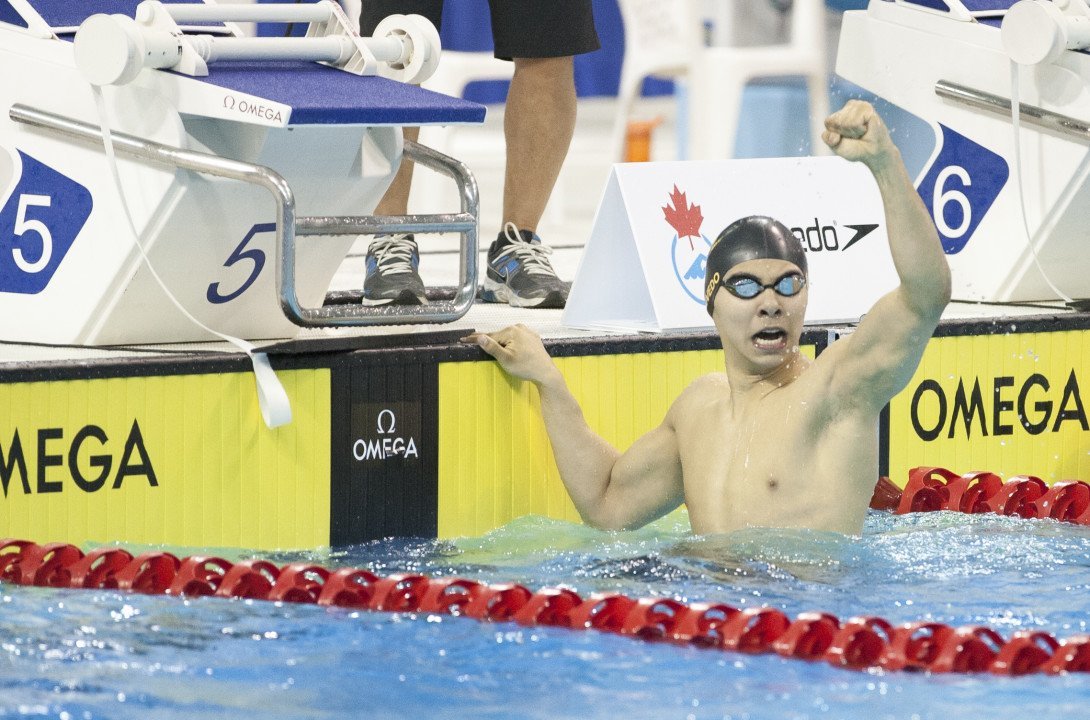 The Georgia Bulldogs have a small class, but with Javier Acevedo at the helm, they landed in our top 8 Current photo via Chris Tanouye

Today, we’re examining our next four men’s 2016 NCAA recruiting classes, which includes an SEC squad coming off an incredible summer, a Pac-12 team looking for a rebound season, and two teams from the ACC.  Here are the 5th-through-8th-ranked Men’s NCAA Swimming & Diving classes, with the top 4 to follow tomorrow:

The Bulldogs signed just three swimmers (none of which made our top 20 list), but there’s no question they belong in our top 8, particularly when one of those recruits is junior world record holder Javier Acevedo.  At Canadian Olympic Trials in April, Acevedo dropped a 53.67 in the 100 backstroke, smashing the previous junior standard of 54.03.   Georgia is all set on their relays next season with backstroker Taylor Dale, but Acevedo is clearly the future for the Bulldogs.  His prowess extends well beyond sprint backstroke, as well, with best times of 23.2/49.9/1:51.0 in the 50/100/200 LCM freestyle, as well as 2:00.2 in the 200 backstroke and a blistering 2:01.9 in the 200 IM.  Even if the transition to yards isn’t smooth immediately, Acevedo will still be an integral part of Georgia’s NCAA squad.

The Trojans took a hit with the decommitment of Markus Thormeyer, a 49.4/1:48.2 LM freestyler, but are still bringing in four fast swimmers that have some intrigue.  Mark Jurek is the lone top 20 recruit of the group, but given how stacked USC’s most recent classes have been, Dave Salo may not have that much scholarship money to dole out.

Jurek is a versatile talent from Phoenix, but his strongest short course event is undoubtedly the 200 fly, where his best time is 1:43.7.  That time would have been fourth at Pac-12’s last season, right on the boarder of qualifying for NCAA’s.  Outside of the 200 fly, Jurek has been 1:37.4/4:23.7 in the 200/500 freestyles, and 1:47.0/3:48.3 in the IMs.  Those IM times are a bit faster in terms of college ranks, and it’s also where he’ll likely be focusing; beyond rising sophomore Patrick Mulcare, the Trojans have minimal youth in those events.

USC bounced back from the loss of Thormeyer nicely with another foreign addition: Mario Koenigsperger of New Zealand.  Koenigsperger has been 28.7/1:01.8/2:16.3 in the LCM breaststrokes, as well as 25.1 in the 50 fly and 23.4 in the 50 free.  Much like the IM, the Trojan breaststroke group is mostly comprised of rising seniors (save for Carsten Vissering), so the addition of Koenigsperger provides much-needed long-term depth.

Rounding out the group are sprint freestylers from both ends of the country in Thomas Reed and Nikolai Syssoev.  Both will be asked to step up right away to help an ailing sprint freestyle group; in stark contrast from the 146 relay points and two relay titles they posted at 2015 NCAA’s, the Trojans scored just 20 relay points in Atlanta this past March (and just two of those points were in the four shorter relays).  Syssoev (20.3/44.5) and Reed (20.9/44.7) will be expected to play a part in turning that around.  Syssoev is the faster of the two, but Reed has the higher ceiling; growing up almost exclusively as a water polo player, Reed didn’t compete in his first USA Swimming meet until July of 2015.

All indications suggest this is the fastest UNC class in history, and it comes at a time they need it most.  The balance of powers in the ACC has shifted dramatically in favor of the neighboring NC State Wolfpack, the addition of Louisville to the conference has added another roadblock, and UNC just graduation 18 of 20 relay swimmers from ACC’s.  However, if they develop, this class has the talent to turn the tide.

UNC also added two huge transfers, as well.  Craig Emslie, who spent two years at NJCAA powerhouse Indian River, is a 20.2/43.5/1:36.0 freestyler with even more impressive breaststroke times (52.6/1:56.0).  That 52.6 is already good to score at NCAA’s, and nearly two seconds faster than the next best returning Tarheel swimmer.  Jorden Merrilees fills in the other side of the event spectrum.  Merrilees competed for two years at Oakland University, where he set multiple Horizon League records and established best times of 1:35.5/4:16.7 in the 200/500 free, 1:43.1 in the 200 back, and 3:45.7 in the 400 IM.  He’s showing no signs of slowing down, either; while redshirting this past season to compete at Australian Olympic Trials, Merrilees crushed his previous lifetime bests in the 100 (51.0) and 200 (1:48.1) freestyles.

Brendan Feehery is the final notable in this class.  The Dallas native–who happens to be the nephew of 1996 Olympic gold medalist Brad Bridgewater–brings in a solid backstroke 49.8/1:46.0 combo to help rebuild a once-deep group that lost some key names to graduation.  In addition, he’s a 1:47.6/3:51.1 IMer.

After multiple ACC team titles and climbing the NCAA standings, the Wolfpack are just starting to get high school talent on the level of the “typical” powerhouse schools.  Given what they’ve demonstrated in terms of developing swimmers, we could be in for some scary results a few years from now if these types of recruits keep walking in the door.  Between these eight names, the Wolfpack sufficiently covered every event with some major talent, outside of maybe the 400 IM:

Warner is from Auburn not FSU

Vote Up30Vote Down Reply
Other person

And is it safe to say Farris has jumped these #6 and #8 recruits on this page as a top 5 recruit. And yes I know you guys just left the rankings from beginning of year, merely a question.

I could definitely see Michigan and Florida swapping spots though. Anyone else have any predictions?

As someone noted about the 9-12 article, I think Texas may be out of the list. Maybe not enough scholarships to offer anyone after the monster class last year? Would love to be wrong.

Texas’ highest ranked recruit on collegeswimming was #100. They got nobody this class. A friend of mine that was recruited by Texas told me that they were giving out literally no money at all (and he’s on the Jr. Pan Pacs team!!), so he went to Michigan instead.

I’d maybe swap Michigan and Stanford. Feliz Auboeck is comparable to Shoults as a top guy and while Sweetser could be a top 8 miler I think Michigan’s class has better depth

Fair point. I know Stanford picked up a great diver as well as the Malaysian national record holder in the 50 freestyle. (23.1 & 49.7 50 and 100 LCM.) I would also argue that Stanford gains the edge with 4(!) incoming freshmen who are 1:36 and below (1 being a 1:33) in the 200 freestyle, which will definitely boost the 800 free relay. But you make a great point and I wouldn’t be surprised with Stanford coming in at #3, either.

Yeah, we need Skip Kenney back!

Hadn’t heard about the Malaysian guy, that probably puts them over actually. Who’s the fourth 1:36? I only count Shoults Murphy and Macmillan

I should hope not, as that’s some ways from being a factor, even on a relay. Shouldn’t matter though as I believe they are getting Tom Kremer back?