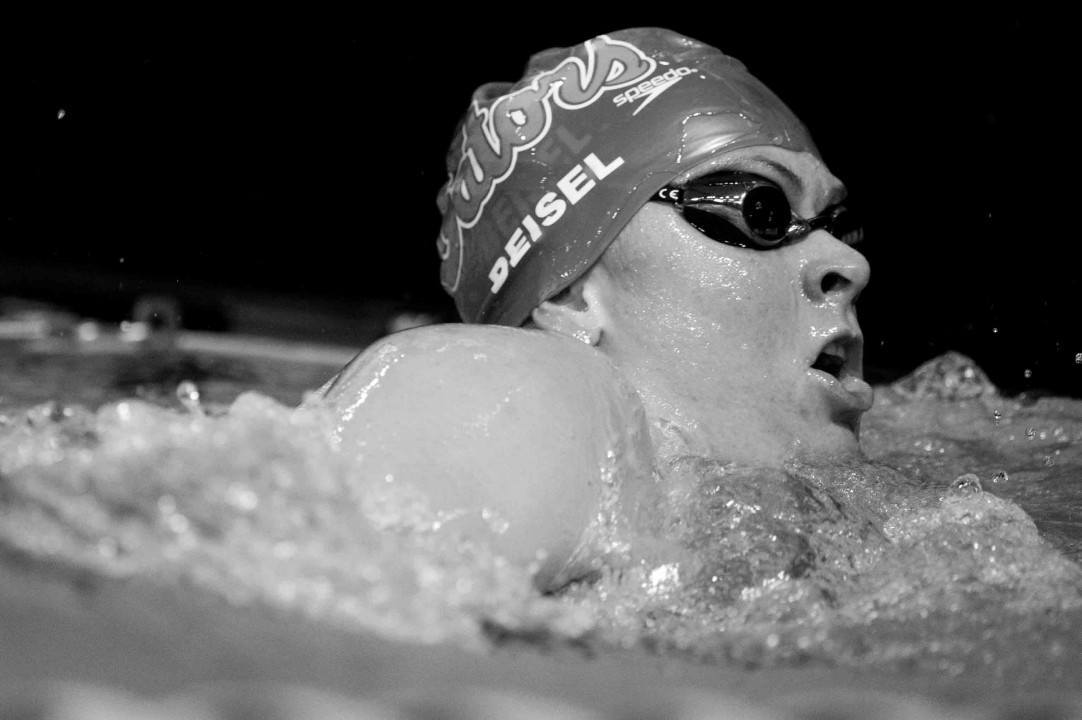 Pro Swim Series leader Elizabeth Beisel is scheduled to make the short trip to Orlando for next weekend's meet despite suffering a groin strain in Austin. Archive photo via Mike Lewis/Ola Vista Photography

Initial psych sheets for the 2015 Arena Pro Swim Series stop in Orlando – the third locale in this year’s series – have been released. The meet begins Thursday, February 12th and runs through Saturday, February 14th.

All of the usual Pro Swim Series stars are at this meet, with the exception of Katie Ledecky, who is finishing her high school career in fine fashion this week at the DC Metro Champs. We’ll have a full preview next week, but a few things that jumped out at us immediately:

1. Alia Atkinson will be swimming her first meet since tying the World Record in the 100 short course meter breaststroke in December at the World Championships in Doha, Qatar. She’s entered in the 100 and 200 free, the 100 fly, and her specialties the 100 and 200 breaststrokes. Among her breaststroke competition will be Tennessee undergrad Molly Hannis, Italian star Lisa Fissneider, and top American Breeja Larson. This is almost a home meet for Atkinson, who is a Jamaican national but trains at the South Florida Aquatic Club.

2. Hannah Miley is in town for this meet, and she will give Atkinson a good challenge as well, especially in the 200 breaststroke. Miley, one of the best swimmers in the UK, is the two-time defending Commonwealth Games champion in the 400 IM, and she’s entered as the #2 seed in that race against the likes of Olympic medalist Katie Hoff, Caitlin Leverenz, and…

3. Elizabeth Beisel. Beisel, you will recall, recently pulled out of the U.S. team that went to Perth, Australia for the BHP Aquatic Super Series due to a groin strain. Because she lives and trains in nearby Gainesville, this meet might be an easier one for a muscular strain due to shorter travel times, but that groin will be especially tested on the breaststroke legs of the IM. Beisel currently leads the women’s side of the Pro Swim Series by a healthy margin over the absent Ledecky, the present Dominique Bouchard and Caitlin Leverenz, and the absent HOsszu in the 2-5 spots.

4. Ryan Lochte is entered in the 400 IM for the second-straight Pro Swim Series meet. In Austin, he took 3rd in a respectable 4:18.68, but afterward talked about how badly the race hurt. He’s the defending Olympic Champion in the event, but continues to teeter back and forth on whether or not to race it.

5. Micah Lawrence, who suffered an undisclosed lower leg injury in Perth, is not entered in Pro Swim Series – Orlando. While an initial statement from SwimMAC Carolina Team Elite, the club she trains with, indicated that she might be back in the water training already, Lawrence won’t race at the Pro Swim Series meet.

Lisa Blackburn at 43 years is the oldest competitor here? Also kosher is entered in the 100breast. When was the last time he raced?

Erika Braun of the Marlins of Raleigh is also 43.

I know Ledecky is in a league of her own, and thus deserves special mention, but doesn’t look like we’re going to see many US high school or college swimmers, period, at this meet, as it falls right in the middle of championship season for many high schools, and near conference championships for NCAA teams. I don’t even see any high school aged professional swimmers entered…