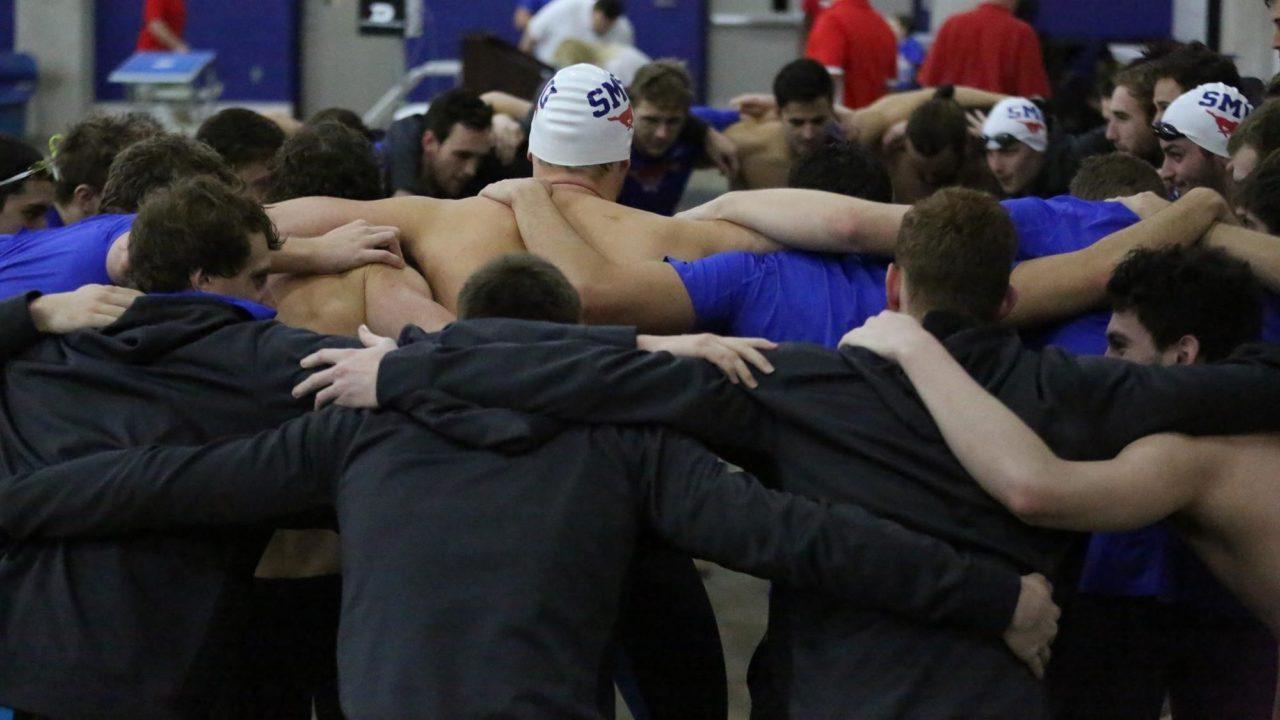 There were 3 workouts going on today at Southern Methodist, and by scrambling around the pool deck, I was able to get snippets of all 3. Current photo via SMU Athletics

There were 3 workouts going on this day. I was able to get snippets of all 3.

Mitch’s sprinters were doing some pretty fun stuff with parachutes. They would go 3×25 where  each 25 you wold get less and less resistance. The first 25, you’d have a parachute and a partner wold be holding it for about 10 yards, then they would let go and you would blast the rest of the 25. On #2, they would swim a 25 normally with the parachute. On #3, they would take the chute off and go a 25 fast. Then they would hop out and go a 25 off the blocks, with video recording so they could watch themselves after.

Eddie’s guys were doing a pretty stock pace set. 4 rounds where you’ve got 3×25 descend upfront, followed by 2×50 @ :50 at 200 pace. That was followed by a little EZ swimming, and finished with a 25 how they want to finish their race. So essentially 4 rounds of a broken 200 at pace.

Back to Mitch’s side of the pool, he had his more distance oriented guys going 5 rounds of 75 pink, 100 AFAP (as fast as possible), 325 EZ, then do it all again. So while a lot of the other groups you can see a start to the comedown for conference (similar to the women’s group), not as much of a comedown with these guys.

I see you Gomez! Putting in some work out there!

Great video, but I can’t help but be bothered by the one last 100 guy’s awful breaths off the wall

not sure why there are so many down votes, I timed it and even give or take a second it is not a 49.9

Not arguing the difficulty of holding that type of pace but there is a right way and a wrong way to breath off the walls and he was absolutely doing it the wrong way. He killed his speed on every breakout and you could see that in the video

come to UCSD with Marsh