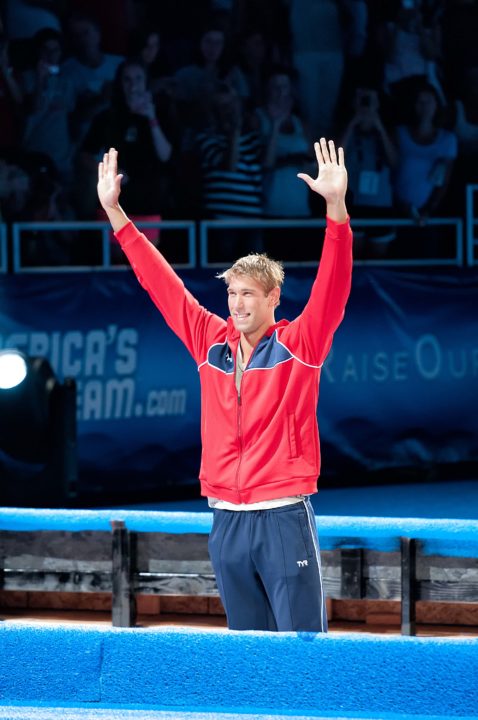 If Matt Grevers can repeat a 52-low on this medley, the Americans should go wire-to-wire. (Photo Courtesy: Mike Lewis/OlaVistaPhotography.com)

For our relay picks, we’ll lay out the previews a bit differently. We’ll present each relay with a best time, an aggregate time based on entry times, and the likely relay members, and then lay out a bit of analysis on each grouping. On medleys, this can sometime be a bit of a guessing game, but we’ll take a stab at assembling the best relay.

For athletes marked with an asterisk (*), they will not swim this event individually in London.

Breakdown: The Americans are huge favorites to win this relay, if for no other reason than their balance. The Americans probably could no longer beat a “world’s best” relay, made up of everybody not from the U.S., but the key to their dominance year-after-year is the fact that they can afford to have one, or even two, of their swimmers put up poor races, and still expect to win gold. That’s why they’ve never lost this event at an Olympics (aside from the 1980 boycott). The weakest swim last year was probably on the backstroke – though few across the field swam well – and with Grevers’ 52.0, that shouldn’t be a problem this year. We’ll give it about a 10% chance at the World Record – but only if Adrian finds his inner Dave-Walters and goes sub-47.

Breakdown: The Australians could sit about 4th for the better part of this race, but James Magnussen has already shown last year that he is a more-than-capable relay swimmer to go with his impressive individual feats. He’ll make up close to a second on the Americans, Germans, and Japanese. That should be enough to pick-off two of the three, especially with the middle two legs looking better than they have. Stoeckel on the backstroke leg will be the biggest question mark, but he’s been pretty good this year.

Breakdown: The Japanese have a few big advantages in this race over the Germans and the French with whom they’ll be battling for the bronze. One is obviously Kosuke Kitajima – the best breaststrokers in the world are very far ahead of the second tier, and Kitajima is at the top of that group of “best”. The other is the consistent Ryosuke Irie – he was the only swimmer at last year’s World Championships to break 53 in this relay leadoff. Expect them to be in the lead, or neck-and-neck with the Americans, at the halfway mark. What they do with their back-half will be huge in their final result, but they never found their sprint freestyler (they don’t have a single one on the roster, even as relay only). That means we’ll probably see Matsuda on fly (his sprinting is improved this year) and Fujii anchor (he’s much better than his 48.88 flat-start indicates). Could be a painful fade back to the field.

Breakdown: Because of Hendrik Feldwehr’s injury, vom Lehn probably gets the spot on this medley, but that won’t likely result in as much of a downgrade (if any) as we would have seen in past years. This aggregate time is a bit misleading: Biedermann doesn’t swim the 100 free from a flat start on a taper often, but is capable of a 47-low on a rolling start. Benjamin Starke has been very good this year, but the Germans have a similar challenge of timing as the Americans do.

Breakddown: Again, emphasize the backstroke. Camille Lacourt, if he’s on at this meet, will be matched only by Matt Grevers. Hopefully, this squad can avoid the prelims meltdown that they had at Worlds that caused them to miss the final.  With newcomer Giacomo Perez-Dortona likely taking over the breaststroke spot, and Clement Lefert providing a much more stable option on the fly leg, the French are dangerous. Yannick Agnel shifting his focus to the freestyle races doesn’t hurt either. There’s still some trepidation here, though, after what we saw last year. The middle two legs will be significant for this team’s success.

Breakdown: This is another relay that’s all about “balance”. With so few relays in the world being able to put together four good legs, this Dutch relay surprised some people to place 5th at Worlds last year. Their secret weapons are their back half – Verlinden is a very underrated butterflier, and Verschuren has proven to be an outstanding relay swimmer. There’s a chance for this squad to medal, if one of their two backstrokers steps up.

Breakdown: This Brazilian relay seems like it could be great. But they are going to be in a huge hole after the backstroke, and that will hurt. There’s been a lot of talk about moving Cielo to the fly leg and letting someone like Nicolas Oliveira, renowned for his relay skills, anchor. Afterall, Cielo is the World Champ in the 50 fly. But that doesn’t seem like it’s part of the plan – Cesar hasn’t been swimming any butterfly, and they left him as the anchor at Pan Ams. At the Olympics, its best to let everyone swim their primary stroke – especially in a relay as emotional as this one. They’ll be expecting him to split under a 48 for this move to make sense. Most of the drop for this team to medal will be counted to come from Felipe Silva’s improved breaststroke.

Breakdown: This is an underrated Polish relay that has a good chance at winning the battle with Great Britain, Canada, and Italy as well as a few other countries for the last spot in the finals. The Poles seem poised to slide Konrad Czerniak, the world’s number two butterflier, over to the freestyle leg. He’s the country’s best in both races, but they have butterflier Oskar Krupecki on the roster as a relay only swimmer, and nobody aside from Czerniak in the sprint group.

What about the Russians?

I personally think that France has the potential to drop quite a lot of time. Even though they don’t have Duboscq they do have the fastest Medley relay time from 2010 and 2011 combined from Euros in 2010. Add to that the fact that Gilot on anchor especially is a proven relay man (44’94 in Dubai anchor medley/47’3 in Euro 2010/47’2 in Shanghai) and that Lefert is really a lot more stable than Bousquet on fly, I think the French could look quite dangerous.

Also curious about Brazil. Pereira’s a proven 53 on back – wouldn’t they use him over Orzechowski?

You’re right – overlooked Pereira. Not sure he drastically changes their outlook though – has he been 53 low? Best I can find is his 53.8 from earlier this year. FWIW, they pulled him off of the finals relay at Pan Am’s last year.

He was not a 100 back swimmer.. he swan this year just for grabbing a relay spot..

it was his last swim of the Maria Lenk and he was already a little tired on a meed he was not tapered.. based on Albertinho word he will maybe even swim 100 back, hoping he has time in him to go to final.. so a 53 low near flat is not impossible if he is fully tapered.

the X on Brazil is acutally the fly leg.. if he can keep with the aussies till end… Bra and Aus will sizzle through the field with a huge battle..

I can’t see how BRA will be on level with AUS after fly.
Maybe you know something about the brazilians that I don’t

2 Things only that I can know

França was still about 3 to 4 kilos heavier than the weight he will have at London..

Well, Medley relay in London will also be on the final after a long 8 days. And pereira will also have to swim the prelims for Brazilians to have a chance to qualify. The Aussies will likely rest ALL their four final swimmers and swim completely different ones for prelims.

Franca may swim faster, but Rickard has consistently overperformed (relatively much faster than his individual swims) over the past 5 years major championships.

And Wright will be faster than any brazilian flyer.

Still can’t see how BRA level AUS on current and past forms.

I think França will be around 58 high on relay.. probably faster than any australian… TP will only swim 2 events before (200 and 400 medley, he dropper his 200 back 200 breast and 200 free even before the olympics). So he will be rested even with a morning swim..

Rickard went 59.32 on relay last year and.. this will probably be what França will have on Flat start by london.. so he will be rested.

If TP swim what his coach thinks he can (53 low) and França swim a 58 high.. he will probably open a lead (agains the aussies) good enough for Kaio to keep Wright at bay.

I am pretty sure that Stoeckel’s and Rickard’s coaches also think they are capable of swimming 53 flat and 58high on relays.

Should we count this as well?

Call me a skeptic, but I doubt Pereira went a 53.8 untapered given that he went a best time (textile) in the 200 IM and a near best times in his other events at the same meet. The guy is a great swimmer but some people need to cut down on the green, gold and blue kool aid.

did you not know that Brazilian swimmers are quite unique: They can be both untapered and tapered at one meet.

example:
Few weeks out of Maria Lenk this year, our Brazilian sources (who apparently received information directly from Cielo’s coach) kept telling us that Cielo would be tapered, rested and ready to bust 47mid in Maria Lenk .
But when he could not even break 48, suddenly the same sources said that Cielo was unrested and untapered.

What I know about that stuff..

Cielo and Pereira and França were rested for the meet, but not tapered. Also Cielo times on 100 free usually were pretty much terrible on all Maria Lenk..

All the others I think were on taper already..

true ! also , the weakest link was Gangloff on breast , not thoman on backstroke .