Sydney Pickrem became the first Canadian woman to win three individual medals at the LC World Championships with her bronze in the 200 breast. Current photo via Joseph Kleindl

Pickrem picked up her third bronze in the women’s 200 breaststoke in a time of 2:22.90, adding to the ones she won in the 200 IM early in the competition and in the 400 IM two years ago in Budapest. 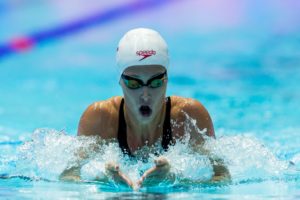 This was the first time the Texas A&M grad has competed in an event outside of the medleys at the World Championships.

“I wanted to try as much as I could to get on the podium,” said Pickrem. “It’s not the time that I wanted but it was better than semis so I’m just moving forward.

“There’s a lot of fast swimming here and that motivates you whether it’s your (main) event or not.”

Masse, who defended her World title in the 100 back earlier in the meet, will have a chance to tie Pickrem on day seven as she’ll compete in the 200 back.

Pickrem’s podium finish marks Canada’s sixth medal of the competition, tying the country’s best-ever showing at a World Championships. In 1978 they won one gold, one silver and four bronzes.

The 22-year-old will compete in the 400 IM on the final day of competition.

Great meet for Pickrem, esp considering all the psychological battles with anxiety she’s had to endure, in the aftermath of her harrowing incident in the 200im last worlds. Proving to not only be a perennial podium finisher in the IM events, but also a world class breastroker! Oh, and how can u miss her vivacious personality and cheeky tongue poking 😛

I’m pretty sure that Joanne Malar got there in 1999

OMG I just looked up 1994 results from worlds in Rome. Chinese women swept all three relays and won 12 gold medals. Everyone else won 4 medals. How did/do they sleep?

Following the 94 worlds the Chinese team continued on to the Asian games in Japan where they had 8 positive tests for PEDs. It was a very famous time filled with all sorts of scandal.

Then, I’m declaring Joanne Malar the bronze medalist from
Rome ’94. Same for Atlanta ’96 with the Michelle Smith saga.

I think Samantha Riley from Australia was the only individual winner not from China ( she’s a breastroker – assume drugs didn’t help China on breastroke ) .

Janet Evens joining Samantha Riley as the only 2 females with victories in 94.