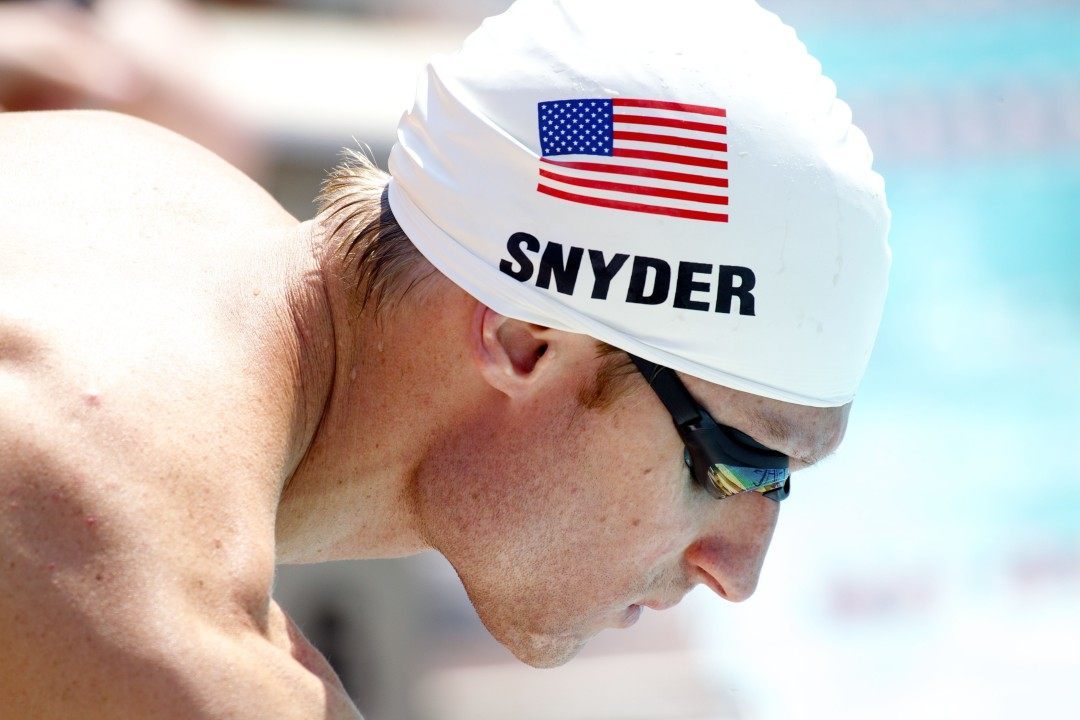 Finals on Day 2 at the Para Pan Pacs in Pasadena, California at the Rose Bowl Aquatic Center was yet... Current photo via Lawrence Curtis/The Factory Agency

Finals on Day 2 at the Para Pan Pacs in Pasadena, California at the Rose Bowl Aquatic Center was yet another amazing day of competition, with three more world records falling. After a great start to the competition yesterday and some amazing races this morning during prelims, we were anticipating some more excitement in this evening’s finals.

My personal highlight of the day, was witnessing Rebecca Meyers of the United States in the S13 women’s 400m Freestyle chase down Valerie Grand Maison of Canada’s world record time of 4:28. 64 from the Beijing 2008 Games and smashing it by over three seconds, with a time of 4:25.31 in this morning’s prelims.  Although I had anticipated Meyers adding to her already impressive nine-second drop from her seedtime, she didn’t break the record again in finals.  She did prove however, that her impressive time drop wasn’t a fluke, rather a drop we can expect Meyers to build upon after staying incredibly consistent by swimming a 4:25.58 in tonight’s finals.  Meyers has really continued to prove herself in the swimming world over the past two years and I think we can expect to see a lot more out of Meyers in the years to come leading into the Rio 2016 Games.

Daniel Dias of Brazil made another impressive appearance in tonight’s finals racing both the 200m Freestyle and the 50m Freestyle.  Dias came in for the gold in the S5 200m Freestyle with a time of 2:26.72 just .21 off of his current world record.  Facing some fatigue, Dias still had a little left in the tank when it came to the men’s S5 50m Freestyle, where he raced to the finish and ended up breaking his world record time of 32.05 from the London 2012 Games in a time of 31.94.  Dias added two more gold medals in addition to his one from last night, leaving his medal count at three gold medals and the two world records.

In the S11 men’s 100m Butterfly Brad Snyder of the United States and Keiichi Kimura of Japan had an exciting race to the finish with Snyder touching Keiichi out by just nearly .20 of a second.  Snyder finished in a time of 1:03.66 to secure his second gold medal of this competition and Keiichi just behind him at a 1:03.87.  Although, that wasn’t Snyder’s only impressive race of the evening, as he also added another gold medal to his collection in the S11 men’s 50m Freestyle with a time of 26.42 leaving his medal count at three gold medals over the past few days.  Snyder will definitely be one to keep an eye out for over the rest of the week and leading into the Rio 2016 Games.

Alongside Meyers’ impressive performance in the S13 women’s 400m Freestyle, Team USA also had Colleen Young and Martha Ruether come in for the silver and bronze respectively.  Young finished with a time of 4:54.92 and Ruether with a time of 4:56.49 giving the Team USA women their third podium sweep of this competition.

In the S7 women’s 50m Butterfly, 15 year old Nikita Howarth of New Zealand had an impressive swim in tonight’s finals, winning the gold in a time of 35.35 with Brianna Nelson of Canada coming in for silver in a 36.10 and Cortney Jordan of the USA in for bronze in a 36.15.

We cannot forget about the nail biting race in the S10 men’s 50m Freestyle, where Phelipe Rodrigues of Brazil came in for the gold in a 23.47 with teammate Andre Brasil not far behind for silver in a time of 23.63 and Nathan Stein of Canada just .01 of a second behind Brasil with a time of 23.64 securing him the bronze medal.

After an amazing second day of competition, we are heading into tomorrow’s prelims session with the United States leading the medal count with a total of 50 medals and Australia in second with 37 medals.  Thanks for tuning into Day 2 of competition and please join us again on swimswam.com and on Twitter following @malloryweggeman for live updates tomorrow.