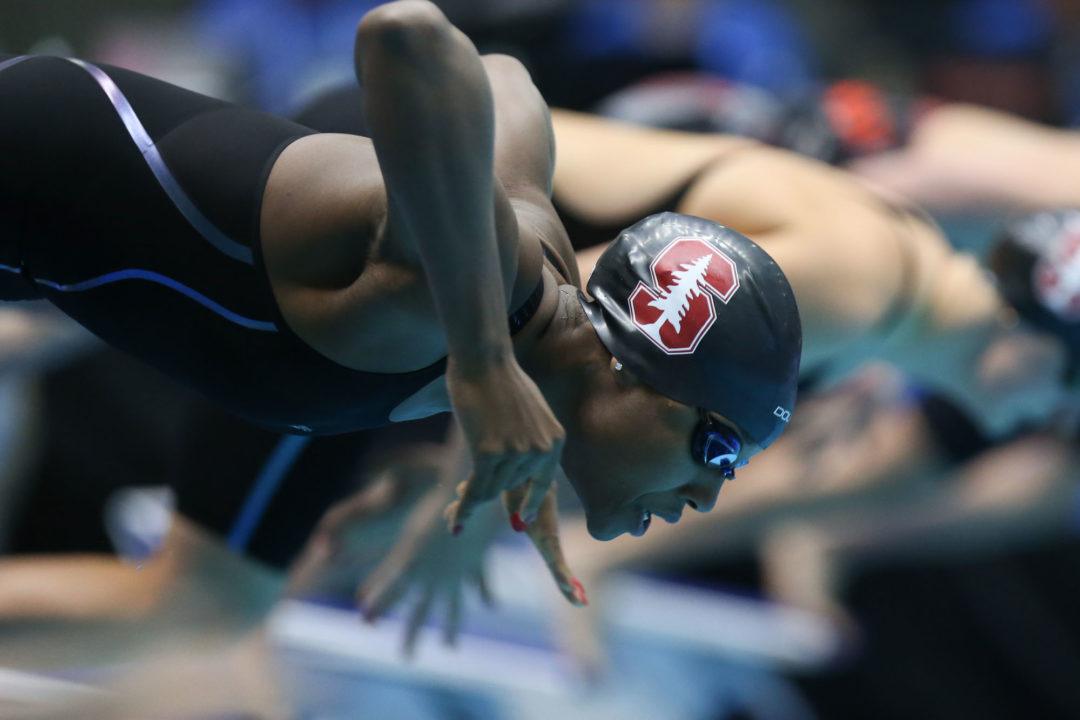 The Pac-12 named the recipients of the 2017 Women’s Swimming and Diving awards today, as voted on by the league... Current photo via Tim Binning/TheSwimPictures.com

SWIMMER OF THE YEAR – Simone Manuel, Stanford – 2016 Olympic gold medalist Simone Manuel takes home the  Women’s Swimmer of the Year, marking the second consecutive season the honor has gone to a Cardinal after teammate Ella Eastin took the honor last season. The junior, and 2015 Pac-12 Freshman of the Year, swept all six of her events at the Pac-12 Championships and lead the Cardinal to its ninth NCAA women’s swimming title and 10th overall. Individually, Manuel went two-for-two in record-breaking swims at NCAAs becoming the first woman under 46 seconds in the 100 free, stopping the clock with time of a 45.56 in the 100 and set a new NCAA record of a 21.17 in the 50. The Cardinal relay team of Manuel, Ella Eastin and fellow Olympians Katie Ledecky and Lia Neal captured an American Record in the 800 free relay on night one and closed out the met with another American Record in the 400 free relay on the final night.

SWIMMING FRESHMAN/NEWCOMER OF THE YEAR – Katie Ledecky, Stanford – World Record holder and six-time Olympic medalist Ledecky adds to her list of accolades as the Pac-12 Freshman/Newcomer of the Year after being named swimmer of the meet at the 2017 Pac-12 Championships and claiming three individual titles at the NCAA Championships. In Federal Way, Ledecky touched first in the 500 free and 400 IM. At her first NCAA Championships, Ledecky earned three individual titles and two relay titles. The multiple Olympic gold medalist broke her own American Record in the 500 free (4:24.06) and tied for first with a new pool record in the 200 free (1:40.36) to lead the Cardinal to its first NCAA Championship since 1998. Ledecky is the third straight Cardinal to garner the Freshman/Newcomer of the Year accolade.

SWIMMING COACH OF THE YEAR – Greg Meehan, Stanford – Meehan has been named the Pac-12 Women’s Swimming Coach of the Year for the second-consecutive year and third time in three years after guiding the Cardinal to its first women’s swimming and diving national title since 1998. Meehan lead a Stanford squad that had 13 different All-Americans combine for 47 All-America honors, seven individual national championships and three relay titles during the 2017 NCAA Championships. Stanford claimed 10 national titles and garnered 526.5 points, the most for the program since the Cardinal totaled 649.5 in 1993. At the 2017 Pac-12 Championships, the Cardinal swept multiple events and topped the podium in all four relays as well as the 50, 100, 200, 500 and 1650 freestyle, the 200 and 400 IM, the 100 backstroke, and the 200 fly. Meehan was also named NCAA Swimming Coach of the Year after also taking the honor in 2014. It is the seventh honor for a Stanford coach.

DIVER OF THE YEAR – Maria Polyakova, UCLA – Junior Maria Polyakova has been named the Pac-12 Women’s Diver of the Year after reaching the podium in all three diving events at the Pac-12 Championships and posting two top-five finishes at the NCAA Championships. The 2016 Diving Newcomer of the Year placed third in the 1-meter at NCAAs with a score of 325.80 and fifth in the 3-meter with a score of 351.80. Earlier in February Polyakova was named diver of the month for her two top-3 finishes in UCLA’s meet at USC. She becomes the first Bruin since Kristin Walls in 1994 to take home the honor.

DIVING FRESHMAN/NEWCOMER OF THE YEAR – Haley Farnsworth, Stanford – Farnsworth becomes the fourth Cardinal to win the freshman/newcomer of the year honor after she finished fourth on the 1-meter, sixth on the 3-meter and 12th on platform at the Pac-12 Championships. She qualified for the NCAA Championships with a 16th place finish on platform at the zone championships with a score of 431.70. The freshman also won the 3-meter in two dual meets this season as the Cardinal capped a second straight undefeated season.

DIVING COACH OF THE YEAR – Tom Stebbins, UCLA – Stebbins led divers Polyakova and Eloise Belanger to two different diver of the month honors this season capping off with Polyakova’s three podium finishes at the Pac-12 Championships. Sophomore Eloise Belanger, the 2016 Pac-12 Diving Newcomer/Freshman of the Year, won three diving events during the month of December to take the monthly honors. Senior Annika Lenz took the podium in the 3-meter finishing third with a 330.90 to earn points for the Bruins at the Pac-12 Championships. Polyakova earned UCLA’s first Diver of the Meet award at Pac-12 Championships to the the the monthly award for February. At the NCAA Championships Polyakova posted two top-five finishes. Stebbins becomes the first Bruin head coach since 1996 to take the Pac-12 Women’s Diving Coach of the Year honor.

Whenever the word ‘freshman’ is used referring to Katie Ledecky it has inevitably a negative connotation. She has been being “The Ace In SWIMMING ” for five years already.
Freshman of the year award – sure, very honorable . What are those guys in committees were thinking about. Just skip this award this year. I don’t know how was it taken by Katie, but I would get offended by such reward should I be Katie. But I’m not Katie and leave it to her to deal with such idiocy that does happen in life. That will definitely enrich her so called “college experience”. But because I’m not her I’m giving her free advice: get out from this place as… Read more »

Cool it. I feel like Katie is mature enough to share the spotlight, and Simone has definitely done some amazing things this year that deserve to be celebrated – not only as an individual swimmer, but also as a relay member, leader and role model. If anything, one of the major benefits of college swimming for Katie seems to be that she’s able to be part of a team, and not always a lone star. She already knows she’s great, she doesn’t need the PAC-12 to tell her that, and it doesn’t mean she’s underappreciated.

I’m not talking about Ledecky being underappreciated or who has to receive those Pac-12 rewards. I don’t think leading swimmers are caring much about such level of recognition.
But think why don’t we have “best junior” or “best sophomore” rewards but do have “best freshman” one. If you can answer this question then you will probably understand why I think that such kind of reward isn’t applicable by its nature in Katie Ledecky’s case.

One day someone will explain me what actually stands behind such nicely put phrase:”one of the major benefits of college swimming for Katie seems to be that she’s able to be part of a team”. So I will be on the same page with many other people who worship this “team experience”. It looks like have missed something in my life. And I have been on many teams in different roles: both leader and outsider.