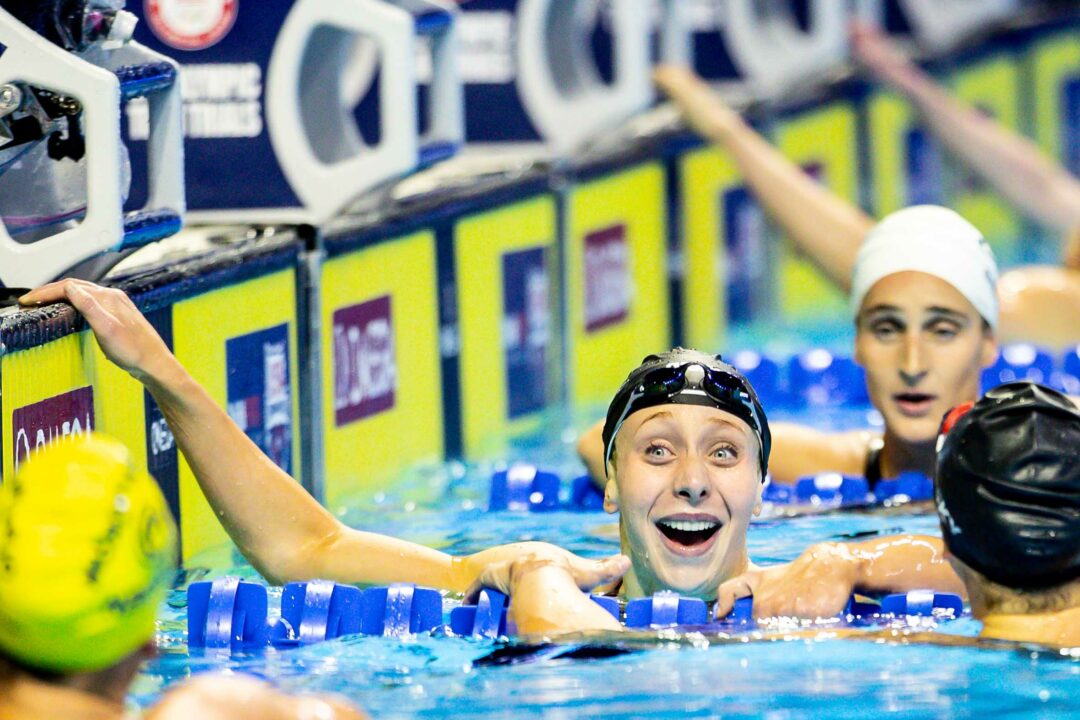 Between her strong performances and a slew of key scratches this morning, Paige Madden is looking more & more locked in as 4x200 free relay leg for Team USA.  Archive photo via Jack Spitser/Spitser Photography

Join us for our daily dose of overreactions from today’s prelims session of U.S. Olympic Trials:

Harting On Pace For Blowup?

Without Michael Phelps in the field, today’s 200 fly heats were very different. They were… faster???

Harting competed in those 2016 Trials, and needed to go just 1:57.9 out of heats to qualify 11th. The then-18-year-old Harting made headlines (and fans) at those Trials by wearing a Batman onesie during the walk-out for the 200 fly final.

That year, Harting held his speed extremely well between rounds. He dropped a full second from heats to semifinals, going 1:56.9, then dropped another 0.07 seconds in the final for another 1:56.9. If we’re going to overreact (and what else are we going to do in this post?), history would suggest Harting is on pace to shatter his career-best and break into the 1:54s tonight and/or tomorrow night.

Virginia’s Paige Madden went 3-for-3 in individual NCAA titles this year. And the 22-year-old is having a banner Olympic Trials so far, likely booking her first Olympic berth with a second-place finish in last night’s 400 free.

Between her strong performance last night, a 4th-place showing in 200 free heats this morning, and a slew of key scratches in the 200 (more on that below), Madden is looking more and more locked in as 4×200 free relay leg for Team USA.

There’s a clear-cut divide between that group and a bunch of age groupers sitting right behind them heading into semis: Erin Gemmell (16), Bella Sims (16), Claire Tuggle (16), Torri Huske (18), Kayla Wilson (17) and Cavan Gormsen (16).

Manuel was one of those notable scratches out of the 200. For overreacting purposes, her scratch mostly just means we can’t overreact yet. The 24-year-old Manuel was the #3 seed into the 200 free, and felt almost like a lock for one of the top 6 spots.

But Manuel probably isn’t an individual medal contender at the Olympics in the 200 free without a serious drop. She is, however, the favorite in the 50 free and 100 free after winning Worlds golds in 2019. Manuel’s 200 free scratch suggests she’s going all-in on speed – meaning we might see a new level of speed from her in the 50/100 frees later this week and later this summer.

On the flip side, she’s also got some young challengers in the sprint freestyles. With Torri Huske and Claire Curzan swimming as well as they are (they both knocked off 2016 Olympian Kelsi Dahlia in the 100 fly), Manuel might be hedging against any sort of similar youth movement in the freestyles.

Conger Squeaks By In 200 Fly

2016 Olympian Jack Conger scratched out of the 200 free, the event that earned him his Olympic status in ’16. The idea was that he’d be focusing in on butterfly – but this morning’s 200 fly was a struggle. Conger did go a season-best at 1:58.37, but was well off his career-best of 1:54.4 from the summer of 2017. Conger snuck into the semifinals in 16th, but already sits three full seconds behind the top qualifier.

Conger’s best shot at a return Olympic appearance has always been the 100 fly. (He also bowed out of the 100 free individually). But he’ll need a big improvement from his results this morning to contend with a fly field that only appears to be getting tougher as Michael Andrew swims faster and faster this week.

Foster Gearing Up For 200 Free Final

The gambit makes total sense. Foster wasn’t a major 200 fly contender, coming in with the 27th seed pre-meet. He’s one of eight men in tonight’s 200 free final, and Foster only has to beat two other finalists to book a likely Olympic berth as part of the 4×200 free relay.

Foster was the only one of those 8 A finalists with an event this morning, so his scratch levels the playing field some in terms of freshness.

One more Texas-related scratch with some intrigue: 20-year-old Coby Carrozza was the 43rd seed into the 200 fly. He scratched this morning, perhaps with an eye on an unorthodox Olympic berth in an event that’s already been swum. Carrozza is one of the eight U.S. men with a second chance to hit the FINA A standard in the 400 free. Carrozza finished 10th in heats of that race, dropping two seconds from his best time. USA Swimming has announced that Carrozza and the other seven men will be able to time trial the 400 again this week, and the highest-finishing swimmer from the original 400 free who hits an A cut will earn the second U.S. Olympic spot, currently unoccupied as no one made the Olympic qualifying cut.

Baker Off The Pace

Another notable veteran off the mark this morning was Kathleen Baker. The former 100 back world record-holder went out extremely fast in the 100 back semis last night, but fell off the pace and missed the final. She’s still an Olympic contender in the 200 IM and 200 back, but a foot injury she sustained a few weeks ago is clearly affecting her performances.

Baker was five seconds off her lifetime-best this morning in the 200 IM. She qualified 12th and will have another shot in tonight’s semifinals, but she’ll need a huge swim to put herself back into Olympic contention.

My kingdom for a female 200 meter freestyler.

How much gold do you have. Oh never mind Schmitt has it all.

Mark my words, Schmitt for the win.

8 times olympic medalist. She has what it takes.

How do you downvote a fact haha

Manuel isn’t a team player. She has plenty of time to rest for her main individual events. Sorry, but she could’ve put up a prelims swim in the morning to put her name in contention for the 800 relay. She will get a spot in Tokyo because her coach says so. This doesn’t sit right with me.

I’d clarify to say – she MIGHT get a spot in Tokyo based on how she swims the rest of this meet, along with her performance at the team training camp leading up to Tokyo compared to those selected for the 200 and everyone else who could be an asset to the team.

You know what the girls can do tonight and tomorrow, swim faster and take the decision away from the coaches. If not, put in the known faster swimmers for a medal or just settle for some purple participation ribbons

All these scratches really emphasize how great Phelps was. Swimming multiple races on a nightly basis during the Olympics with less than an hour of rest in between is absurd.

Phelps practiced competing a lot in the years leading up to his Olympics. Not quite like Hosszu, but he had the experience under his belt and that sure helped getting him thru those OLY schedules, which were relentless and grueling. Most of our swimmers haven’t competed at all in a year. It makes a difference.

Also an observation: seems like the swimmers who did well in the Skins races 2018/19 are doing better here: Fink comes to mind, but Andrews, Dressel (I’m assuming he will), King, etc.

Agreed. Add in that COVID really impacted training and racing opportunities. As fans we want more, but the swimmers shouldn’t be demanded to over stretch themselves simply to please fans.

Foster needs to come in 5th is one assumes Dressel will be on the 4×200 free relay, correct?

Not necessarily. They could use 7 guys at the Olympics if they want to put Dressel in finals. 3rd to 6th guys swim Olympic prelims, and then 1st + 2nd + Dressel + fastest in prelims swim finals.

It’s what they did with the 4×200 in 2016. Smith/Bentz/Conger/Lochte swam prelims, and they went with Dwyer + Haas + Phelps + Lochte (even though it debatably should’ve been Conger instead) for finals.

All depends on if they want to use Dressel there though.

Another swimmer I noticed this morning: Justina Kozan. Anyone know if something happened to her between Day 1 and today? She had a pretty disappointing 200Fr and 200IM after such a strong 400IM on Day 1. A 2:18 200IM especially seems bizarre after a 4:40 400IM.

I’m rooting hard for Katie McLaughlin tonight. It would be awesome to watch her swim in Tokyo.

Teri McKeever needs to get her going.

When it gets to this stage in the Olympic qualifiying process, I’m wondering how much influence a coach can have on their swimmer’s swims. Do they actually do anything or just provide moral support? Honest question.

Kathleen Baker has so much poise and inner strength to swim these trials with her injury. Much respect to her efforts this week. Big fan.