Opposite Coasts, Common Cause: Team Theo 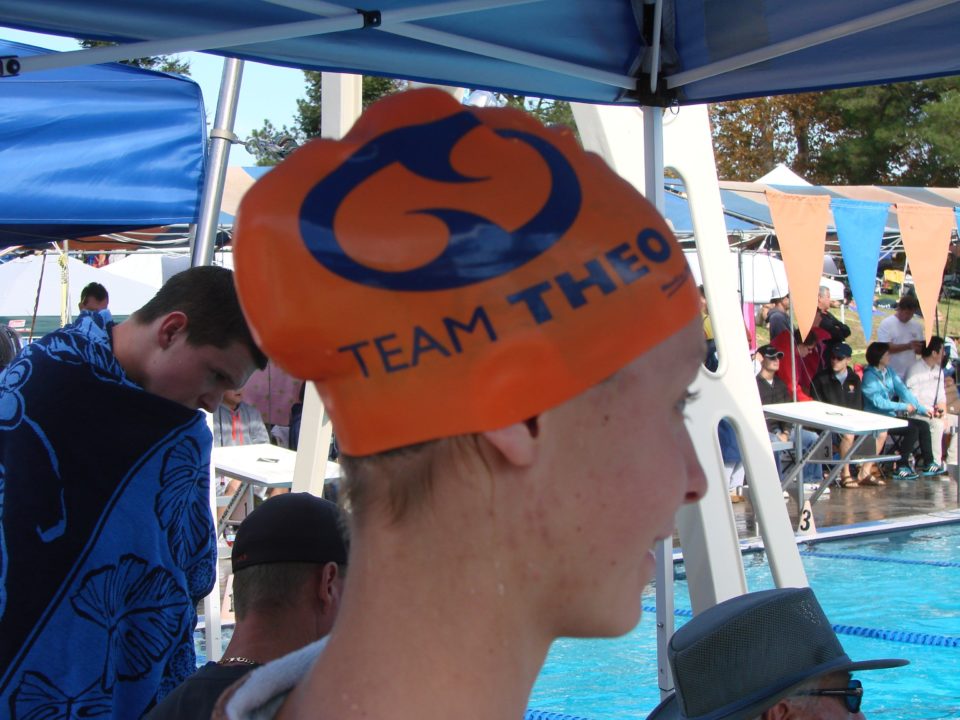 Early in September, SwimSwam reported the story of Theo St.Francis, the MIT swimmer who broke his C6 vertebra in a beach accident during freshman orientation, leaving him with no movement or feeling below his chest (Story here ).  Since that time, he has been working hard on his rehabilitation, while people on both sides of the country have mobilized to help and to support Theo.

On the East Coast…

…Theo continues to apply the swimmer’s work ethic and attitude he honed in the pools of Marin, making significant progress, impressing his doctors at the Spaulding Rehab Hospital in Boston with his effort and determination.  By the end of September, Theo’s discharge goal had been upgraded from “independence in a powered chair,” to “independence in a manual chair.”  In early October, Theo had begun aqua therapy, where in his first session, after an hour of sitting, staring into the deep, he asked if he could float on his back.  Imagine the courage it takes to totally immerse without having control of your limbs. But that’s Theo. By the end of October, Theo had taken to timing his laps in his manual chair around the rehabilitation center, continuously setting new personal bests.  By early November, Theo was able to articulate the fingers on his right hand enough to pick up and eat some almonds on his own.  Best almonds ever!

Last week, Theo completed the initial phase of his rehabilitation in Boston, and transferred to the Shepherd Center in Atlanta, where he can undertake even more intense therapy.  Before he left, the MIT Swimming and Diving Team hosted an event, “Relays for Theo.” The team presented Theo with one of their new caps for the season: Under the T of “MIT” is a small “THEO.” This year, all the MIT swimmers will compete with his name on their caps, in tribute. The ultimate goal is for Theo to return to MIT as a self-dependent student.

Meanwhile On the West Coast…

…there has been an orange invasion at swim meets around the San Francisco Bay.  The swimmers of North Bay Aquatics (NBA) sported bright orange “Team Theo” shirts and caps, both as a ‘ginger tribute’ to Theo and as a vehicle to raise funds.  Now they are a strong, visible, and growing presence.  Theo’s K-8 school, St. Francis Solano School in Sonoma, held a coin drive which will fund a month of active rehabilitation. Last month the team on which Theo swam as an age grouper, the Napa Valley Swim Team (NVST), collaborated with the team where Theo swam year round during high school, NBA, to dedicate the “Harvest Swim Classic 2013” to Theo.

This coming Sunday, November 24, the swimmers of NBA will join with the students of Theo’s high school, Marin Academy, for a Team Theo Run/Walk-a-thon.  As one of the event organizers, Madison Price-Judd (age 15), put it:  “We want to raise money for our friend and teammate Theo, but we also want to raise awareness about spinal cord injury.”  She went on to say: “We’re expecting about 500 walkers. There will be food, music, and lots of donations from local companies such as Three Twin’s Ice Cream, Hint Water, and Pete’s Coffee.”

If you would like to support a Run/Walker, or come out and show your support for Team Theo, the event flyer may be found here:

As you can imagine, the St. Francis family’s expenses are mounting. There are medical bills not covered by insurance, unexpected travel and other costs, and a home retrofit to be constructed. If you wish to send support directly, please contribute to the Theo Fund, set up by friends to help him and his family.

b) By credit or debit card: Please transfer funds via PayPal at http://www.paypal.com to the email account of Fund Co-Administrator Raymond St. Francis: [email protected]

(There’s no fee when you use the “transfer funds>send someone money” option in the PayPal menu, if you have linked your bank account to your PayPal account, or if you use your PayPal balance.  There is a flat fee of 2.9% when you use a debit or credit card.)

A volunteer organization, TeamTheo is neither a for-profit nor a non-profit.  Contributions are not tax-deductible to the giver but 100% of the contributions to Theo will go toward covering the expenses related to his care and rehabilitation that are not covered by insurance.  Your support is greatly appreciated.