Swim fans are a rule-enforcing bunch. For evidence of that look at the comment section of the following topics: doping, para-swimming, breaststroke pullouts. Stock photo via Jack Spitser/Spitser Photography 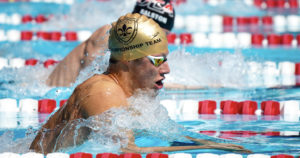 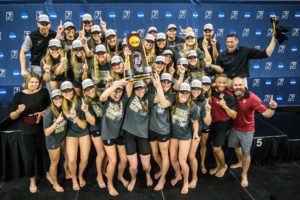 Swimming fans are a rule-enforcing bunch. For evidence of that, look no further than the comment section of a story dealing with any of the following topics: doping, intentional misrepresentation (IM) in para-swimming, underwater breaststroke pullouts.

But what about the blatant rules violation no one is talking about?

Pool currents are an established phenomenon. We’ve found the data to back up that claim at a wide range of events, from the 2016 Rio Olympic pool to the Windsor pool in Canada to several pools used on the Pro Swim Series, including Bloomington. (Skeptical? We’ll run through our data towards the end of this story.)

At a broad level, pool currents are more of a meet host issue. But at an individual level, coaches and swimmers have been taking advantage of inequality in lane assignments – often by ignoring or outright violating meet seeding rules.

At a meet in Arizona this month, a swimmer from the host club came in as the #1 seed in the timed final of the 50 free. But meet results show that she did not swim her event in heat 6 with the rest of the fastest-seeded swimmers. This swimmer competed in lane 1 of heat 3, replacing a swimmer who ultimately did not swim the event. We’ve asked the club why this seeding change was made, but have not yet received a response.

Many fans and parents, though, have an explanation: with at least one local coach noting that the pool in question has a “well-known” current, some say the host club moved their swimmer to a lane that would be aided by the current in a 50-meter swim – current-chasing, if you will.

The swimmer in question did indeed drop time – more than half a second – and made an Olympic Trials qualifying time. Sources say the club was given a formal warning from the Arizona Swimming LSC for violating the meet’s seeding rules.

What Can Be Done?

That example of a current is far from an outlier. Pool currents – or at least rumors of them – are a fact of life. And many coaches are willing to play with seeding rules to put their athletes in the most advantageous position.

Some might not see the problem here. A coach found a way to put an athlete into position to succeed. The athlete achieved what for many is a career-defining accomplishment. Maybe both should be commended. Where is the victim in all this?

The fact is, shuffling an athlete’s heat and lane to take advantage of a pool current violates USA Swimming rules on meet seeding. It also gives one athlete an unfair advantage over the rest of the field. Not only that, but it gives that athlete an advantage over the hundreds of other swimmers trying desperately to achieve that same Olympic Trials cut.

It’s not a rules violation we’re used to watching out for. But it’s one that is happening across the country. Coaches and meet organizers have to be on guard to prevent current-chasing.

That’s only a solution at the individual level. On a much larger scale, the problem of pool currents is by itself creating inequality in swimming’s playing field, even without intentional rule-bending by anyone involved.

A brief aside: here’s how we’ve tracked pool currents in the past.

Pool currents usually form in a circular pattern, ringing around the outside of the tub. That means that middle lanes are often less affected. But in far outside lanes, a circular current means that in one direction, a swimmer is aided by the current, while the current fights them in the other direction.

We typically track this phenomenon in two ways. First, we compare splits in long-distance races. Take an 800 free. If swimmers in lanes 1 and 2 are consistently swimming faster in one direction than they are in the other, we start to get evidence of a current. If swimmers in lanes 7 and 8 have the exact opposite pattern, the data gets stronger. The most convincing data is when we track prelims/finals meets to find the same swimmer showing vastly different splitting when swimming in lane 1 for prelims and lane 4 for finals, or vice versa.

In distance races, the true inequality of the pool is fairly negligible. Swimmers in the inside lanes may get an advantage of a few tenths of a second compared to swimmers on the outside who are expending more energy to fight a current half of the race. But in races of that length, the issue isn’t exactly pressing. In single-length 50-meter races, though, the advantage can be game-breaking.

Our second testing method is to compare swimmers in 50-meter events between prelims and finals, tracking how times change when the same athlete competes in different lanes. The data shows that the same athlete frequently swims faster as they move closer to one side of the pool between prelims and finals. In those sprints, a pool current can create an advantage of a few tenths of a second – a huge margin in a sprint. In fact, the Washington Post ran a story in 2016 with data suggesting that a pool current could have affected the Olympic medalists in the Rio 50 freestyles.

In a sport where hundredths of a second can make the difference between a legend and a footnote, this matters.

What can be done about the broader issue of pool currents?

#1: Authorities must stop outright denying that pool currents exist, and work on solutions.

When SwimSwam and The Washington Post reported on a pool current during the 2016 Rio Olympics, FINA’s response was to claim that those reports were “exclusively made on the basis of mathematical analysis, without taking into account any scientific evidence in the actual pool constructed for these games.” It’s unclear what kind of “scientific evidence” FINA wanted, but we’re fully in favor of more experiments on actual pools to test currents, with an emphasis on fixing them.

During the 2016 scandal, Olympic pool-builders Myrtha Pools shared video of their testing process, which used buoys to check the pool for currents before and during the meet. However, data still suggests that a current existed, bringing about the need for other methods of testing. The buoys were at the surface of the water, causing some to suspect that currents are more hidden beneath the surface. Others theorized that the currents kicked up when athletes were in the water, prompting the need for another testing method, perhaps one that could check the pool during races, in addition to the calm-water tests before meets.

There is absolutely a current in lanes 7&8 of the pool in Richmond (it was the OT pool in 2008(?) i believe). They deny it, but I can tell you it absolutely exists. It you ever have the chance to swim in it (LCM) pop over to those lanes and streamline on your back and just sit there and you be the judge.

I swim in that pool multiple times a week but have never noticed. Is it on the far side from the stands? Admittedly, I don’t swim on that side regularly, so I’ll try to check it out. At the Pro Swim Series, I didn’t notice a difference in results, but I wasn’t looking for it.

Yes, it’s on the side away from the stands. Looking at the pool from the stands, it’s about 15-20 meters out from the left bulkhead where I could always feel a current.

Currents during meets aren’t real, just as FINA says. They’re just statistical anomalies that keep happening, over and over, at the same pools.

I seem to always swim in pools where the current is always against me in both directions!