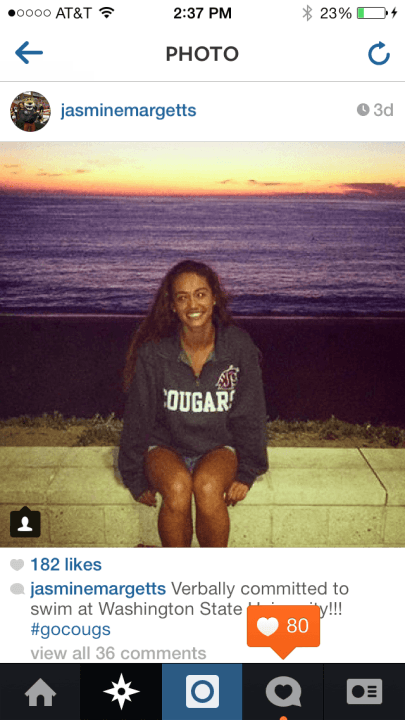 The Washington State Cougars have received a verbal commitment from the highly versatile Jasmine Margetts, who will join their roster next fall. Current photo via Jasmine Margetts

Jasmine Margetts, a senior at North Torrance High School in Torrance, California, has verbally committed to swim for Washington State University, for the 2015-2016 season.

A Few Of Her Best Times

She’s Had Her Best Season Yet

Margetts will have an immediate impact on the Cougars. As a freshman, she would most likely score at the Pac 12 Championships in the 200 I.M. (B Final), 400 I.M. (B Final), and 200 Fly (B Final), especially if she can carry her long course form over to short course. Washington State may also need her in the 200 and 400 Medley Relay, as a back or fly option. Margetts is also versatile enough, with further development at WSU, to placed in the 800 Freestyle Relay, although she has not focused much on the 200 Free for the past few years. At the rate she is improving, Margetts could be on a whole new level, by the time she arrives in Pullman.