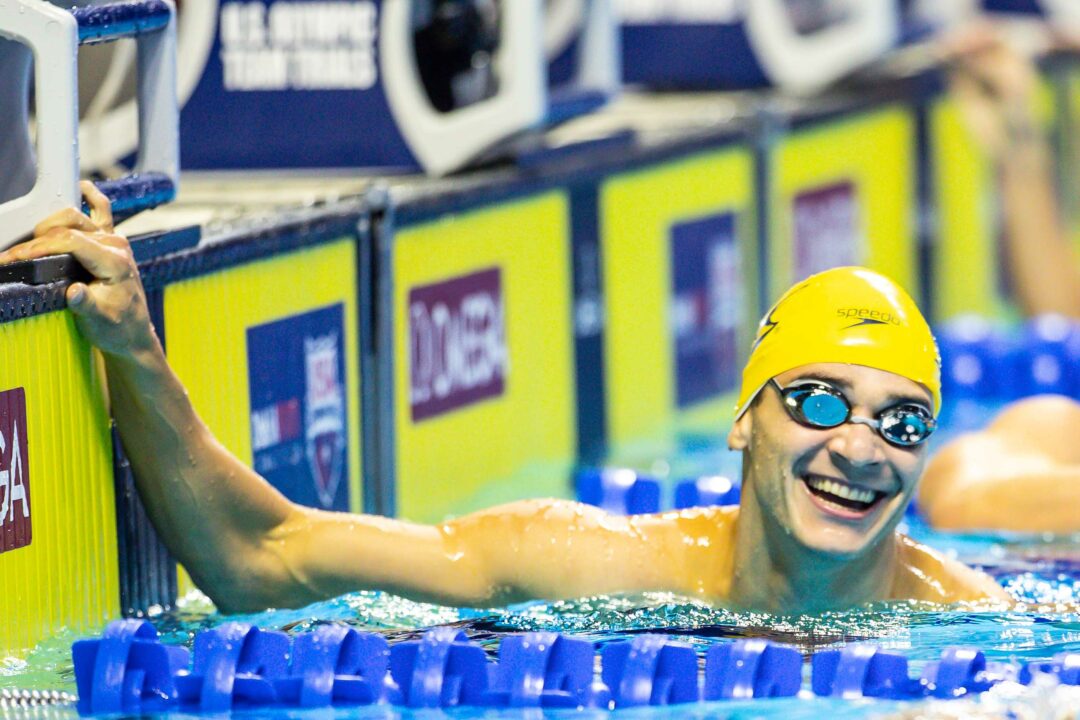 Mefford, who was fourth in the men's 200 back at the Tokyo Olympic Games, will provide a huge boost to Cal's NCAA title hopes in March. Archive photo via Jack Spitser/Spitser Photography

Tokyo Olympic finalist and 11-time CSCAA All-American Bryce Mefford has officially joined the Cal men’s swimming & diving roster for the 2021-22 season, a spokesperson for the team confirmed to SwimSwam on Wednesday.

Mefford joins the team as a fifth-year senior, utilizing the extra season of eligibility granted to student-athletes as a result of the COVID-19 pandemic, and bolsters the loaded Golden Bears team as they prepare for the Pac-12 Championships in February and the NCAA Championships in March.

The Bears, who won the 2019 NCAA team championship title and then remained the reigning champions for an extra year after the 2020 meet was canceled, finished second in 2021 to the University of Texas, 27 points back of the Longhorns (595-568).

After completing his senior year, Mefford had a breakout performance in the long course pool at the U.S. Olympic Trials, qualifying for the Olympic team after placing second in the men’s 200 back final behind Ryan Murphy, hitting a monster best time of 1:54.79. He also rattled off three sub-53 swims in the 100 back, placing fourth in the final.

In Tokyo, Mefford finished fourth in the 200 back, recording the second-fastest swim of his career in the final (1:55.49).

Since the Games, Mefford’s only swim on record is a singular SCY 50 back (23.30) from Cal’s dual with Virginia in October, but he has been training with the team all season.

With Texas coming in as the favorites to repeat as NCAA champions in 2022, Mefford will provide a huge boost to Cal’s hopes of reclaiming the title. And with last season’s national champ in all three of his events, Shaine Casas, turning pro, Mefford projects to be in title contention in the 200 back and a likely top-eight finisher in the 100 back and 200 IM.

Currently, Cal holds the top-two spots in the nation this season in the 200 back, with sophomore Destin Lasco (1:39.24) ranked first and fellow fifth-year senior Daniel Carr (1:40.09) in second.

There’s David Marsh, up to his old tricks!

If Cal can somehow lull Gordon Wheeler out of retirement then they will have NCAAs locked down.

Cal adding Medford and Texas losing windle makes things a whole lot closer. I know right now all the attention is on Texas but they’ve got a very good top end. Gonzalez, Mefford, Carr, lasco, seeliger, whitley, Julian, grieshop should all be fighting for a top 3 in at least one event and an a final in multiple. Just need some depth guys to compliment that and a freshman or two to step up like last year (though hard to expect anyone to breakout like lasco)

Somewhere lost in this is Liam Bell going 52 low in the 100 breast in a Speedo in the fall. He hasn’t really done anything since, but it wouldn’t shock me if he showed up to NCAAs in March and goes 50 high. He could also show up and go 53 mid. Kind of a wild card, but if he is in form, it’s bad news for the longhorns

As if this year’s NCAAs couldn’t be any more exciting….adding another stellar athlete to the mix only makes it all that much more intriguing. And, an Olympian, no less! Shaping up to be another incredible March to look forward to, for all teams, all athletes, and all fans! Good luck swimmers, stay safe and enjoy the rest of the season – sadly for the fans, it will be over in a splash!

I was hoping he would take his fifth year! Great news for Cal.