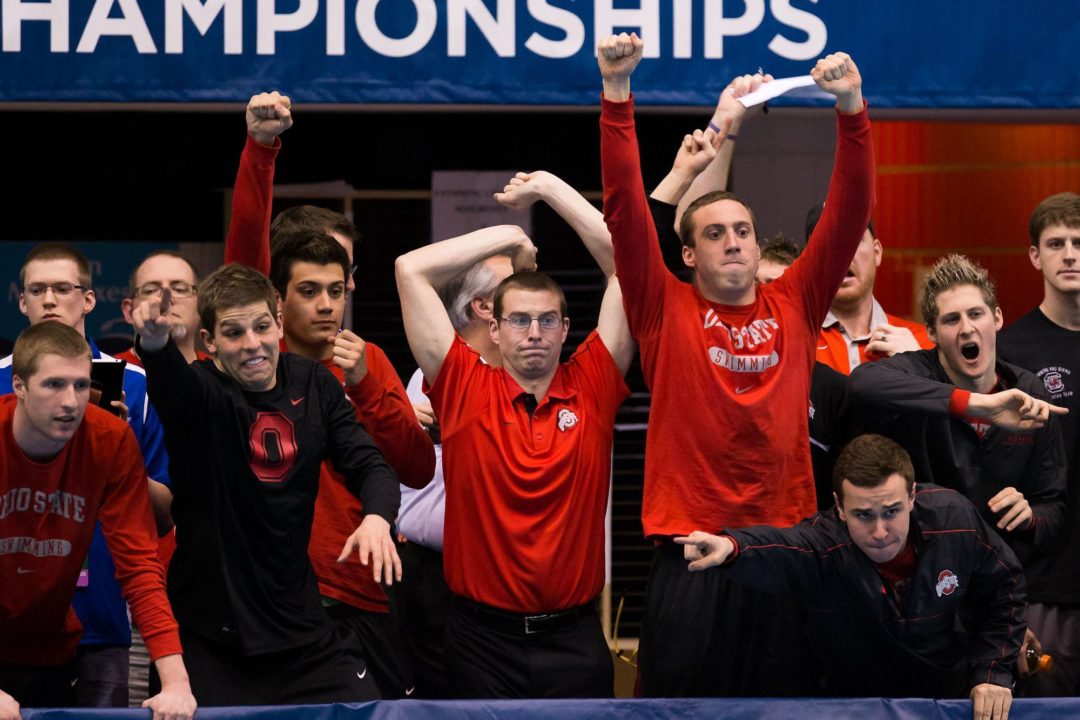 The Ohio State Buckeyes won't do much travelling outside of their local area in the 2014-2015 season. Archive photo via Tim Binning/TheSwimPictures.com

The season will start with the traditional intrasquad and alumni meets, and roll into four-straight events against some of the top teams within the Buckeyes’ home state. That includes co-ed duals with Cincinnati, Cleveland State, Division III power Kenyon, and a co-ed tri against the Ivy League’s Princeton and Division III’s Denison.

Next up, the annual Ohio State Invitational will come to town. That meet won’t have quite the same field as it has in past years based on the 5 committed teams so far, but should still be a quality event and a solid Big Ten preview. Ohio State has announce Purdue, Wisconsin, Kentucky, and Kenyon in town for that.

Then, a portion of the team will travel to Winter Nationals in Greensboro, North Carolina, before the whole team takes off after Christmas for winter training in Boca Raton.

After the break, the Buckeyes will make a return trip to Denison for a men’s only event. That will be followed with back-to-back road duals against Big Ten rivals Michigan State and Michigan on January 23rd and 24th.

Then it will be back home for the remainder of the regular season, with hosting duties for the Big 12’s West Virginia; a one-day tri meet against border rivals Louisville and Indiana; hosting yet another in-state competitor Wright State; and hosting the two-day Ohio State Winter Invite.

The Louisville-Indiana meet should be a fun one, as Ohio State didn’t see either of those teams in the regular season last year. That’s a meet that can build some excitement with out-of-state regional opponents without anybody having to travel too far.

This year’s Big Ten Championships will be in Iowa City, as will the men’s NCAA Championships, with a home Last Chance Meet sandwiched in between.

This is a pretty classic Ohio State schedule that we’ve seen for the last few years under Bill Wadley, with a lot of close meets. The most striking difference is the limited number of meets against Big Ten opponents, as it appears the conference is moving away from their quad-meet system. The Buckeye men this year will only race 5 of a possible 9 Big Ten opponents in the regular season this year, and two of those are only as entrants in the Ohio State Invite.

OSU – you don’t have to like them, you might want to beat them, but it is always wise to respect them.

I respect that program for one reason and one reason only – Bill Wadley. He is a class act and has done a great job there over the years!