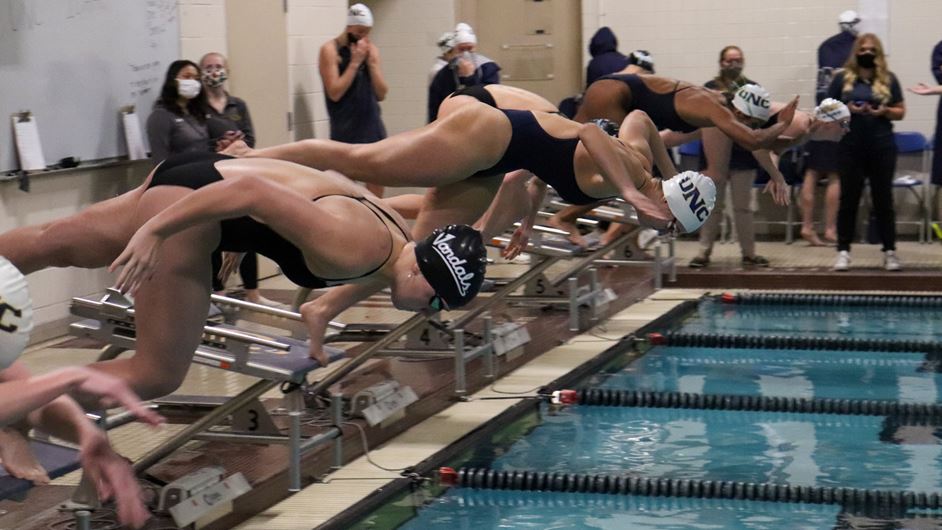 Austin wasn’t quite done picking up w’s just yet. The senior out of Arvada, Colorado led a sweeping effort of the 200 fly with a 2:08.87, while teammates Nunez Blazquez and Emina Pasukan hit the wall right behind Austin.

No dual would be complete without Madelyn Moore sweeping the sprints. Her time of 23.36 in the 50 free was .01 off her best time of the year thus far. Moore also swam a 51.65 in the 100 free, outpacing fellow Bear Ali Jackson.

Swimming in her first meet of the season, Saana Liikonen nearly caught Moore in the 50 free with a 23.65.

Paul Nunez Blazquez’s busy day didn’t go unnoticed. While the Spaniard helped win the opening relay and dialed up a solid swim in the 200 fly, she saved her best effort for the 200 back, hitting the wall at 2:08.88 to earn the win.

Freshman diver Angeline Settle got a taste of diving in front of a home crowd. Settle scored 188.63 in the 1 meter and a career-best 207.53 in the 3 meter.

Northern Colorado made sure to put on a show to end Saturday afternoon in the 400 free relay. Both the A and B teams raced neck-and-neck throughout the four legs. In the end, it was the team of Doris Pusztay, AJ Popp, Anna Austin and Madelyn Moore who hit the wall first at 3:34.95. The win also solidified the Bears’ dual win over Idaho, 207-91.

DECK TALK
Head coach, Lisa Ebeling
“I was really proud of our team today. There was a lot of tough racing and we are starting to see some of the fine-tuning we’ve been working on in practice show up in races. It was a fun day for us and an all-around great team effort to go 1-2 in both of our relays.!”

WHAT’S AHEAD
Northern Colorado earns another week off before heading north to face rival Wyoming on November 4.

Saturday’s meet was the Western Athletic Conference opener for Idaho, ending in a 91-207 loss to a strong Northern Colorado team. The Bears improved to 8-1 overall on the season.

UNC jumped out to an early lead, winning the first seven events of the day. But the Vandal diving squad went 1-2-3 in the 1-Meter Dive to collect 16 points for the Silver & Gold. Freshman Heather Hopkins again led the Vandal divers with a score of 257.63, followed by Emily Mack (243.00) and Allison Shimp (219.45).

Later in the meet, Hopkins, Mack, and Shimp also took the top-three spots in the 3-meter dive, collecting another 16 points for Idaho.

Freshman Laura Rodriguez-Fernandez continued to impress by taking second-place in the 200-yd Breaststroke, posting a time of 2:28.51. Fellow freshman Caitlin Smith battled from behind to finish second in the 100-yd Butterfly with a time of 1:01.09.

Up next, the Vandals will have a week off before heading to Seattle for a WAC dual with Seattle University on Saturday, November 6th.