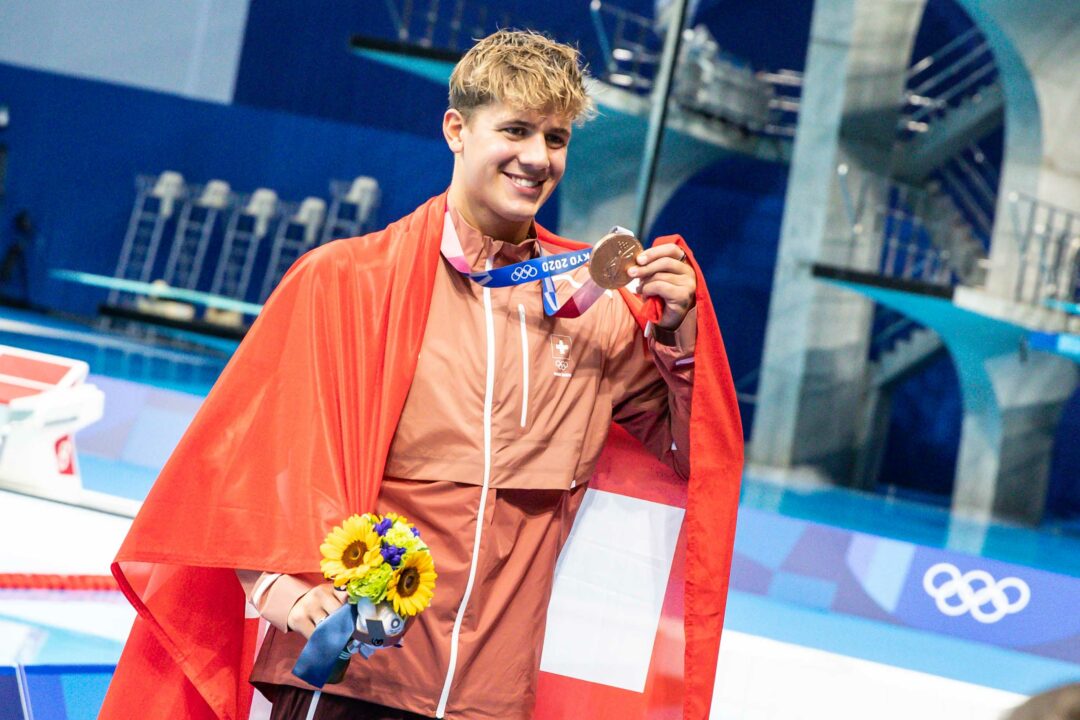 Ponti reset the Swiss national records in all 3 men's short course butterfly events over the weekend, along with the 200 IM. Archive photo via Jack Spitser/Spitser Photography

Swiss Olympic medalist Noè Ponti had a busy weekend at the 2021 Short Course Swiss Championships, resetting the national records in a total of 4 events: the 50, 100, and 200 butterflies and the 200 IM.

Most noticeably, Ponti shaved more than 2 seconds off Desplanches’ former mark in the 200 butterfly, becoming the first Swiss man to ever get under 1:53 and 1:52 in the event. The swim got Ponti within two seconds of the European record in the event of 1:49.00, which is held by László Cseh at a 1:49.00 from 2015.

Ponti’s short course success comes after a big summer for the Swiss butterflier who swam his way to Olympic bronze in the men’s 100 butterfly. He placed third in Tokyo to the USA’s Caeleb Dressel and Hungary’s Kristof Milak who won gold and silver, respectively. His Olympic bronze marked just the second major international medal of his career, following his 50 butterfly gold at the 2019 European Junior Championships.

After his Olympic berth, Ponti made the trip to the USA to begin his collegiate career at NC State, but shortly after decided to head back home, citing mental fatigue.

Looks like mental fatigue it is not an issue anymore. Will he return to NC State?

Dude one good meet is not indicative of how well someone’s doing mentally. If staying in Switzerland is working for him, then he has every reason to continue doing so until he feels ready to leave home.

The kid won an Olympic medal this summer. Give him a break! Let athletes thrive in environments that they feel most comfortably in. Nice swims Noe! Keep up the good work! Keep it going.

Dude’s got an Olympic medal. No offence, but staying in Switzerland doing his thing will probably better set him up for life than an NC State degree. And he keeps improving, so he he is doing it right from a sporting perspective.

Exactly, I know there were comments back when he announced that he was leaving NC state that people were hoping he’d return for the sake of NC state. It’s like let him do his thing college isn’t for everyone regardless of circumstances