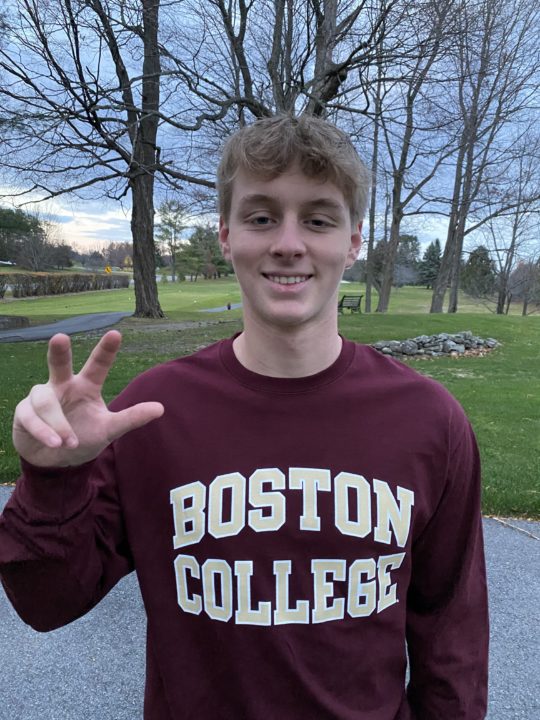 In March 2020, just before the pandemic shutdown, Henkel claimed the New York HS State title in the 100 fly, hitting a lifetime best of 49.43. Current photo via Bryce Henkel

Boston College has picked up a verbal commitment from Bryce Henkel of the Clifton Park-Halfmoon Piranhas in upstate New York. Henkel is a senior at the Albany Academy for Boys.

I am very thankful to announce my verbal commitment to swim and study at Boston College next fall. Huge thank you to my family, friends, coaches, and teammates for all the support over the years. Go Eagles!!🦅🦅🦅

Boston College just had a historical intrasquad meet to close out the fall semester, torching eight school records and putting a bunch of swims into their all-time top 10. Among the standout performers was freshman Kyle Floyd, who clocked lifetime bests of 48.27 in the 100 fly and 1:47.71 in the 200 fly, snapping BC program records in both.

Last season, Henkel would’ve been #2 in the 100 fly and #3 in the 200 free on BC’s roster. Henkel joins Andrew Blusiewicz, Kenneth Thien and Will McKinney at BC next fall.

Yaaasss! Swimming on the rise at The Heights and education already Elite. Congratulations on a huge decision.