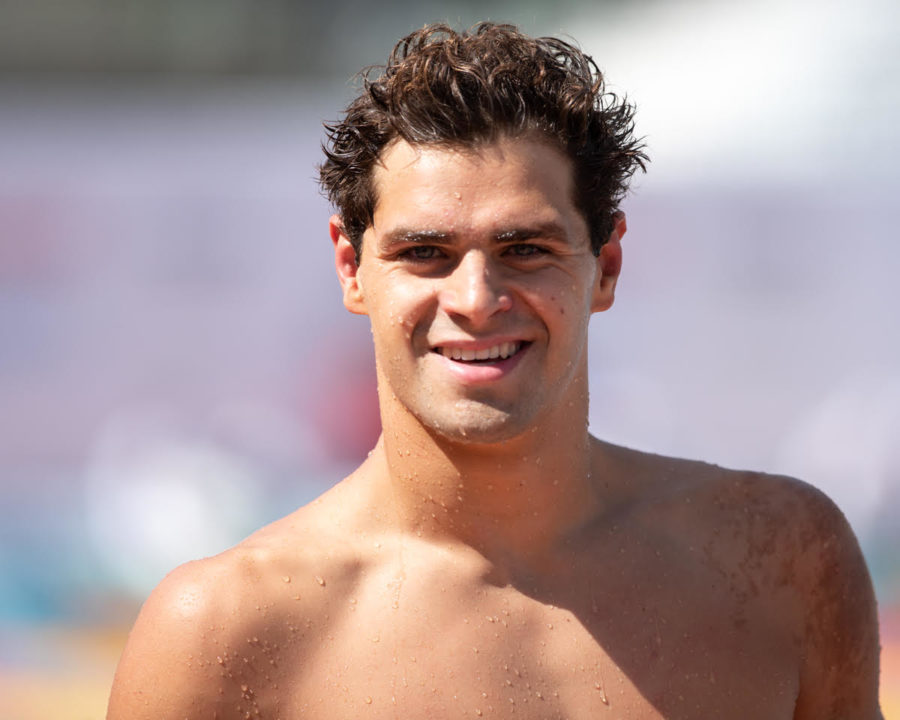 The New York Breakers have made a last-minute addition to their roster ahead of their ISL debut this weekend in Lewisville, Texas. Archive photo via “Rafael/Domeyko Photography”

The New York Breakers have announced their 28-swimmer roster for their upcoming debut in the International Swimming League (ISL) this weekend in Lewisville, Texas.

The Breakers, managed by Tina Andrew and coached by Peter Andrew, have one of the larger rosters in the league and one of the more internationally-diverse rosters. In addition to the US, the team has athletes from Canada, Denmark, Germany, Australia, South Africa, Brazil, Colombia, and Ecuador. In fact, in spite of being 1 of 4 US-based teams, only 8 of its 28 swimmers for the Lewisville meet are American.

Absent from the week 1 roster are British IMer Abbie Wood, who is part of a group attending the British National Team training camp in Arizona and are expected to miss the first two meets; as well as Russian backstroker Grigory Tarasevich, a late addition to the roster who is expected to join the team in Budapest.

The 28-swimmer roster also adds a new, previously-unannounced name to the team: Australia’s Abbey Harkin. Harkin, who presumably will play counter to Wood for the meets that the latter can’t attend, ranked 15th in the world last season in the 400 IM in 4:32.57: two slots behind Wood at 4:31.70. By our count, only 2 swimmers who ranked higher than Harkin are scheduled to be in Lewisville: Katinka Hosszu (#1) and Zsu Jakabos (#10), as the women’s IM races have been among the thinnest groups in the ISL’s first season.

Harkin is 21 and trains at St. Peters Western under Dean Boxall alongside stars like Ariarne Titmus. She was Australia’s National Champion in the 100 meter breaststroke in 2019, but finished 3rd at their Trials later in the summer. She made her international debut at the World Short Course Championships in 2018, where she finished 7th in the 200 IM (2:08.30) and 9th in the 400 IM.

The Breakers are led most prominently by Pernille Blume, the defending Olympic champion in the 50 free, and Michael Andrew, whose USRPT training style makes him a potential superstar in the rapid-paced ISL format.

Does this camp for the Brits only apply to specific clubs because Thomas is on the national team and training in the UK so i don’t see why she isn’t at the camp like Wood is.

Not really sure. It’s been hard to get anybody to definitely say who is/isn’t going to the camp and when they are/aren’t going to be there.

Really interested to see how MA does in this format.