New Video of 11-Year Old Phelps Uncovered; Check What He Does on the Blocks 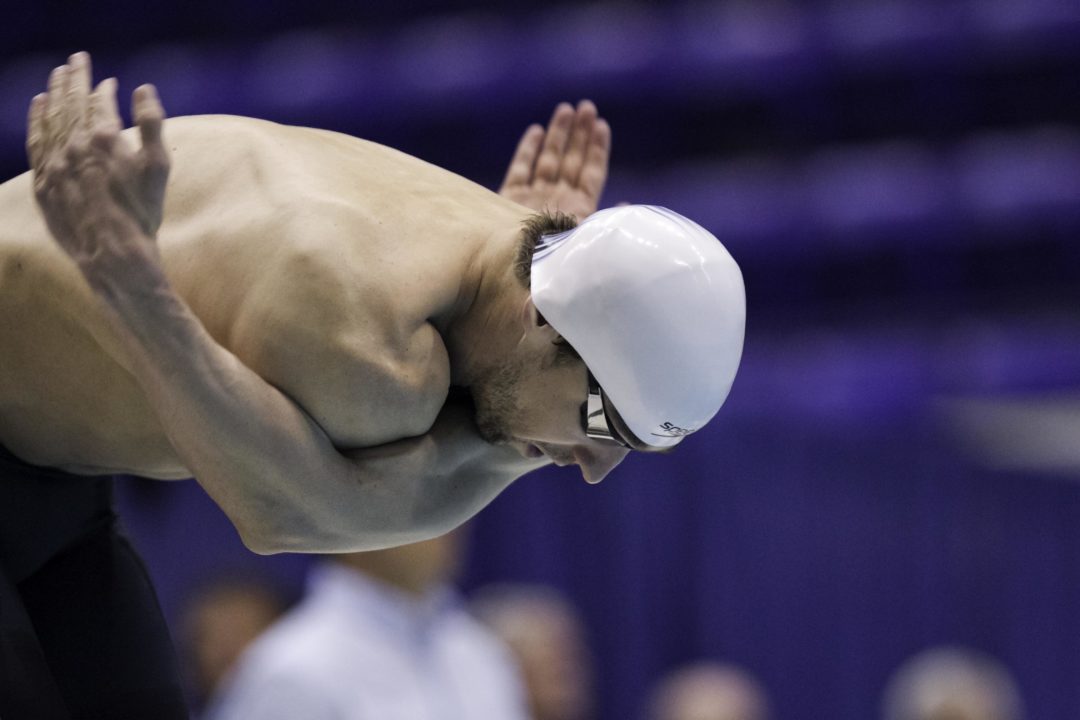 Before the beard, before the gold medals, Phelps was....pretty much the same. Only shorter. (Photo Courtesy: ©Tim Binning/TheSwimPictures.com)

We were just sent a great video by Jeff Cooper of a young Michael Phelps swimming a 50 butterfly. Not “16-years old, already an Olympian” young; more like “11-years old, just a NAG Record holder” Michael Phelps. The video (as you can see) is from February of 1997 at the Maryland All-Star Meet.

What’s great (and what Jeff showed in slow-mo) is that Phelps has had the same block routine, well, forever. I think that’s an important lesson for young swimmers to learn. While it’s important to be an athlete and to be flexible and adaptable, developing a pre-race routine is a good way to block out distractions and get focused.

We couldn’t find results for this meet anywhere, but by my hand-timing of the video, Phelps hit in about a 26.7 for the 50 yard race.

“We were at the meet, and my mom said ‘hey, let’s film the fast kid,” Cooper said of his rare footage. “She was a fan from early on!”

A few things have changed about Phelps’ stroke since then, but all of the basic components are clearly recognizable. Breathing nearly every stroke, the same wide entry that he’s always had; there’s no doubt that this is Phelps.

I love this video!

I wish Bob Bowman wrote a book about training such uber talent.

That quote from Cooper is fantastic.

Does anyone know whatever happened to all the film footage/documentaries that were produced before and during 2008? I remember reading how phelps and carlisle decided to embark on a joint venture to produce a swim community–all the while producing their own documentaries. I THINK the site was swimnetwork.com or something like that. I tried going to the site a few months ago and it seems like it’s no longer in operation. i’ve seen a few documentary clips on youtube–wish I could see the rest of the film footage. Anyone know where it is?

just youtube searched it–apparently swimnetwork.com was some endeavor MEL STEWART was involved with!! (as always, the best interviews!!). The one I talked about above is actually swimroom.com. The videos on youtube all say to go to swimroom.com to order the full documentary dvd. so what happened to the site?

Swimnetwork.com desapeared little after the Pan Pacs 2010 . Mel was commenting most of the races on that time … I still don’t know why that very good site stopped but i am sure Mel has the answer to that .

if you notice imediately following the start, the time on the left says something to the one on the right and points at phelps. i wonder if he was saying “see this little boy here, someday he’ll grow up to change this sport forever”? because that is exactly who this little boy grew up to be

Not so rare. I have video of 5 maybe 6 races of Phelps and I racing each other in the summer of 1995 at Far Westerns in Santa Clara. The one race I remember was my very first(and second, in finals) 100 meter butterfly. He was 9, I was 10, and if memory serves correctly, he won in around 1:10, and I was second at 1:15 or so. It has been roughly a decade since I viewed the tapes, but what was most striking was how fast he was and how terrible his strokes were. I mean terrible. The video posted above shows a marked improvement in technique. When I say terrible, I mean I have never seen worse stroke… Read more »

Would be great if you could share the videos 🙂

I’ll do my best. Believe they are in a storage locker in Palo Alto. Might just sell them to the media, or to that creepy guy in SoCal who we all get warned about who takes pictures of young boys in speedos from outside the fence at swim meets. Whoever offers more.

Kidding. Or am I?

Sh**** technique my a**. Phelps was awesomely using his lats/pecs/quads/hams/glutes/delts/traps in this race just like he always does. Sure he got cleaner as he grew older but the basics of POWER and streamlined SPEED are there hence he won…

Will SwimSwam be writing an article on WSJ Article on Missy Franklin and Cherry Creek High?

JW – we mentioned it here:

and discussed at length in this week’s Open Turn here: