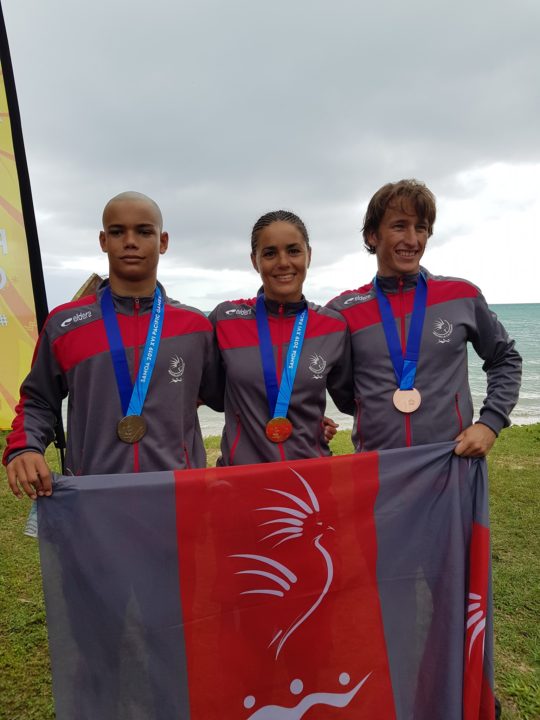 New Caledonia, the defending medal champions in swimming, got off to a big start in the water at the 2019 Pacific Games in Samoa.

Swimming at the 2019 Pacific Games

Pool and open water swimmers from 15 countries are scheduled to race this week at the 2019 Pacific Games. The multi-sport event, which takes place each year prior to the Summer Olympics, features all of the small island nations from around the Pacific Ocean.

The first medals were handed out on Monday morning, when New Caledonia’s Charlotte Robin repeated as champion in the women’s open water event, which is 5km this year, up from 3km in the last edition.

The golden start for New Caledonia foretells a repeat of the 2015 event, where they won half (21 out of 42) medals in swimming. Tahiti, meanwhile, earns their first swimming medal since at least 2007 (records prior to 2011 get sketchy).

There will be some turnover in this year’s events; for example, Papua New Guinean swimmer Ryan Pini, a 4-time Olympian and Pacific Games legend, is not swimming this year, instead serving as deputy chair of the Pacific Games Council Athletes Commission. In 2015, he won 6 individual gold medals to go with 3 relay medals. Also absent from this year’s meet is Tonga’s Amini Fonua, who swept the breaststroke events (including Meet Records in the 50 and 100) last year.

On the women’s side, Lara Grangeon, who won 11 gold medals in 2015, will also be absent as she’s in Japan on training camp while preparing to represent France at the World Championships (New Caledonia is a special collectivity of France and its athletes represent France at most international competitions).