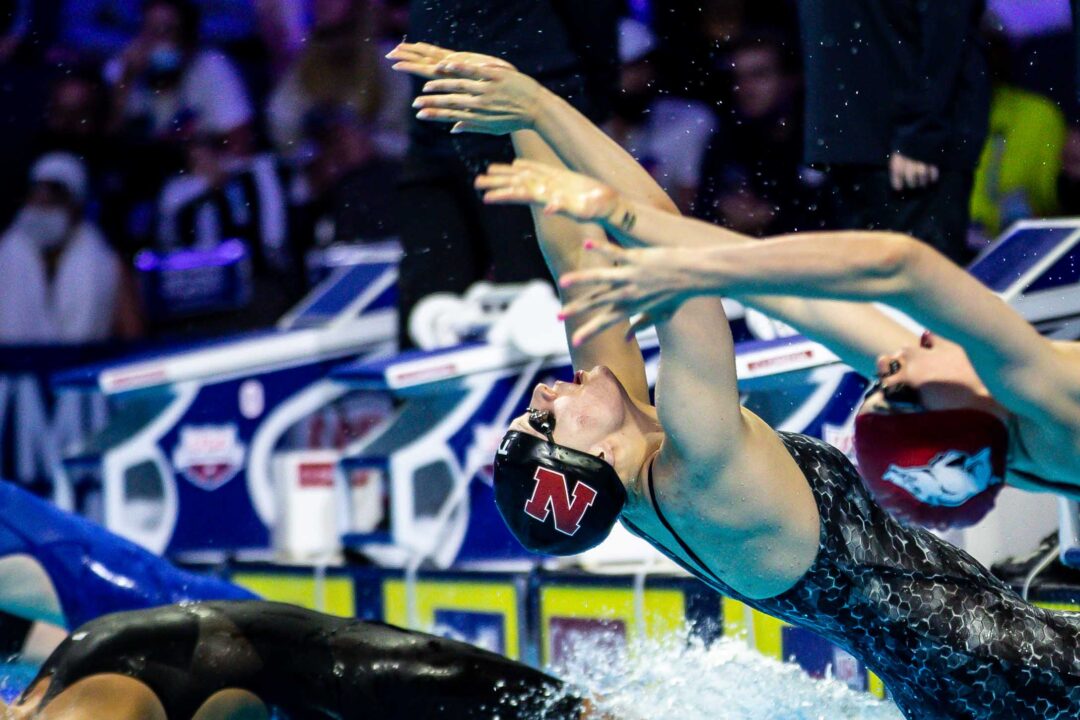 The University of Nebraska welcomed the Iowa Hawkeyes to Lincoln on Saturday, with the Cornhuskers coming out on top 193 to 59. The Iowa program has a very small roster for the 2021-22 season, with only 8 swimmers, though three of those swimmers did not make the trip to Lincoln for the meet. This left the Hawkeyes with only five swimmers and they were unable to enter a competitor in several events. Despite the lopsided score, Nebraska exhibitioned somewhat sparingly and in events where Iowa did not have competitors.

Nebraska was led by sophomore Alexa Kucera, who won both of her individual events on the day. The Hutchinson, Minnesota native started her day by splitting 24.94 on Nebraska’s 200 medley relay, where she teamed with Madesyn Ronquillio, Ella Stein and Jojo Randby to claim victory in 1:44.63, nearly four seconds ahead of Iowa. She then narrowly won the 50 free in 23.89, touching just ahead of All American teammate Autumn Haebig. In her final race of the day, Kucera won the 100 fly in 56.49. Those times are a bit faster than Kucera’s first meet this season, where she split 25.29 on the medley relay and led off the 200 free relay in 24.25.

The Hawkeyes’ lone victory on the day came on the boards, where senior Sam Tamborski won the 1-meter springboard with a score of 287.32. Tamborski, a two-time NCAA qualifier in the 3-meter, also finished 2nd in her signature event.

Iowa was unable to enter any competitors in the 1000 free, 200 fly and 50 free due to their roster shortages.

Nebraska next heads north on Friday to take on Minnesota in Minneapolis, while Iowa will have a few weeks off before splitting their squad and heading south on November 18-20th, as the divers head to Georgia Tech and the swimmers head to the University of Miami for a pair of invitationals.

This is what happens when an Athletic Director is out of control and incompetent.

Barta could literally do nothing and have better outcomes.