We’re a more than a month into the men’s NCAA season and nearly every championship relevant team has competed multiple... Current photo via Mike Lewis/Ola Vista Photography

We’re a more than a month into the men’s NCAA season and nearly every championship relevant team has competed multiple times. This means the top swimmers in the division have all put up times. With this early data, what can we tell about the state of the top end of the division?

The first thing I looked at was the top ten times in each event this year and each of the previous 7 years as of November 6th. They are slower this year than last almost across the board. This is the first year in the last 6 that has been true. The average of the top 10 times is on average .6% slower than at this point last season. At no point in the last 6 years has the top 10 average been any worse than .1% faster than the year before. The complete top 10 average time change data is in the table below.

The savior of this season is the mile which has been 1.5% faster than last year among top swimmers, but that is probably just a regression to the mean because the mile last year was much slower than the year before (1.6%). 10 of 13 individual events had a slower top 10 average than at this point last year.

Negative is faster. Positive is slower. 2019 is this season. 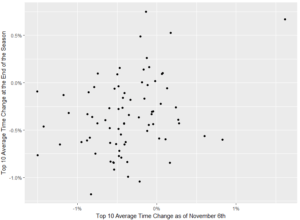 However, the fact that this year’s data is so different across the board than last year’s data may mean something. The only event in the past with over a 1% slow down this time of year, the mile last year, saw a 1.5% slow down at the end of the year.

The difference almost looks like a systemic departure from the past years. Only twice in the past 7 years was the top 10 average in an event more than .8% slower than the year before. This year, that’s true in 8 of 13 events. Last year’s senior class was exceptionally strong. Perhaps their absence is dragging down the average. However, individual swimmer departures would be more likely to affect some events more than others. This year’s slow down is pretty across the board.

On a swimmer by swimmer basis, for the most part, it seems like top teams have been performing pretty normally relative to themselves at this point last year. Maybe that means we’re in for a bit of a correction at the top after the explosive speed of last year’s NCAA championships. Or maybe the lack of correlation between these early season time changes and end of season improvement will continue.

In short: What does it mean going forward? I’m not sure. There isn’t a track record for the pattern we’ve seen so far to base our expectations on. This will be something to keep an eye on the rest of the way.

One way to check up on the current state of the team race is the current Swimulator simulation of the national meet. Swimulator takes the current top times done so far this season and simulates the national meet with legal and reasonable event line ups for swimmers (3 individual event limit, no consecutive events). Many teams are at different points in their training cycle so far, so team’s rankings mean different things for different teams. To help put the current rankings into context, I included the rankings from last year as of 11/6 and the final ranking last year.

Currently Cal sit first with 303.5 points, well ahead of their 250 at this point last year. They are trailed by the closely bunched group of Florida with 250, USC with 245.5, and Indiana with 245. These scores do not include diving

Top 10 Times Each Event as of November 6th

On the mile difference. At this point in the season the 1650 has not been offered in many meets. Out of the current top 10 times, 8 are out of two meets last weekend (representing 4 schools). A single other meet with some top distance guys last year offering a 1650 could have had a big impact on times at that point in the season.

Here’s one possible explanation: Perhaps the top teams are training harder earlier in the season this year and their swimmers are more broken down than last year. Last year Texas lost dual meets to Indiana, Florida, Texas A&M, and NC State and then won the NCAA Championships. Perhaps, more teams are minimizing dual meet results in favor of the NCAA Championships. I will be interested to see if the results and conclusions above still hold after the November/December Invitationals where most everyone rests so they can make NCAA cuts. If the times are still slower then I think the conclusions above are reasonable. Otherwise, it may only reflect a diminished emphasis on October dual meet results this season. P.S. I… Read more »

FORMER TEXAS LONGHORN – read this, which I think might be of interest to you: https://swimswam.com/ncaa-october-performance-who-is-faster-so-far/

All signs point to Texas being less broken down than last year, by admission, and by the data. So, that’s worth considering.

Also, just to clear the deck – Orange/White results weren’t officially submitted last year or this year (or included in this analysis, or the above October analysis).

Couple things. First, the Texas Orange White meet is not in the data from last year.
Second, Cal, Texas, USC and Florida’s returning swimmers have been much faster to this point than last year. Indiana has been about the same. Only NC State among top men’s teams has been noticeably slower to this point. See this article: https://swimswam.com/ncaa-october-performance-who-is-faster-so-far/

I read the referenced article which suggests my explanation may not be valid and yes it appears Texas is not as broken down as last year. Still, let’s see where the times are after the November/December Invitationals because I think then is a better time time for an analysis of whether NCAA swimmers are slower or faster than before. I just think mid December might be an excellent time to update this analysis for a new article. Great work, by the way!

Conspicuously missing from all these stats is the number of meets held during the respective reporting periods. When did these teams start their meet season, who was the competition, which members of their team swam their primary events, etc.? For a valid comparison, all this information, and more, needs to be made available.

That data is available and linked to in the article. If you want numbers on how many swimmers on teams have competed in their top events so far, check here: https://swimswam.com/ncaa-october-performance-who-is-faster-so-far/
(that data is a week old)
If you want data on qualify of competition, I don’t really have a strength of schedule metric, but many the top teams have swum each other so far. There was the Florida/Indiana/Texas meet. Virginia swam Auburn. Georgia swam Florida. The volume of repeated October swims is in line with previous years indicating a late start to the meet season isn’t a factor.