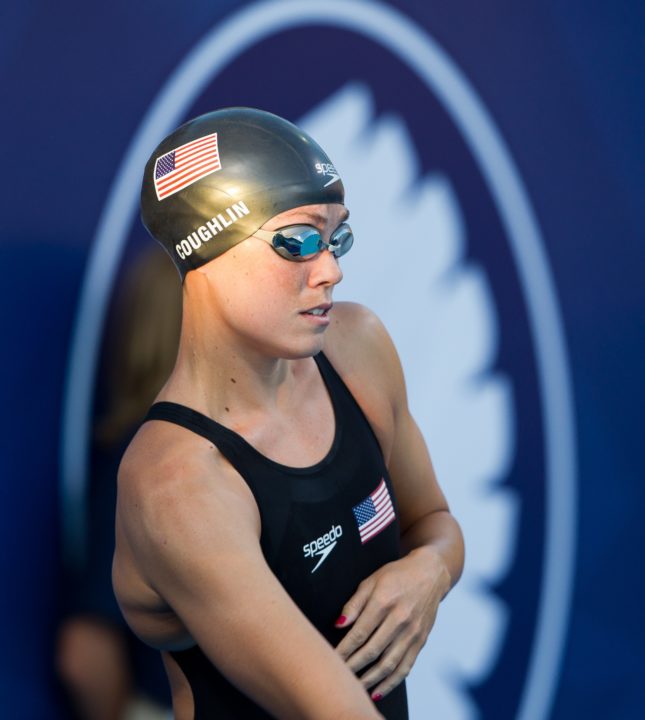 American Olympian Natalie Coughlin was featured on Food Network’s Chopped on Tuesday, where she made it all the way to the final before falling to NASCAR driver Danica Patrick in the final round.

Coughlin competed in the Sports Stars episode against Chuck Zito, Tiki Barber, and Patrick, with one participant being eliminated, or “chopped,” in each round. The judges said that they felt that Patrick was the better in two of the three rounds, and thus gave stock car driving’s golden girl the edge.

In that final round, Coughlin made bread pudding, as the challenge required her and Patrick to use protein powder, caramel popcorn, tangelo, and olive oil cake. Patrick opted for a chocolate and peanut butter “dessert sandwich”.

Patrick’s charity, the COPD Foundation, received a $10,000 donation in honor of her win, while Coughlin was playing for Right to Play, an organization that uses sports and games to enhance child development in areas of disadvantage.

Coughlin fell for what Chopped diehards call “the bread pudding curse,” as bread pudding is a frequent dessert choice, but rarely wins, for contestants (who are usually, for what it’s worth, professional chefs).

In the first round, she made a candy peanut crusted salmon appetizer (the required ingredients were salmon fillets, candied peanuts, kale, and to top it all off Gatorade). In the second round, she made a beef medallion dish with almond milk and a creamed spinach base. The required ingredients there were filet mignon, spinach, almonds, and chocolate covered marshmallows for a twist, with Coughlin actually making her own almond milk out of the almonds.

Garrett Weber-Gale needs to get on this show!!!!!

He spent 5 weeks in 2010 here in France in Roanne at La Maison Troisgros, one of the most famous restaurants in the world.

Actually, now that I think about it. He and Natalie should co-host a cooking show. I would TOTALLY watch.

Actually, they should have separate shows.

Garrett is all about super fancy gourmet stuff.

Natalie is about the fancy as well…but mostly what you can make from a good garden.

Different themes I suppose. Regardless, I would totally watch.

Wow. I’ll need to catch this episode next time it’s on.

in a related aside, she’s not the only swimmer-foodie. Eamon Sullivan planned to become a chef or run a restaurant or cafe before his swimming became world class, and won Australia’s Celebrity Masterchef in 2009, with one of his dishes getting three perfect 10s from the judges. I got to meet one of the judges at a later event and asked him about it, and he told me that it was genuinely outstanding, something that could have come out of a Michelin starred restaurant. He now has a cookbook out and runs a solid restaurant of his own.

I’d like to see 1992 Olympic gold medalist Nicole Haislett on their. After the games she trained to be a chef at the Florida Culinary Institute

The bread pudding will lose 97% of the time. It was a fatal decision.

They could have done better than those guys. Seems like they never ever even heard of Salmon before. No competition for the gals.