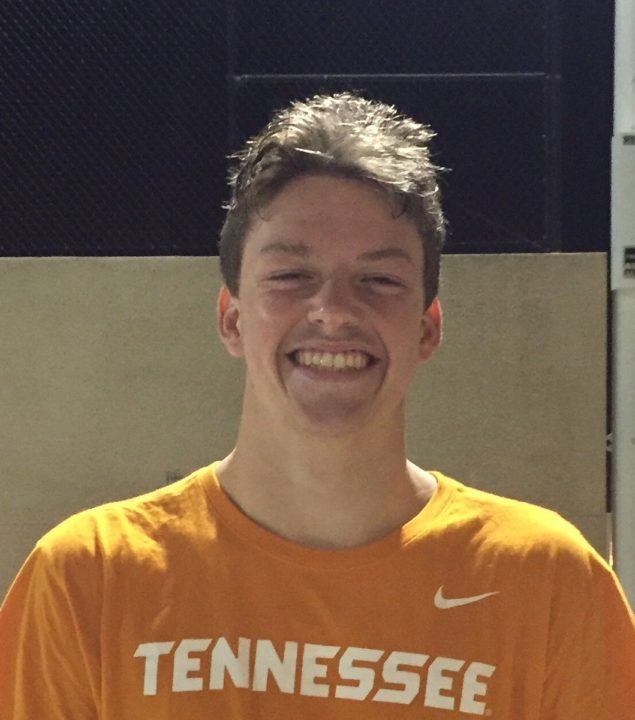 Ben Blevins-Boor, who swims for Irvine Novaquatics and Sonora High School, has made a verbal commitment to the University of Tennessee for 2017-18. Current photo via Ken LaMont

Ben Blevins-Boor, a senior at Sonora High School, has made a verbal commitment to swim for the University of Tennessee in 2017-18. Blevins-Boor is the reigning CIF-Southern Section Division II champion in the 100 free and the bronze-medal winner in the 100 back. A two-sport athlete until his junior year in high school, Blevins-Boor gave up playing water polo to concentrate on his swimming. It paid off quickly, too, as he made immediate progress in his top events. As a freshman he had been a consolation finalist in the 100 free and 100 back; the following year he was third in the free and 12th in the back. By the time he won the 100 free in a personal-best 45.60 at the 2016 CIF-SS D2 finals, he was the fifth-fastest among all 100 free swimmers, across all four CIF-SS divisions.

Blevins-Boor swims year-round for the club team Irvine Novaquatics. He was the leadoff (24.22) of the National Age Group record-breaking boys 15-16 200 meter free relay this past February, at the Lakeside Stampede in the Westside Aquatic Center in Lewisville, Texas. It was a huge meet for Blevins-Boor, personally, as he notched best times in 50/200y free, 50m free, 100y back, and 50/100m back at the meet.