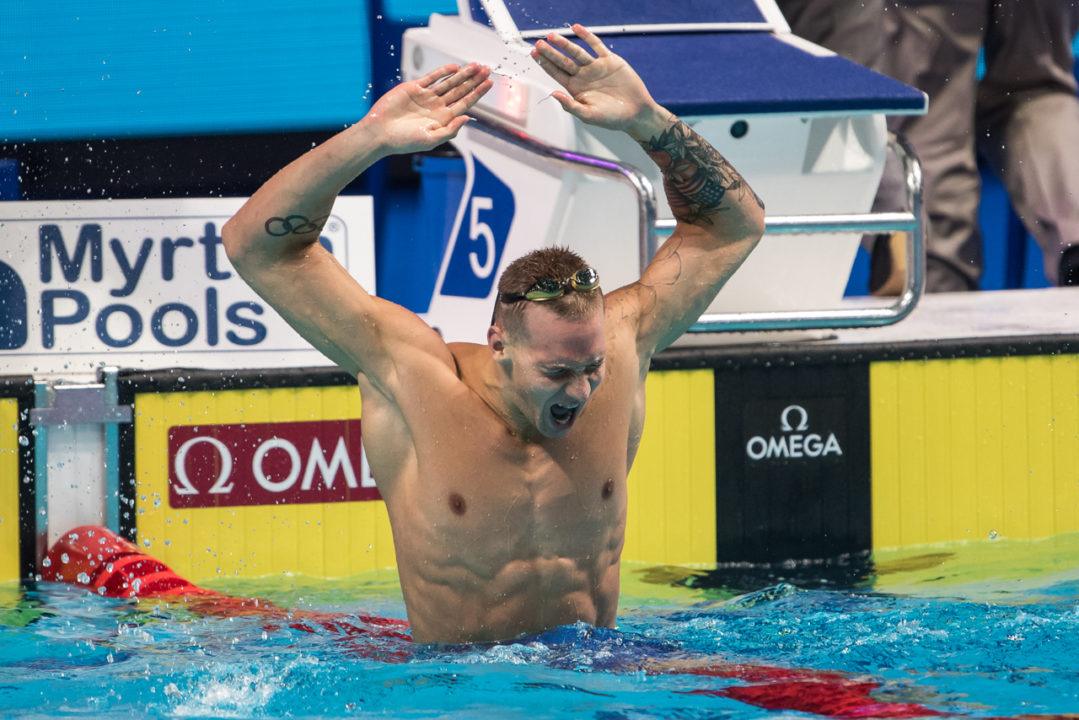 Unlike some of the events where the U.S. men have reigned supreme, such as the backstrokes, butterfly’s and IMs, the sprint freestyle events have consistently had a wider spread of champions and medalists worldwide.

When Caeleb Dressel crushed the men’s 100 free final tonight in Budapest, lowering his own American record in 47.17, he became the first American, male or female, to win the 100m free world title since 2001.

That year marked the only time Anthony Ervin won a major international medal in the 100, as he used his blinding speed to get out ahead and managed to hold off Olympic champion Pieter van den Hoogenband (despite a timing error that initially had the Dutchman winning).

For the American women, they haven’t won since Jenny Thompson did in 1998. However, we can’t forget about Simone Manuel‘s 2016 Olympic triumph, or for that matter Nathan Adrian‘s in 2012.

However, Dressel looks to be solidifying himself as the next great superstar in men’s freestyle sprinting. He won the title by a full seven tenths of a second, the biggest margin of victory since 1986, when American Matt Biondi (48.94) defeated Frenchman Stephan Caron (49.73) by 79-one-hundredths.

American sprinting is certainly in good hands as Dressel continues to stake his claim as the best male sprinter in the world right now.

He now has three gold medals in Budapest, with potentially five more opportunities. He’ll swim the 50 free and 100 fly individually, though the two coincide with each other, and will definitely swim fly on the men’s medley relay after his historic 49.9 split in the mixed event.

There’s a chance he could be used on the mixed 4×100 free relay, though that would entail him doing a triple during the finals session. He also qualified to swim the men’s 4×200 prelims, but will almost definitely be left off with 50 free and 100 fly prelims occurring shortly prior.

The Americans added three golds on day 5 to triple the next highest total of 3, which both Great Britain and China have. China has less than half their medal count of 20 with 8, sitting in 2nd place.

Now…can he be the first textile swimmer under 47? I think…YES!!!

One step at a time.He is now the man to beat in the 100.Now, he will need to sustain that, not forgetting there are some young guns(like Chalmers and Cartwright) on his tail.

I didn’t see Chalmers in the finals and Cartwright didn’t medal.

Chalmers is out recovering from a surgery. Cartwright is two years younger and this was his first big meet.

Dressel out swam both of them in the 100 free and will continue on this path of sprint domination.

My point is: They are BOTH younger than him.BOTH have starts and turns a lot worse than him.Right now, he is in a rare path to blast the best sprint double(50/100) in the same competition.
Sprints got so much specialized it is very rare to do a best 50 and a best 100 in the same competition, and I think Dressel is on the right path to do that.It is very hard to get at the top.It’s even harder to stay there.

Proud has gone 21.3 and Fratus looked good in relay. That’s should be an interesting 50free, particularly since it coincides with the 100 fly.

Yeah, I think(besides Dressel, of course) Proud and Fratus are the ones to watch.Proud is always lowering his times(comparing with his trials) and I would not be surprised to see him doing 21.2.Fratus did six in season sub-22, what never happened before in his whole career.
It’s funny to see Cielo(a straight 3-time winner in four finals) as an underdog.

Chalmers had a heart operation about two months ago.
Was well published on this site.

When you’re .18 out, that seems like the next step.