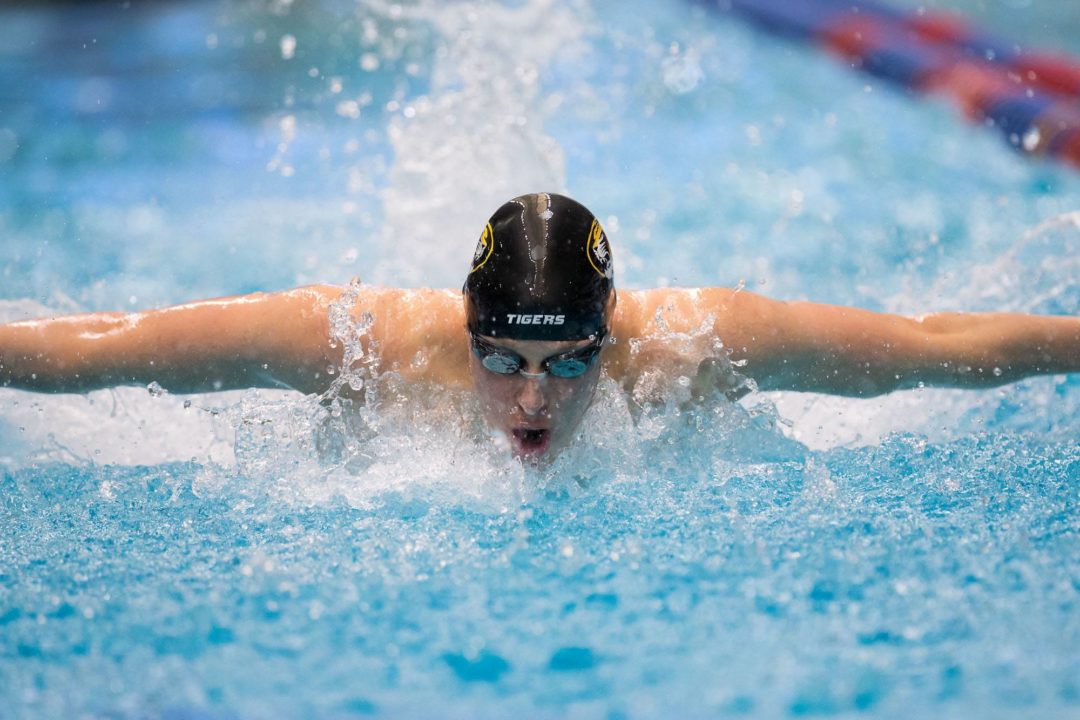 Mack Darragh was one of three Mizzou record-breakers during Day 3 prelims of the Mizzou Invite that helped the Tigers secure top spots going into the finals session. Archive photo via Tim Binning/TheSwimPictures.com

The Tigers took home wins in every event during the Day 3 prelims session of the Mizzou Invite, as well as a few more school records in the process. Both the Mizzou men and women have set themselves up for even more record-breaking performances in finals tonight.

Mizzou’s Hannah Stevens took the top spot with a 1:54.27, an NCAA B cut ahead of a pair of Florida International University swimmers. Panthers Silvia Scalia (1:55.76) and Karin Tomeckova (1:57.46) touched in second and third, and also swam under the Division I NCAA B standard. Drury University’s Katya Rudenko secured a Division II NCAA B cut with her fourth-place swim of 1:59.00 going into finals.

Tiger Carter Griffin (1:43.05) touched just one tenth of a second ahead of  teammate Austin Fish (1:43.15) for a 1-2 Mizzou sweep, as well as a pair of swims under the Division I NCAA B standard. Following up for third, Drury University’s Sean Feher claimed a Division II NCAA A cut with his time of 1:45.47. Mizzou Tiger Grant Kelton touched fourth in 1:46.86 to add to Mizzou’s point potential for the upcoming finals session.

Mizzou’s Dani Barbiea touched first (48.89) ahead of Tiger teammate Rachel Hayden (49.58) for another 1-2 Mizzou positioning going into finals. Both girls also swam under the Division I NCAA B standard. Nebraska’s Taryn Collura followed up for third with an NCAA B cut of 49.82, while Drury University’s Wen Xu secured a Division II NCAA A cut with her fourth-place swim of 49.90.

Mizzou’s Michael Chadwick dropped the first Tiger school record of the prelims session with a 42.86, securing a Division 1 NCAA B cut in the process. UNLV’s Tom Paco-Pedroni touched second under the Division I NCAA B standard (43.26), just ahead of Drury University’s Daniel Rzadkowski (43.67), who finished in an NCAA Division II A cut.

Mizzou took the top four places in prelims, securing some serious point pick-up in tonight’s finals. Leading the pack was Tiger Abby Duncan who edged under the Mizzou event record with her NCAA B cut swim of 2:10.03. Her teammate Lauren Stoeckle was second with another NCAA B cut of 2:13.93. Third was Mizzou’s Dani Spradlin (2:14.82), who was just five one-hundredths of a second ahead of her teammate Katharine Ross (2:14.87), with both swimming under the NCAA B cut.

Mizzou teammates Sam Tierney (1:53.93) and Igor Kozlovskij (1:56.38) took the top two spots moving into finals, with Tierney coming within a few tenths of the Division I NCAA A cut. Both swimmers secured NCAA B cuts with their performances. Teammate Mark Conroy was third, swimming under the NCAA B standard with a 1:58.35. Drury University’s Banjo Borja claimed a Division II NCAA B cut, touching fourth in 1:59.36.

Mizzou’s Sharli Brady came within striking distance of the Tiger’s school record, swimming a Division I NCAA B cut of 1:58.43. Second-place Florida International University’s Valerie Inghels was just under the NCAA B cut as well with a swim of 1:59.44. Mizzou’s Erin Metzger-Seymour followed up for third in 2:00.91.

Mizzou snatched five of the eight spots in the championship heat going into finals, with Mack Darragh leading the pack and taking down a school record and an NCAA B cut with his 1:43.98. His teammates Daniel Graviss (1:45.72) and Andrew Phillips (1:45.78) touched second and third with NCAA B cuts as well. The next two finishers, UNLV’s Balint Batka (1:46.48) and Mizzou’s Martin Wallace (1:47.52) also took down NCAA B cuts.