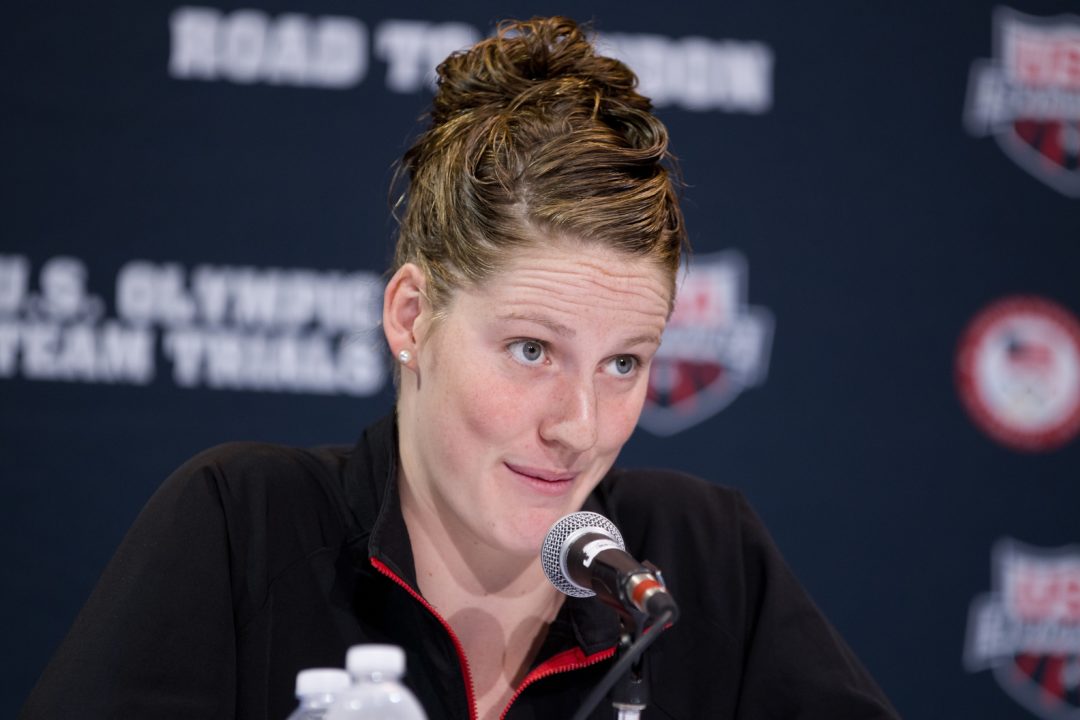 It may be just the first major American meet after the 2012 Summer Olympics, but the most elite of the U.S. swimming crew are already looking sharp after day 1 of the Minneapolis Grand Prix on Friday. That included a National Age Group Record by Missy Franklin in her fall debut, with Ryan Lochte looking very sharp as well.

Of note, Lochte’s Gator Swim Club teammate Conor Dwyer seems to have not made the trip to Minnesota for this meet.

Missy Franklin kicked the meet off with a roaring 200 free of 1:42.28: a fantastic time for anybody in early November. There have been echoes of concern about how her long course exploits would translate to yards for college swimming when she goes to college next year, but she kicked her season off here with a best time in this 200 free by nearly a full second.

That time is easily better than the National High School Record, and though the time doesn’t count toward those record books as this Grand Prix is not a high school meet, but it would be a shock if she didn’t take down that record, even without a full taper for the Colorado High School State Championship meet. What it can break, though, is the 17-18 National Age Group record, which it did easily.

That old NAG Record of 1:42.61, and current high school record, belongs to one Dagny Knutson, who after a significant amount of time away from high-level competition while battling health issues made her return at the University Aquatics Center. So far, now back in North Dakota training with her old club, she looks very good, taking 2nd in this race in 1:46.70. That put her ahead of Olympian Chloe Sutton, who took 3rd in 1:47.20.

Jessica Plant was 4th in this A-Final in 1:47.90, confirming what was suspected anyway: the hosts from the University of Minnesota are suited and rested for this meet (they had a few mornings off this past week). Just a sophomore, the Canadian is looking to build on an impressive freshman season. She’s now the Big Ten leader in the event, as she awaits the rest of the conference to hit their mid-season focus meets. Her former teammate Ashley Steenvoorden was 5th in 1:48.20.

The B-Final highlighted the youth of the meet, with 15-year old Katie McLaughlin from Mission Viejo winning in 1:48.73 and 16-year old Cameron McHugh from Katy, Texas touching 2nd in the heat in 1:48.96.

In the very next event, Ryan Lochte won the 200 free in an also great 1:35.15. That’s his best time in three years, and like many of the swimmers down in Gainesville he’s swimming unusually well early this season. He outswam Danish distance swimmer Mads Glaesner, who trains at Trojan in LA, by a few tenths, with Glaesner touching 2nd in 1:35.69.

This was a Big Ten dominated women’s 100 breaststroke, and it was the former Wisconsin Badger Ashley Wanland who upset her Canadian foes in this race with a 59.96 for the victory. It’s really exciting to see Wanland is continuing to train past the Olympics, because it has felt like she’s got more to give to the sport at only 22 years old.

Jillian Tyler, a Minnesota post-grad, outraced her freshman training partner (and fellow Canuck) Kierra Smith 1:00.32-1:00.43. The 3rd Gopher in this race, Haley Spencer was 4th in 1:02.78. She’s the 2011 NCAA Champion in the 200 breaststroke, but is by far better in that race than the 200. Watch for her to be right in the thick of the race with Smith and Spencer.

We talked in the preview of the trio of 13-year olds from the state of Nebraska swimming in this 100 breaststroke, and they did not disappoint. Ashley Pales was 7th in the A-Final in 1:04.76, Olivia Calegan from Lincoln Select Swimming was 10th overall in 1:05.18, and Dannie Dilsaver was 13th in 1:06.14. There was even a 12-year old, Lianna Wood, in that B-Final in 1:06.84. This is great experience for some young swimmers.

In a battle of two former NCAA Champions, though different events, Mike Alexandrov and Carlos Almeida squared off for the first time in the 100 breaststroke. Scott Weltz, 2012 U.S. Olympian, was also in this race.

One would guess that the 200 will be between Almeida and Weltz, though Alexandrov has shown to be very good in the 200 in yards as well.

Among other notable times, a pair of high school swimmers, Conner McHugh (55.76) and Jacob Molacek, (55.97) went 1-2 in the B-Final. That’s just off of a best time for McHugh, and is a best time for Molacek.

Also in the B-Final was local Masters Swimmer Brian Jacobson. He’s 38-years old, and is one of a growing group in their late 30’s and early 40’s who have qualified for the Olympic Trials not as full-time swimmers. He was 13th in 57.82, swimming in grave juxtaposition to 13-year old Michael Andrew, who was 14th in 58.14. He is the 11-12 National Age Group Record holder in the event, but now with football season over has cracked a minute for the first time, and a best time by nearly two seconds. He’s already in the top 30 of 13-14 year old Americans all time, despite being just barely into the younger end of that age group.

This was one of the few races at this meet that featured only one National Teamer, but that one Claire Donahue did not disappoint. She swam a 52.71 to dominate this race.

Katie McLaughlin from Mission Viejo had yet another very good swim to take 2nd in 54.31. Minnesota’s Rebecca Weiland was 3rd in 54.33, followed by her teammate Tori Simenec in 54.69. The fastest Golden Gopher was actually Blake Zeiger, who won the B-Final in 53.99 – already four-tenths better than her personal best. That’s not a bad way to begin her sophomore year.

In swim number two of her comeback, Dagny Knutson was 5th in the A-Final in 55.09.

Ryan Lochte took win number two, this one coming in the 100 fly in 46.73. Lochte is swimming this race in short course meters at this winter’s World Championships, and with that swim to start off his year, he could be a medalist (not that this is a surprise to anyone).

The youth in this 400 IM women’s A-Final was unbelievable, as 6 of the 8 A-Finalists were 16-or-younger. 14-year old Makayla Sargent was 5th in 4:24.82, and 13-year old Isabella Rongione was 2nd in a best time of 4:21.21; but it was 14-year old Becca Mann from the Clearwater Aquatics Team who looked really fabulous. She made multiple Olympic Trials finals and earned her way onto the Short Course World Championship squad, and this swim showed it was well deserved.

She dominated the field in 4:10.29, winning by 11 seconds in a new personal best. She now jumps to 2nd on the all-time 400 IM list in the American 13-14 age group, behind only Katie Hoff who was a year away from an Olympic Team. That comes in her first meet of the yards season, too. That’s an unreal swim.

Becca Mann is only 14??! I remember her from Olympic Trials and thought she was 15 even then. 4:10 IS unreal this early! Awesome swim by Missy, and welcome back, Dagny!!

Well, it was a very fast session. No C-Finals, no ceremony medals between the races. I’d say Missy has a pretty good start of her season. 1.42.28 is impressive. Don’t forget her previous record was from the Colorado high school state championships and it was at altitude level. Perhaps she’s already at the same level of performance or a little better. She hasn’t trained a lot since the olympic games, I think she was rested for this weekend. If not, she will swim 1.40 in 3 weeks at the american short course championships. Happy to see Dagny Knutson back in the water too. Ryan Lochte looked much less tired than usual. Hard to judge his level of shape because he’s… Read more »

Ok, excuse me, there are C-Finals and D-Finals but I think they are before or after the A-Finals and the B-Finals sessions.